The 6-minute breakfast that gets me through the day, every day

Why soft-boiled eggs are perfect for one 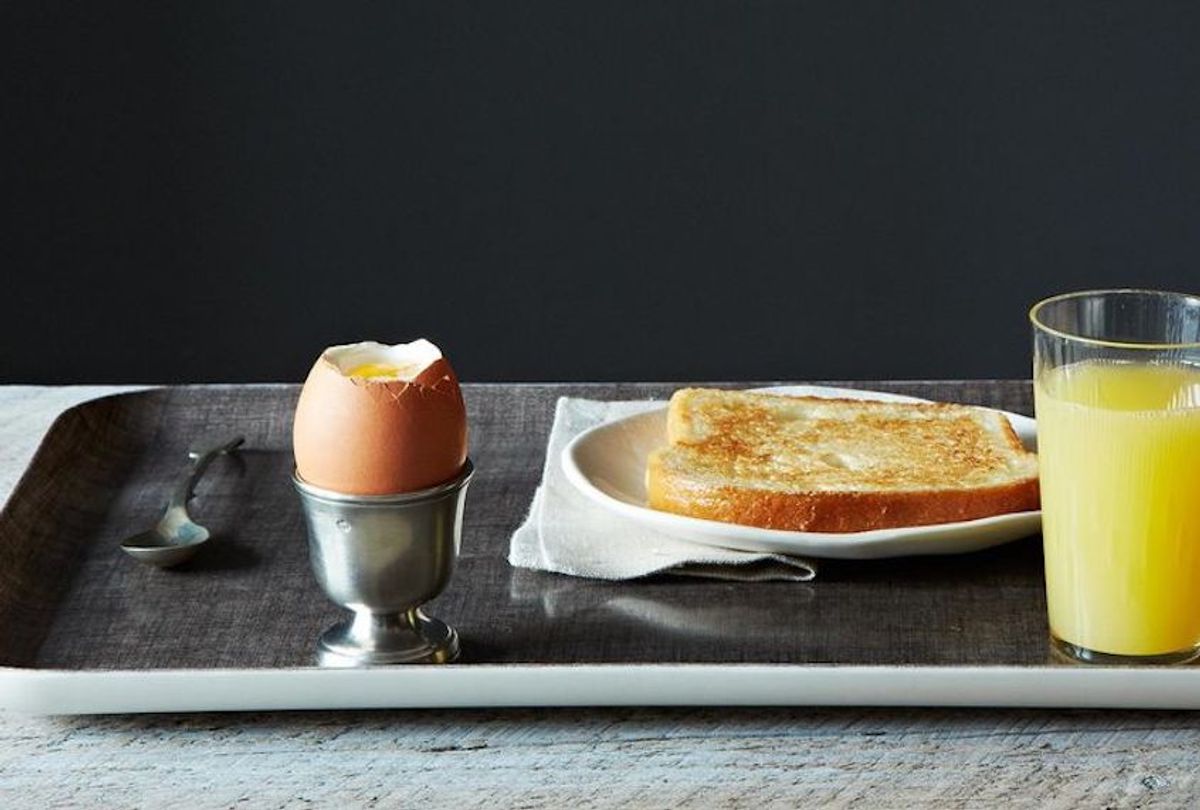 When it comes to breakfast, we all have our go-tos. It is, for me, the one meal of the day when I feel zero remorse whatsoever for repeating myself, rarely straying to other sources of protein, carbohydrate, or fructose. Because when something works, it works.

On the weekends, maybe, I'll cook bacon or have a brekkie quesadilla from leftovers. But even in those moments, I'll always have my egg first, boiled straight from the fridge in a tiny pot of water for six minutes, then propped up in its cup on a small plate dusted with Magic Spice™, my signature concoction of secrets and herbs: brown sugar, salt, paprika, garlic powder, black pepper, cayenne pepper, and celery seed.

Here's how to make a perfect soft-boiled egg:

The eating of this egg is mostly ritualistic: I take a sharp knife and chop off its top, scooping up the bit of white that's there. I sprinkle the spice mixture over the beheaded egg and dive my spoon into the yolk, which, if I've cooked it correctly, gushes out. Every time I do it, I feel a great sense of satisfaction at how dramatically the yellow dribbles out over the sides and onto my plate. I use the toast to sop up this spillage, and dig my spoon into and around the shell to get the rest of the white.Even when I think I want a second egg, I'm reminded of that first breakfast scene in 2018's "Call Me by Your Name," where Armie Hammer's character eats a soft-boiled egg with such luscious fervor, he makes it look like the most delicious thing in the world. When his host family offers him another, he refuses. "No, no, no. I know myself too well," Oliver chuckles, pouring himself a glass of apricot juice. "If I have a second, I'm just gonna have a third and then a fourth, and then you're just gonna have to roll me out of here."

In André Aciman's novel, from which the Academy Award–winning film is based, the protagonist Elio (played by Timothée Chalamet) narrates, "I had never heard someone his age say, I know myself. It intimidated me."

I wouldn't go so far as to say that my single egg makes me feel especially surer of myself. But that scene, both in the book and in the film, showcases how satisfying it can be to eat just one perfectly soft-boiled egg. Whether you're having it on its own or with Magic Spice, toast, and orange juice, it only takes an egg to start the day feeling in control and filled with purpose.

I'm not a breakfast person, but what this micro-meal has taught me is that, if I can make a habit out of putting on the coffee first thing in the morning, along with the water, toasting a slice of good sourdough from my local bakery, and boiling a single egg — then it forces me to pause, if only for one brief moment, while I sit to eat. What better time to have that feeling of calm than at the start of my day?

This, in turn, makes me appreciate the morning more (which is helpful for someone who is 100-percent not a morning person). What this means, as well, is that I can go to work feeling less harried than those dark days when I used to stumble out of bed and crash into the office like a storm. Instead, I walk. I feel cool, calm, and collected by the time I make it to my desk, mind and body ready to go until lunch.

Is it celery juice blended with Kardashian-branded protein powder? No — but I’d say it’s just as fortifying.