The Apple event unleashes Apple TV+: A star-studded show about… nothing

Apple announces its original content line-up with a lot of who's who, but no details on "when" or "how much" 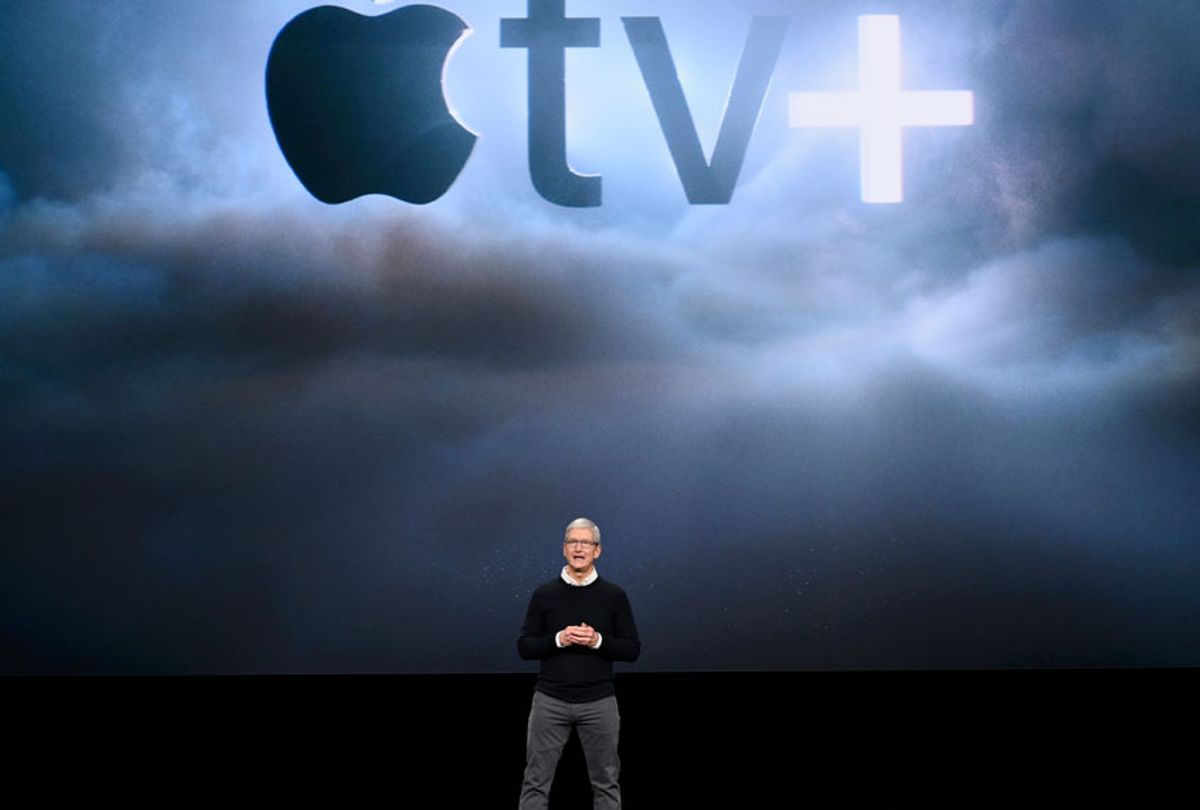 Silicon Valley runs on concentrated hype, with a cold brew of bluster on the side. Every product debut is declared by those doing the debuting as game-changing, disruptive, a means of redefining the marketplace. Few, in reality, do. Some actually catch fire and explode.

All of that put together made the spectacle that was Monday's 2019 Apple Event, brought to the world via live video stream from Cupertino, Calif., another level altogether of announcing very little beyond the name for its new TV venture titled — drumroll, please — Apple TV+.

What’s great about Apple TV+ is that it’s impossible to hashtag #AppleTV+ on Twitter without awkwardly spelling out the word "plus." For the sake of Earth Day, it’s also brilliant that Apple is recycling the plus-sign designation from Google+, which no longer needs it, because — due to a security flaw that exposed users’ profile data — Google is shutting that service down in a little over a week from now.

What it will be, according to executives, is an ad-free subscription service that will be available in more than 100 countries at launch.

This is why, for example, Hailee Steinfeld, Mark Duplass and Chris Evans were among the celebrities sighted; at one point during the videocast the producer cut to a shot of Evans in the audience, looking very bored. (Or slack-jawed at the wonder of it all, who knows.)

It must also be said that Apple TV expansion wasn’t even announced until about 50 minutes into the "event," after announcements that Apple was updating its Apple Pay service with a credit card in partnership with Goldman Sachs; that it would now charge $9.99 a month for a news subscription service; and that it was debuting a game subscription service called Apple Arcade. And, for that matter, after Apple TV (no plus) revealed a significant update to its service. More on that later.

Apple TV+, meanwhile, is the name for its stable of originals, “dedicated to the best stories ever told.” Not like those other channels you’re paying for. To back this up, the lights go down and a video plays with the likes of J.J. Abrams, M. Night Shyamalan and Steven Spielberg talking about what makes film the greatest storytelling medium. This is entirely rendered in black and white, and includes footage of a woman floating up to the sky on a wire, so that we know how serious they are about all of this.

Then comes the piece de resistance: the movie ends, the lights come up, and there’s Spielberg onstage at the Steve Jobs Theater, talking about partnering with Apple to reboot his anthology series “Amazing Stories,” which first aired on NBC nearly 34 years ago. (Of course, this was announced last year.)

Ditto for Aniston and Witherspoon’s project, now titled “The Morning Show,” which now also stars Steve Carell, who joined his co-stars onstage. This series, based on Brian Stelter's "Top of the Morning: Inside the Cutthroat World of Morning TV," marks Aniston and Carell’s return to series TV since departing for their movie careers.

In fact, every project Apple showed off on Monday was previously announced in various trade reports on the tech company’s original project binge, which went down almost a year ago. This includes “See,” Steven Knight’s post-apocalyptic epic in which everyone left in the world is blind, starring Jason Momoa and Alfre Woodard.

Abrams and Bareille took the stage to promoted their dramedy “Little Voice,” and Bareilles crooned the theme song for event attendees. Nanjiani talked a bit more about his half-hour anthology series “Little America," which profiles the immigrant experience through an array of stories.

In fact, the tallest surprise among the celebrities was Big Bird, there to introduce Sesame Workshop’s newest “monster” Cody, host of the new Apple TV+ show for kids, “Helpsters,” which is focussed on teaching preschoolers how to code. Resistance is futile.

As for the other details on Apple TV+ — like how much the service will cost, or when its first series will debut, or which series that will be, or whether that series will drop an entire season at once or roll out one episode at a time, or any preview clips — never mind all of that, for here is Oprah.

The Queen of All Media explained that she was joining forces with Apple, “because they're the company that has re-imagined how we communicate,” she told the audience in Cupertino. “I've joined in order to serve this moment. Because the Apple platform allows me to do what I do in a whole new way, to take everything I've learned about connecting to people to the next level.”

Also, and here’s the really important thing, “Because they're in a billion pockets, y'all. A billion pockets. The whole world's got 'em in their hands. And that represents a major opportunity to make a genuine impact.”

To that end, Oprah announced she is producing two documentary projects for Apple TV+, one a feature with the working title “Toxic Labor,” and the other a yet-to-be named multi-part series focused on mental health.

As interesting — if not more from a business perspective — is Oprah’s announcement of a deal to build “the biggest, the most vibrant, the most stimulating book club on the planet.”

With Apple, not Amazon.

Currently Oprah’s Book Club has a vertical within Amazon’s website. Amazon is also the main media home online for Oprah’s Favorite Things, the mogul’s annual list for gift recommendations. However, when it comes to leveraging her literary influence in the video space, the fact that she chose Apple makes a loud statement about her perception of reach.

“Imagine, where Apple stores stream a conversation with the author and me live across all devices, across all borders, uniting people to stories that remind us that no matter who you are or where you’re from, every man, woman and child looks up in awe at the same sky,” she said. “So I want to literally convene a meeting of the minds, connecting us through books.”

Before Apple TV+ becomes available to consumers — ambiguously stated as some time this fall, according to executive Zack Van Amburg, who introduced the celeb-a-thon alongside his partner in Apple’s TV unit Jamie Erlicht – the company will introduce a software update due in May to serve as an a la carte access to cable channels.

The idea is that subscribers would pay for only the content they select, which would stream ad-free, as well as online or to download for offline playback. At launch consumers would be able to access HBO, Showtime and Starz through the service — all channels that already sell add-on subscriptions that allow consumers to stream their content without paying for a full cable package. Apple’s pitch is that its app allows subscribers to stream that content without having to launch separate apps or going to a third-party service.

As part of this, Apple plans to add support for Amazon Fire devices, Roku and iMacs, as well as apps compatible with smart TVs made by Sony, Samsung, LG and Vizio. Among the unknowns is whether consumers will be available to view Apple TV (original flavor or +) via desktop browsers like Firefox, Microsoft Edge or Google Chrome.

Nor did the company mention anything about making its original available to iPhone-shunning heretics who defy the will of Tim Cook by insisting on using Android or other non-Apple devices.

To hear the applause from event attendees and marvel at the caliber of star power Apple was able to attract to the company's Cupertino-based headquarters on a Monday morning, a casual observer might be blinkered into thinking the company is on the verge of the extraordinary.

This is before one takes into account the services that fall into the remaining two percent of that streaming pie, including CBS All Access. Also, by the time Apple plants its flag in this space, it’ll also be contending with streaming services from AT&T, which now owns Time Warner (and the DirecTV satellite service), as well as Disney, which just completed its acquisition of the lion’s share of what was once 21st Century Fox.

It also helps to remember, as the New York Times pointed out in a story that also ran on Monday, that a few short years ago Apple leapt into the world of high fashion with the intent of marrying tech with couture in the form of “wearables.” Nowadays, such accessories are commonplace enough to almost be déclassé.

In this round, Apple isn’t at the forefront with regard to streaming content. It is catching up in a game where its competitors have deeper benches of content to draw up on and a significant reach of their own. And others who should be as well-positioned to get in this game, including YouTube, are pulling back or bowing out altogether.

In essence, then, what Apple revealed to the world on Monday is what we already know: it’s a company that invests in very good-looking products and glamorous producers, and knows how to hype them. But it is entering a marketplace and a medium that makes its own stars, not the other way around. And it might be in for the realization that its TV ambitions may have ripened a bit too late.

Regardless of what happens,  the Oprahs, Witherspoons and Spielbergs of the world will be fine.