Did cheese lead to chatter?

Or, how softer foods gave rise to labiodentals 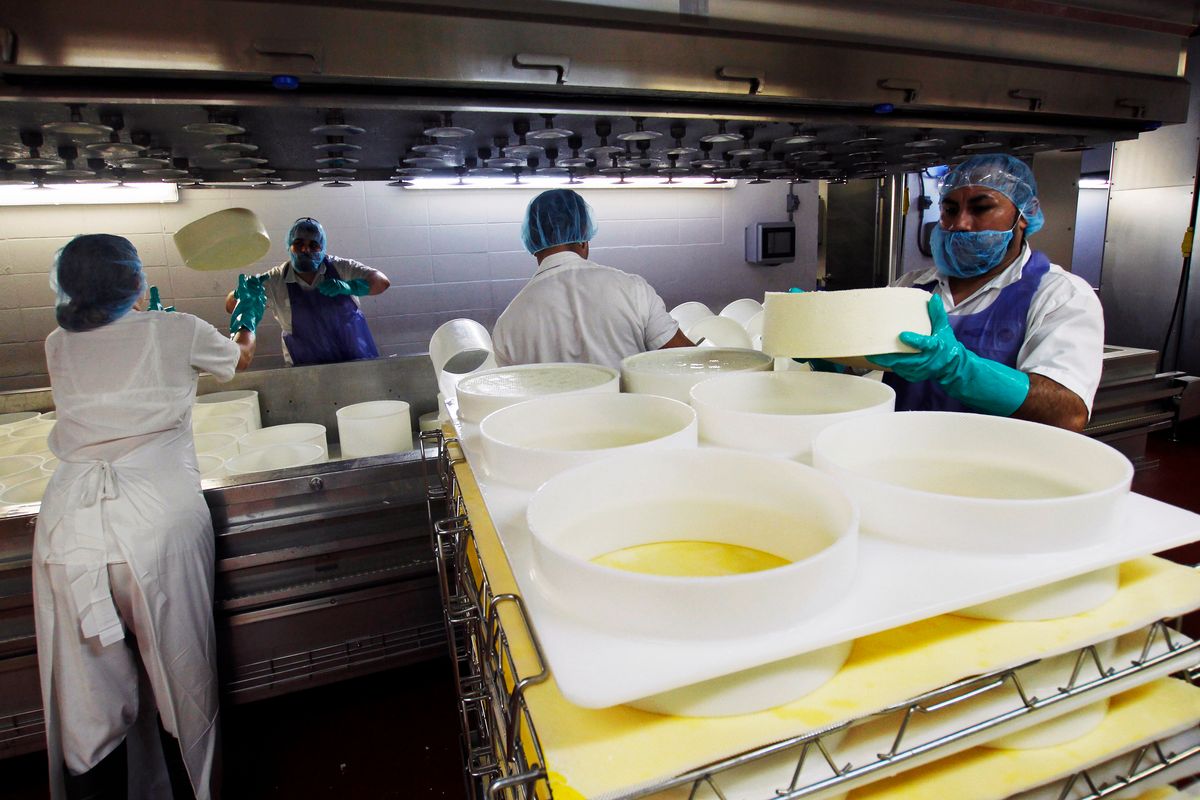 In this Feb. 27, 2017, photo, Brenda Patterson, left, is about to catch a wheel of Grand Cru Surchoix cheese at the Emmi Roth USA production plant in Monroe, Wis. The company won the World Championship Cheese Contest in 2016 for the cheese and since then has seen an increase in sales of the cheese. The contest is organized by the Wisconsin Cheese Makers Association, which also organizes the United States Championship Cheese Contest that runs until March 9 in Green Bay, Wis. The contests are in alternate years. (AP Photo/Carrie Antlfinger) (AP)
--

A lot of human development stems from the leap from hunting and gathering to farming — how improved methods of growing food allowed us to concentrate on things other than hunting and gathering. Now scientists have linked that change in the way we ate to a change in our jaws, which in turn widened our vocabulary.

Lots of languages have similar sounds in them — sounds that are easy for us humans to make, like the “plosives” p and b, and vowel sounds. Then there are other more specialized sounds in some languages which developed over time, sheltered from outside influence. Think of the African Bantu language full of clicks, versus European languages and their intermingled vocabularies and sounds.

Now, an international group of linguistic scientists has linked the adoption of early food processing to a change in many languages spoken, and the emergence of a particular group of sounds. “Labiodentals” — f and v — are made by putting the lower lip up against the upper teeth. This isn’t something that seems very onerous to us, but for our early ancestors the jaw had a very different function, and because of that a very different form. This meant that the ‘ffff’ sound wasn’t readily available to them.

The theory has it that before humans started cooking meat and vegetables slowly in stews, grinding flour for bread, and processing milk for cheese and butter, they did a lot of chewing. So much chewing, in fact, that by adolescence they lost the overbite they were born with as their molars wore down and drifted forward, until the front teeth met in an edge-to-edge bite. The advent of these new practices made for softer foods, which set into motion a change in their teeth and jaws — and an advance in language. Because the teeth weren’t doing as much grinding, they wore down less, and the overbite stayed, which made it easier for their bottom teeth to meet their top lip.

The research group, led by linguist and senior author Balthasar Bickel at the University of Zurich in Switzerland, worked out that it takes 29 percent more effort to make the labiodental sound if the teeth meet in an ancient, edge-to-edge manner. They also found that people in areas with more of the f and v sounds were early adopters of farming, and areas of the world that have a more recent hunter-gatherer history have a quarter less labiodental sounds in their languages.

So next time you’re about to drop an “ffff” bomb, smile instead and say thank you to cheese.