If the 2016 elections were a pivotal moment for the federal courts, the 2020 elections could be infinitely more so 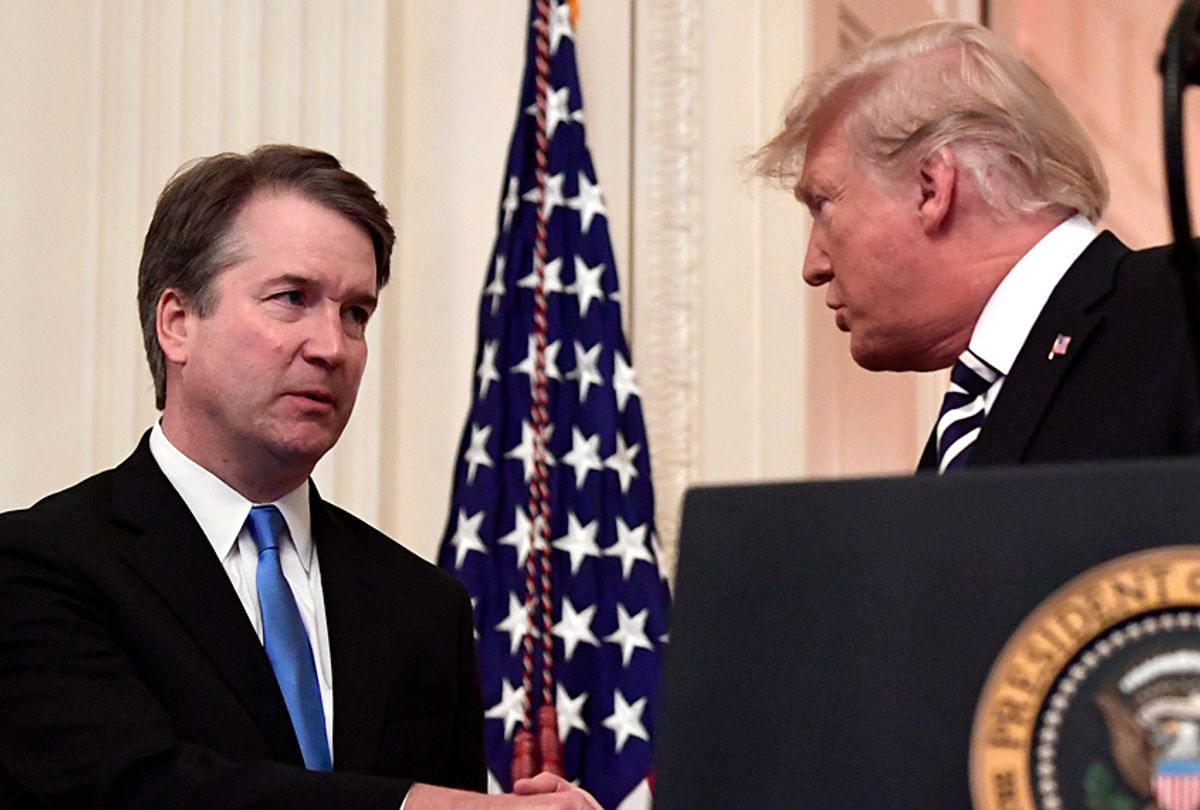 President Donald Trump, shakes hands with Supreme Court Justice Brett Kavanaugh before a ceremonial swearing in in the East Room of the White House in Washington, Oct. 8, 2018. (AP/Susan Walsh)
--

President Donald Trump is not very productive on policy, but one note of solace for conservatives — and horror for liberals — is that he has been very good at getting judicial nominees through the Senate.

With the help of Senate Majority Leader Mitch McConnell (R-KY), who left numerous seats vacant under President Barack Obama and blocked qualified nominees in the hope of getting a Republican president to fill them instead, Trump has put two judges on the Supreme Court — one of whom weathered accusations of sexual assault — and flooded the appellate and district courts with new judges.

But even Trump’s judicial confirmations haven’t produced the dramatic conservative shift in the courts that Republicans had hoped. As the Huffington Post notes, one of the reasons is that most of the vacancies Trump is filling were already held by Republican-appointed judges anyway:

Russell Wheeler, a visiting fellow in the Brookings Institution’s Governance Studies Program, crunched the numbers on this in December and found that 19 of Trump’s 29 circuit judges were replacing judges selected by other Republican presidents. HuffPost updated his numbers: 24 of the 36 circuit judges Trump has confirmed so far have replaced Republican picks.

The lower court judges Trump are appointing will be the final deciders in the majority of federal cases, as the Supreme Court only takes 100 to 150 appeals from the roughly 7,000 annual cases before the 13 circuit courts.

These new judges are overwhelmingly young, anti-choice, anti-voting-rights conservative activists, often alumni of the hard-right Federalist Society — and many of them are flamboyant characters. John Bush, whom Trump seated on the Sixth Circuit, compared abortion to slavery. James Ho, on the Fifth Circuit, has suggested the wealthy should have the right to bribe regulators and accused judges who don’t agree with his hardline anti-abortion position of hating Christians. Don Willett, also on the Fifth Circuit, wants to bring back the Lochner doctrine, an extreme-right early 20th century judicial philosophy that holds that “contract rights” nullify virtually all laws regulating labor and businesses. Some of Trump’s judicial picks are so extreme and unqualified that even Senate Republicans rejected them, like Brett Talley, who defended the Ku Klux Klan in college writings.

While Trump’s ideological impact of the courts has advanced slowly so far, it is not as if there has been zero change — this month, the Third Circuit officially flipped to having a Republican majority. And while no other Democratic-majority appeals courts have enough vacancies for Trump to flip them yet, that could change if he wins a second term, and some of the older Democratic judges could retire or assume senior status. Then, of course, there’s the matter of Ruth Bader Ginsburg.

If the 2016 elections were a pivotal moment for the federal courts, the 2020 elections could be infinitely more so.