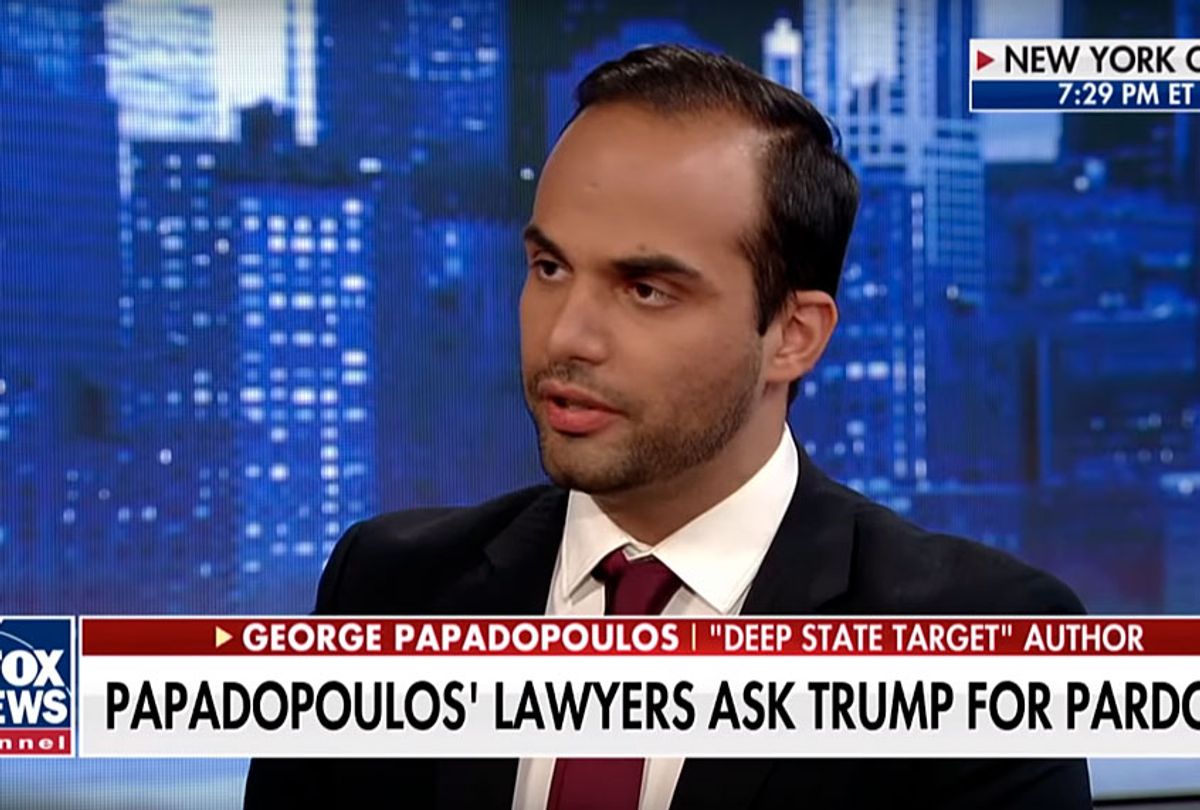 George Papadopoulos, the former campaign foreign policy adviser to President Donald Trump who pleaded guilty to making false statements to the FBI, revealed that his legal team has formally asked for a presidential pardon.

"I have no expectations for it. My lawyers — I know my lawyers have formally applied for one," Papadopoulos told Fox News on Tuesday. "If I'm granted one, it would be a tremendous honor and, of course, I would accept it."

Papadopoulos pleaded guilty to lying to investigators as part of Mueller's probe and served a 12-day prison sentence last year.

"You already spent 12 days in federal prison, which I'm sure was not a picnic. But I'm sure you'd like to have that off your record?" host Martha MacCallum asked Papadopoulos.

"Yeah, I would. I mean, I definitely would," Papadopoulos said. "It would be nice to move on with our — with my life. And my wife would certainly like to kind of forget this entire chapter and let — get this behind us."

The request from Papadopoulos' lawyers comes just days after special counsel Robert Mueller announced the completion of his investigation into allegations of collusion between Trump's presidential campaign and the Russian government during the 2016 election. Mueller did not find evidence to prove criminal collusion between members of the Trump campaign and Russia during the 2016 presidential election cycle, according to a brief summary of the special counsel's report released Sunday by Attorney General William Barr.

Papadopoulos, who was the first of five Trump campaign aides who pleaded guilty and agreed to cooperate with the special counsel, admitted he had lied to investigators about his communications with London-based professor Joseph Mifsud, who told him the Russian government had "dirt" on Democratic presidential candidate Hillary Clinton in the form of "thousands of emails." During the presidential campaign, Papadopoulos also met with a Russian woman, whom he believed to be Russian President Vladimir Putin's niece, in an effort to arrange a meeting between Trump's campaign and Russian government officials. Court documents described the woman only as a "female Russian national."

"I was trying to arrange a meeting with Vladimir Putin and Trump. Trump obviously wanted to have some sort of relationship with Russia. This individual promised that he could make it happen," Papadopoulos told Fox News on Tuesday, referring to Mifsud.

In the wake of Mueller's completed investigation into Russian interference in the 2016 election, there has been growing speculation over whether Trump will extend his pardon power to former aides and advisers charged with crimes in the special counsel's probe. Early in the investigation, Trump reportedly asked aides about his ability to pardon those implicated in the probe, including his family members, and asserted his "absolute right to PARDON myself."

During an Oval Office meeting Monday with visiting Israeli Prime Minister Benjamin Netanyahu, Trump was asked by a reporter if he had considered pardoning anyone who pleaded guilty or was convicted of crimes in Mueller's investigation. "No, I haven't," Trump said. "I haven't thought about it."