Have Vladimir Putin and Donald Trump just pulled off the crime of the century?

So, turns out you can conspire with a hostile foreign nation and get away with it if you don't mind doing it on TV 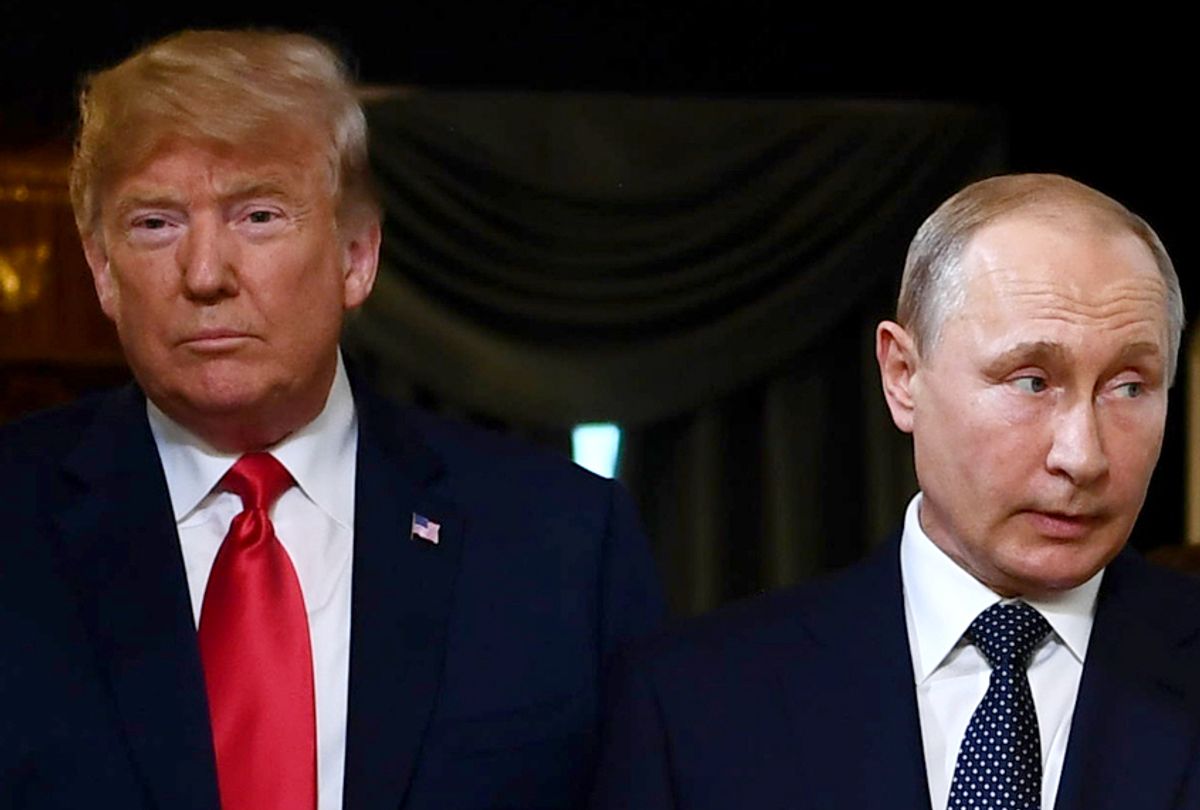 Did I miss news footage of 25 Russians in handcuffs being frog-marched off an airplane at Dulles Airport and put under arrest by FBI agents? I didn’t think so, because it didn’t happen.

Special Counsel Robert Mueller brought indictments in federal court against 13 Russian civilians for conspiring to interfere with the presidential election of 2016 by trolling American social media networks against the campaign of Hillary Clinton and on behalf of the campaign of Donald Trump. Twelve of those indicted were employees of the Internet Research Agency in St. Petersburg, Russia. The thirteenth was Yevgeny Prigozhin, a close associate of Vladimir Putin known as “Putin’s chef,” who funded the operation.

The special counsel also indicted 12 Russian military agents from the GRU, the main Kremlin intelligence service, for hacking into and seizing emails and campaign documents from the campaign of Hillary Clinton and the Democratic National Committee in an attempt to influence the election on behalf of Donald Trump. The Russian military intelligence agents were acting on the orders of Russian President Vladimir Putin.

The Russians indicted by Mueller were the men and women who kept the secrets about Russia’s campaign to get Donald Trump elected. They know how the propaganda efforts using false-flag ads and posts on Twitter, Facebook, and Instagram were put into operation. They know how the hacking of the Democrats’ emails and campaign documents were carried out and who GRU agents met with in order to distribute those documents. They know how the decisions were made about when to issue which tranches of documents, such as the huge cache of emails released on the day the so-called “Access Hollywood” tapes came out, and the damaging emails of Clinton Campaign chairman John Podesta just before election day.

But none of the Russians indicted for interfering with our presidential election were turned over to American law enforcement officials and extradited to the United States because Vladimir Putin wouldn’t allow it.

Forget Michael Cohen and the Moscow Trump tower deal. You want a quid pro quo? There it is. Donald Trump has consistently denied that the Russian government conspired to influence the election of 2016. So has Vladimir Putin. Donald Trump stood next to the Russian president after the Helsinki G-20 summit last year and told the world he accepted Putin’s word that the Russians had not interfered in our election. Putin helped Trump get elected. Trump helped Putin lie about it. If that’s not a quid pro quo, I don’t know what is.

You want a conspiracy? There it is. Trump and Putin have conspired to cover up the Russian government’s illegal campaign to influence our election, a crime that was confirmed by Mueller’s indictments of 25 Russian nationals for exactly that. Trump and Putin stood side by side in Helsinki and conspired right out in the open, on live television. One man, Putin, lied about the Russian conspiracy, and the other man, Trump, backed him up in his lie. Putin got a goof in the White House. Trump got to be the goof in the White House. If that’s not a conspiracy, I don’t know what is.

But according to Attorney General William Barr’s report to the congress, Robert Mueller didn’t bring any indictments for so-called “collusion” because the “Special Counsel did not find that the Trump campaign, or anyone associated with it, conspired or coordinated with the Russian government in these efforts despite multiple offers from Russian-affiliated individuals to assist the Trump campaign.”

Barr didn’t mention it in his report, but not once did anyone from the Trump campaign report to the FBI or any other law enforcement agency any of the “multiple efforts” by the Russians to “conspire or coordinate” with the Trump campaign. But that didn’t matter, because you could sum up Barr’s report in another way. Mueller found plenty of evidence of offenses, but no evidence of crimes.

Attorney General Barr’s report to the congress on Mueller’s investigation of the Russian attempt to influence our presidential election was four pages long.

With that kind of imbalance so nakedly evident, don’t get your hopes up about how much of Mueller’s report on his investigation of Russia and the Trump campaign Barr will release. He could reveal the whole damn thing, and it won’t matter. All the nasty, ugly shit the Trump people did in 2016 may offend our morals and our political norms, but it wasn’t criminal. We’re supposed to put aside all the times Trump has praised Putin and disparaged our allies, all of his false-equivalencies like “this country kills a lot of people too.” Nothing to see here, folks. Moving right along.

One of two things is true. Either Donald Trump is the most devious, brilliant criminal in United States history and pulled off the crime of the century by using the help of the Russian government to get elected, or the laws which protect the Constitution of the United States need some serious revisiting if we are going to maintain our democracy.

Donald Trump and Vladimir Putin taught us that in Helsinki.