Now Team Trump is out for vengeance: It's crucial that Democrats push back, hard

It's not just Lindsey Graham: Trump's flunkeys are trying to flip the script on "treasonous" Obama administration 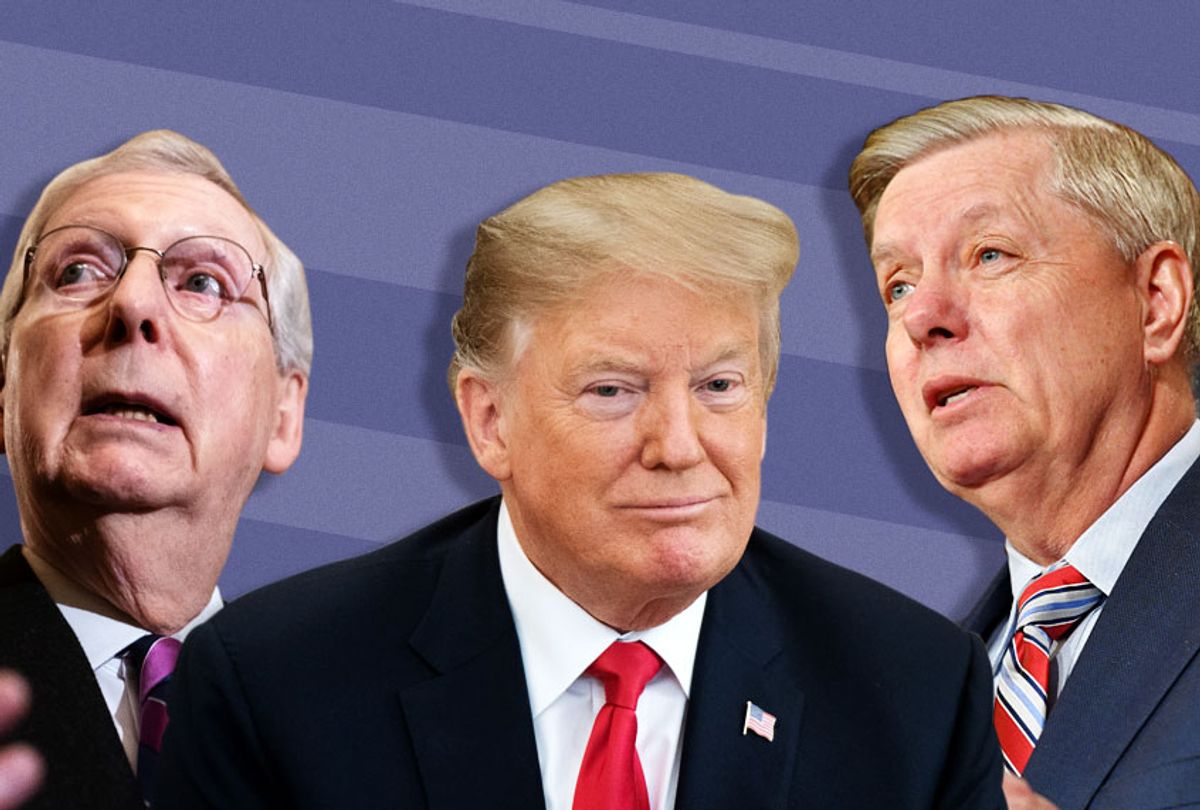 Too much has probably been written about Donald Trump's twisted psychology. It's clear he has many "issues." But while it's interesting to try to unravel what makes him tick, it may be more useful to consider his philosophy if one wants to figure out how to successfully oppose him. Many people assume that the Trump ur-text "The Art of the Deal" offers a window into Trump's worldview. But that book and the others that followed were ghostwritten to sound like something Trump would believe, not what he actually thinks.

It seems clear that Trump's philosophy of life is zero-sum primitive domination and not much else. And there is one credo in "The Art of the Deal" he does live by: "I fight when I feel I'm getting screwed, even if it's costly and difficult and highly risky." Over the years that's evolved into something a little bit more elemental. It's no longer about just fighting. It's about vengeance.

In 2012, Donald Trump gave a speech at Jerry Falwell's Liberty University. It seemed weird at the time because he was still considered a libertine gadfly who appeared on Howard Stern's show and bragged about his sexual exploits. It later turned out that he had given a substantial sum to the place so that explained the invitation. Since then, the younger Falwell has become one of Donald Trump's most ardent followers.

He shocked the Christian student body with this statement:

That may have been one of the more inappropriate venues, but Trump has said things like that in speeches for many years. Back in 2005, he told a Colorado audience, "If someone screws you, screw them back 10 times harder. At least they're going to leave you alone, and at least you'll feel good. I believe in screwing people when they screw you."

He had his ghostwriter spell it out in his 2009 sequel, "Think Big":

Trump has spent his life on the edge of being discovered as a fraud. Character assassination and revenge, or the threat of it anyway, is how he dances his way out of trouble. It's like a magician's misdirection, done with the impact of shock and awe. Whether it's siccing his lawyers on people he believes have wronged him, siccing his "fixer" on reporters who write things he doesn't like, or publicly humiliating a subordinate he feels has disrespected him, this is how Trump believes he has become the most powerful man on earth.

When a politician sees some daylight after having been under a cloud for a long time, the usual response is to tell the country that it's time to pull together and get back to doing the work they were sent to Washington to do. They don't want to wallow in the scandal because all it does is remind people it was there. They want to be positive and optimistic and put the whole thing behind them. Not Donald Trump.

Considering his "get even" credo, it should no surprise that in the wake of Bill Barr's letter to Congress, which Trump erroneously says totally exonerated him, the president's first move was to declare his accusers of treason and demand they be investigated.

There are a lot of people out there who have done very, very evil things, very bad things, I would say treasonous things against our country. And hopefully people that have done such harm to our country -- we've gone through a period of really bad things happening -- those people will certainly be looked at. I have been looking at them for a long time, and I'm saying, why haven't they been looked at? They lied to Congress. Many of them, you know who they are. They've done so many evil things. I will tell you, I love this country. I love this country as much as I can love anything. My family, my country, my God. But what they did, it was a false narrative, it was a terrible thing. We can never let this happen to another president again. I can tell you that -- I say it very strongly. Very few people I know could have handled it. We can never, ever let this happen to another president again.

By "never let it happen again," he is saying, "get even so they'll never mess with you again." By "evil people," he of course means the Obama administration.

It's tempting to say that this is just Trump being Trump, but his family and his henchmen in the Congress are taking him seriously and they are running with it.

Senate Judiciary Committee chair Lindsey Graham, R-S.C., has already promised to investigate the Clinton email case all over again. (The New York Post is demanding it.) Now Graham is calling for a special counsel to investigate the Russia investigation.

Trump's most loyal henchmen in the House are also on it:

Trump's personal lawyer, Rudy Giuliani, wants to know "who paid for it":

And to no one's surprise, the president's family is with him as well:

House Minority Leader Kevin McCarthy has demanded the resignation of House Intelligence Committee chair Adam Schiff, D-Calif., for saying there was plenty of evidence of collusion. (There is, of course. Whether it fell under the special counsel's definition of conspiracy and coordination is another question.)

The New York Times reported that Republican strategists "share the president’s grievances, including the suggestion that anyone involved in the Russia investigation’s origins had engaged in treasonous behavior," and are now hoping for investigations.

This isn't just the president sounding off. So far, the Democrats don't seem to be too spooked by the Republican threats. They are too busy fending off the high-velocity spin about the Barr letter that Salon's Amanda Marcotte aptly compares to the Iraq WMD propaganda. But the mere fact that the president and high-ranking members of Congress are pushing this ugly idea of wreaking vengeance should sharpen the Democrats' own survival instincts and allay any inclination to ease off on oversight. They cannot allow the country to be held hostage by this authoritarian "lock her up" mentality.