Here's what we still don't know about Donald Trump's links to Russia: Virtually everything 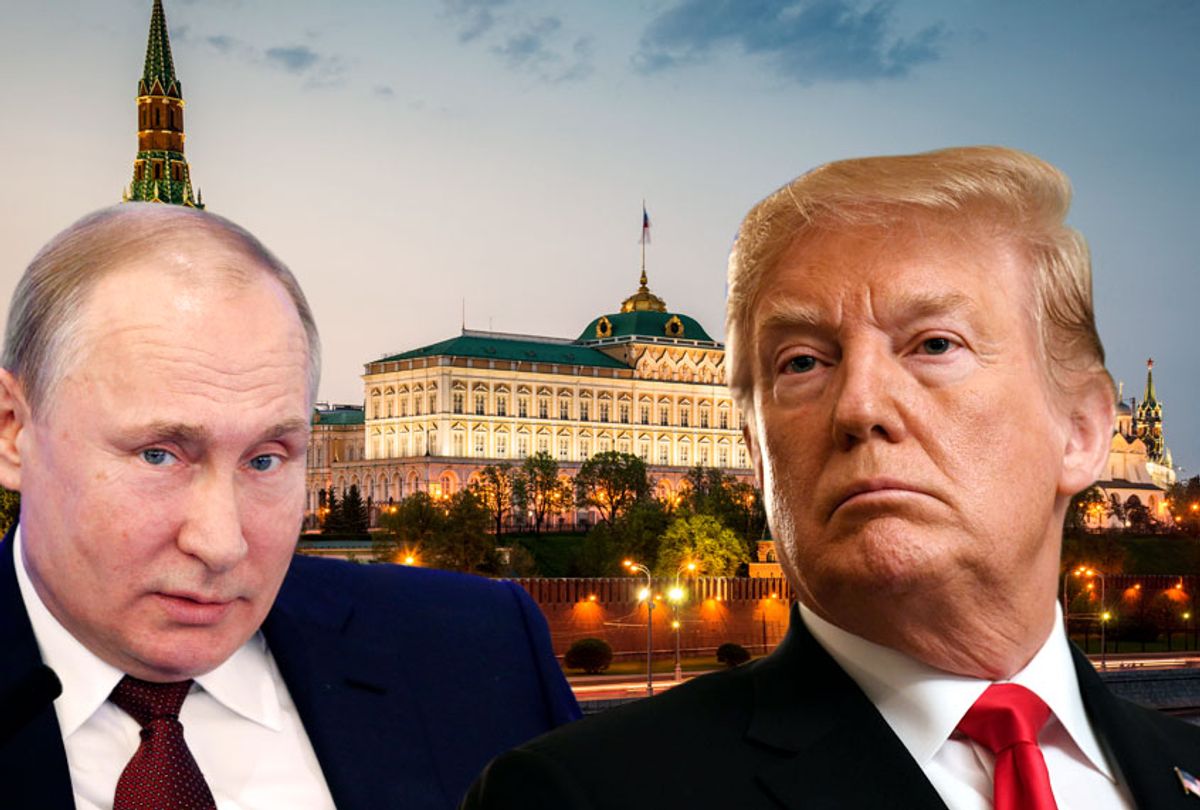 One of the many advantages Donald Trump enjoys in terms of mitigating the impact of his myriad political scandals is the sheer number of them. This prevents most Americans from keeping track as they whiz past, like a tennis ball machine powered by cocaine. Despite the release of William Barr's letter, there are dozens of crimes to be investigated or under investigation now, on top of Trump’s abuses of power and other trespasses. I personally follow this stuff for at least 12 hours a day, and the only way I can keep track is by taking notes and having innumerable tabs open in my browser window. And I still miss a few as they go by.

Robert Mueller’s investigation alone featured more layers than Steve Bannon’s menswear -- one of many reasons why Barr’s four-page summary, hastily dashed together in a weekend, condensing two years and perhaps hundreds of pages of crucial details into fewer words than this article, is both a suspicious and infuriating oversimplification of an extremely complicated thing.

Not only is the scope of the investigation nearly impossible to follow under normal and transparent circumstances, but adding to its complexity is the appearance of a cover-up, in which Barr is deliberately leaving out what could be catastrophic evidence about Trump’s actions before and after the election.

As of this writing, we haven’t seen the Mueller's actual report save for a few sentences, and I don’t expect we will anytime soon due to continued chicanery -- you know, because Trump is so innocent. But what we know is that Mueller and his team were, among other prongs, engaged in a counterintelligence investigation of Trump, handed off to them by the FBI.

Specifically, the Mueller report may contain evidence, or perhaps an assessment, as to whether the president of the United States is compromised by both the Russian government and its oligarchy due to his decades-long business relationships in Russia, as well as by the existence of a quid pro quo arrangement with Russia, whether via the oligarchs, the Kremlin or a cocktail of both.

These are the possible terms of the quid pro quo potentially outlined in the Mueller report: Trump’s team offered to lift U.S. sanctions against Russia in exchange for Vladimir Putin’s cooperation with the plans to build a Trump Tower in Moscow (aka the "Moscow project"). Sure, the project was shelved in the summer of 2016, but there’s nothing to say it won’t be unboxed again when and if Trump leaves office, making continued cooperation necessary. Furthermore, the fact that Trump lied to Republican primary voters about his Russian dealings rendered him susceptible to blackmail, forcing him closer to Putin whether or not he wants to be.

In terms of Trump’s business links to the Kremlin, there’s the aforementioned Moscow project, in which Putin himself would (according to some reports) have been gifted the $50 million penthouse. There’s Trump’s sale of his moldy Palm Beach property at a massive profit to Russian oligarch Dmitry Rybolovlev. There’s also Trump’s Miss Universe pageant in 2013. There’s the Trump Organization’s linkage to Alfa-Bank, with reports emerging about network server communications between Alfa-Bank and Trump Tower in Manhattan. There’s the mixed martial artist Fedor Emelianenko, a former business partner of Trump’s and personal friend to Putin. We also have Trump’s pal Aras Agalarov, the Azerbaijani billionaire, and his son Emin Agalarov, the pop star. There’s also Felix Sater, the Russian-born businessman with links to the organized crime, an impressively shady history and his partnership in the Bayrock Group, which had offices just below Donald Trump’s in the Manhattan Trump Tower. There’s Donald Trump Jr.’s speaking engagement with Fabian Baussart, who nominated Putin for a Nobel Peace Prize. And there’s also Don Jr.’s 2008 remark: "In terms of high-end product influx into the U.S., Russians make up a pretty disproportionate cross-section of a lot of our assets.”

Nothing in the Barr memo even hinted at any mention these relationships or how they might have compromised Trump’s ability to act with America’s -- not Russia’s -- best interests in mind.

To be clear: This aspect of the special counsel’s purview, which was absent from the Barr memo, is a colossal deal. It speaks to the president’s loyalty to the United States and our Constitution; whether or not he is operating in support of Russian interests and his own business dealings rather than the welfare of our own country. It’s also one of the more obvious dangers of the Trump presidency. We’ve all seen him kissing up to Putin, lifting sanctions and whatever the hell that was in Helsinki. Why?

If Trump is compromised or pursuing a quid pro quo, it would go a long way toward explaining why he continues to take the side of Vladimir Putin over his own intelligence community, why he’s constantly scrambling to defend Putin, why he’s lifting or failing to implement retaliatory sanctions against Russia, and especially why 17 Trump campaign officials took more than 100 secret meetings with Russians, and then either lied about those meetings or failed to disclose them or both. Why? Another question without an official answer from Trump or the Justice Department.

Conversely, the Barr memo quoted the Mueller report indicating that Trump and his underlings didn’t assist Russia’s attack on the election. That’s not necessarily the same as whether there was a quid pro quo arrangement and compromising information -- kompromat -- used to coerce Trump into compliance, a classic Russian intelligence tactic dating back to Putin’s KGB days.

Indeed, it’s this counterintelligence investigation that many of us have mentally blended with “collusion,” probably because in the context of both areas -- collusion or the quid pro quo -- Trump and his people appear unusually cozy with Russian operatives. Call it the “other collusion.” Either way, there’s been zero information presented by Barr or Mueller debunking or disproving the existence of shady dealings between Trump and Russia that could speak to Trump’s patriotism and his loyalty to America. The “other collusion” is still very much unresolved and on the table. Sorry, Trumpers.

Additionally, as with obstruction of justice -- which, despite the evidence, was left up to Barr to unilaterally adjudicate -- Mueller’s report could outline his findings about the counterintelligence probe, meaning the possible quid pro quo and Trump’s behavior in service of that, while stopping short of recommending criminal charges. It’s also possible Mueller didn’t find anything definitive. We just don’t know, because we haven't seen it.

In the wake of the Barr memo, all we know at this point is that the FBI is supposed to brief the congressional “Gang of Eight” this week about the status of the counterintelligence probe. That’s it. Beyond that news, we can only base our personal conclusions on what we’ve observed so far, both via the press and through Trump’s inexplicably Putin-friendly public behavior.

Consider this: If the Mueller report cleared Trump of wrongdoing along these lines, it’s likely Barr would have included that information in his memo. Its absence indicates two possibilities: The report’s findings are damaging to Trump or the investigation itself is still being conducted by the FBI.

All told, there’s a hell of a lot we don’t know. So it’s our responsibility to keep asking questions while demanding to see the Mueller report immediately. Yet with every passing hour, the possibility of a cover-up grows: omissions, edits and redactions, effectively burying the truth as well as information that might not cross the indictment threshold but might, perhaps, cross the impeachment threshold -- the patriotism threshold. In fact, we have just learned that Barr will hand off the report to the White House before the public sees it, potentially allowing Trump’s team to redact or remove entire sections beneath the umbrella of executive privilege. Imagine the explosive reaction of the Red Hats if Loretta Lynch had done the same with the Benghazi or Hillary Clinton conclusions.

As we’ve all experienced this week, Trump’s flooding of the zone can breed frustration, disillusionment and blinding distractions, encouraging us to give up. Trump’s tennis ball machine seeks to prevent us from knowing the truth, and especially from holding the president and his men accountable for their growing roster of crimes.

Irrespective of Trump’s “mission accomplished” declarations this week, the Russia story is far from over. One of our primary duties as citizens is to guard our nation against foreign influence at the highest levels of the federal government, and in that regard our citizenship is being tested in ways it never has before. We’re being tested to see whether we can keep up with Trump’s malfeasance as it rockets past our faces, while the president himself continues to appease a hostile foreign power in plain sight and at America’s expense. The answer to that challenge isn’t a matter of whether we can do it. We have no choice, we must do it.