I didn't teach my kids how to cook. Did I fail them?

I vowed to be the diligent mom with the kitchen-savvy offspring, but I went the Kraft mac & cheese route instead 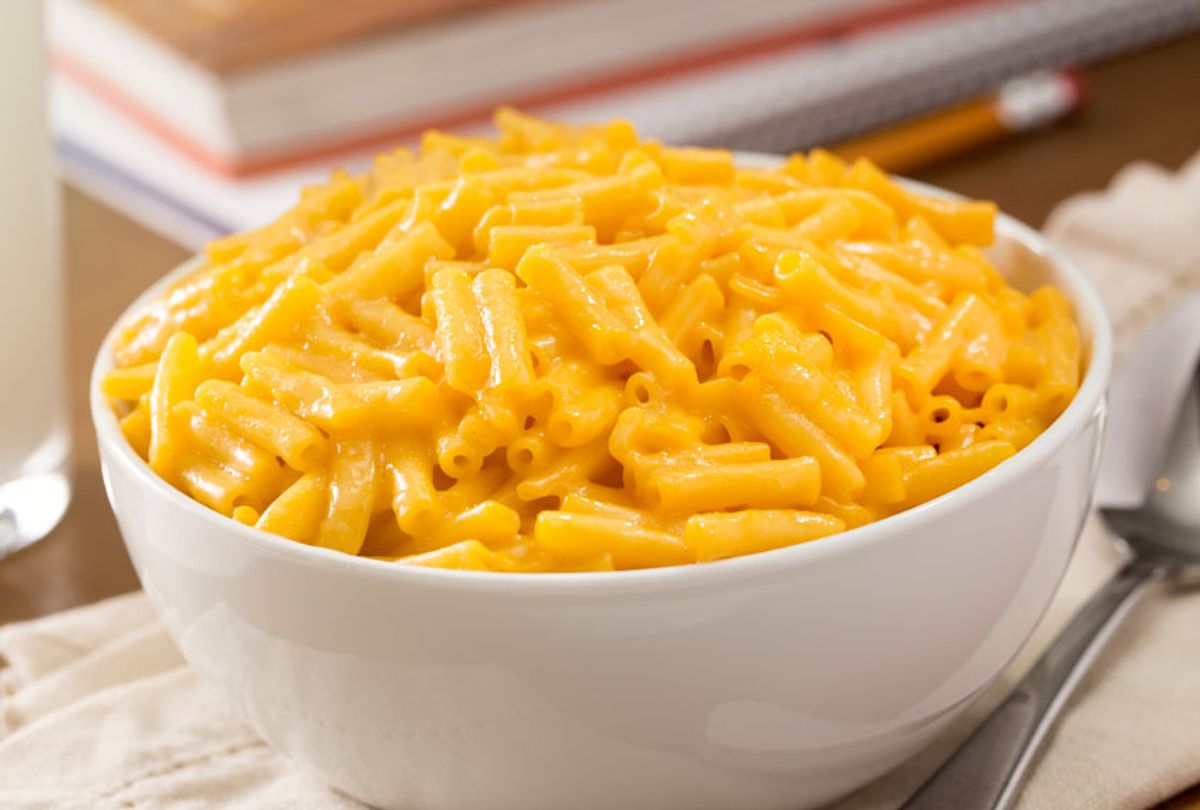 I have a photograph of my firstborn, aged four. She is sitting on the kitchen floor of our old apartment, wearing a child-sized toque and apron, surrounded by bowls and utensils. She is beaming brightly. I treasure that image. I treasure it because it is adorable, and because it is the last documented occasion of my now 19-year-old daughter holding a whisk.

Like every parent I know, I went into child-rearing filled with all the confident hubris of the uninitiated. My kids would not dine on chicken nuggets and crustless sandwiches. They would not — as my spouse had — receive their own special meals of hot dogs and fries while the rest of the family ate "regular" food. Nor would they grow up, as I did, in a home largely indifferent to cooking and dining, approaching food with all the bored obligation one usually reserves for nail clipping. No, my babies would have adventurous palates. They would precociously lisp their own sushi orders to the waiter and never confuse a kreplach for a pierogi. They would likewise be proficient cooks and bakers, having spent many fond childhood hours in their cramped but homey kitchen with their mother, learning to create the dishes she'd lovingly passed down.

I look back now and think, I was out of my goddamn mind.

At first, I tried to coax them with the gateway drug of dessert. I tied little aprons around my daughters' waists, preheated the oven and laid out the ingredients for cookies and simple cakes. I smiled gamely as they gnawed on sticks of butter and shoved their tiny fingers directly into bowls of batter. I cleaned up spilled bags of flour and bottles of oil. Corners of my old kitchen are likely still covered in a thin layer of accidental homemade paste.

I believe that my kids do have happy memories of blasting Beyoncé while they fought over who would measure the sugar. I believe that they cherish the thought of holding my hand as we strolled farmer's markets together, sniffing basil and thoughtfully examining peaches. I also know that their current affiliation with baking is strictly on a bowl-licking basis, that neither of them seems to know how to turn on the stove, and that when my elder child recently returned home for spring break, she requested her favorite meal — Kraft macaroni and cheese.

When, exactly, did I give up? Was it when the girls started begging off from our baking sessions, asking me to call them in only when the buttercream required tasting? Was it when the school years kicked in, and the demands of homework and softball and band recitals crowded out their time or inclination to learn how to roast a chicken? Was it when my younger child admitted she preferred the I Can't Believe It's Not Butter! from Grandma's house to the bowls of homemade stuff I whipped up weekly in our standing mixer? All I know is that I have, over the years, cajoled, encouraged and nagged my children to do many things, from writing thank you notes to practicing the saxophone, but I have failed to coerce them into picking up their socks and I cannot persuade them to go any deeper into our kitchen than the refrigerator door.

Other families seemed to have figured it out just fine. At various dinner parties, hosts' offspring would proudly serve side dishes of their making. Neighbors rushed to sign their kids up for "edible art" workshops. When they were in first grade, my daughter's classmate was named a Food & Wine "next generation star chef" for his beet risotto. This was around the time my other child announced that bacon was her favorite vegetable.

Maybe if I'd applied the same vigilance to training my little sous chefs that I did to dragging them to choir practice, at least one of my children would now be able to willingly and successfully chop a carrot. I could have barked orders at them while they labored in miniature Crocs until they mastered the art of a uniform dice, or even just remembered to use a cutting board.

Instead, I got lax. Maybe I just lowered the bar. Deep in the thick of parenting, any night I could get a decently cooked meal on the table and actually into my children's mouths felt like winning the Super Bowl. Why mess with a good thing by teaching them to them to prepare it? In the long run, you want to raise responsible adults. In the day to day, you just want them to do their homework and chew with their mouths closed. I always vowed my daughters would go out into the world with basic competency skills in cleaning, cooking and budgeting. So far I'm 0 for 3.

I just didn't want them to be like me. Growing up, I never learned to cook; my mother hadn't either. She was 36 when she remarried and prepared her first real dinner. It was . . . not great. It wasn't surprising then that I spent my early adulthood going from dorm food to frozen dinners and Cup Noodles. I lived for three years in my first apartment and never once lit the stovetop for so much as a cup of tea. My refrigerator contained only beer.

Then I moved with my fiancé, a man who dazzled me with his fried pork chops and his spaghetti with Hunt's tomato sauce. I felt like I'd hitched my wagon to Wolfgang Puck. And fearing that I might not be able to hold on to him indefinitely with my charm alone, I called a friend who worked at Williams-Sonoma for help. She gave me a copy of "The Silver Palate Cookbook" and recommended the sesame noodles. I've been cooking ever since.

No one was more shocked than I when it turned out I had a natural aptitude for cooking. The only thing more surprising was when I learned, on the occasion of my child's first birthday, that I could also bake. It turns out that to be near the oven, a glass of wine in my hand and a podcast about serial killers on iTunes, is my happiest place on earth. If you'd told me that when I was young and considered a martini and a purloined dish of olives from the end of a bar a legitimate meal, I'd have begged to differ. So perhaps in addition to just wanting to arm my children with some useful abilities, I hoped to spare them the years I missed out on doing something that has proven one of the great joys and solaces of my life. Last night my daughter called from college, en route to the ice cream parlor where she was going to have dinner. So I don't think we're there yet.

I hope that somewhere along the way, my kids have at least picked up fond associations with home and with food. I've done my best to shield them from the dysfunctional attitudes and anxiety that seem to be an expected part of performing the role of femaleness in our culture. Our meals have always been, if imperfect, generally assumed to be pleasurable, nourishing and social. If for them that means microwaved soup or a banana right now, that's not the worst thing that could happen. Or maybe they're just more like me than I've thought. A few weeks ago, my daughter texted me a photo of her with her roommates. They were in the dormitory kitchen. Making a meal of pasta and garlic bread. There was no apron, no whisk in her hand, but she was smiling like she was right at home there.

We are not a family of prodigies, whipping up prize-winning risottos from the nursery. We are not anybody else's eager students of the culinary arts and we all find the word "foodie" irritating. Maybe, however, we somehow find our way into the kitchen eventually anyway, in our own time and on our own terms. And we pick up the whisk when we're damn good and ready to use it.