The undeniable fun of chile con queso, before & after my parents' divorce

On life and Velveeta 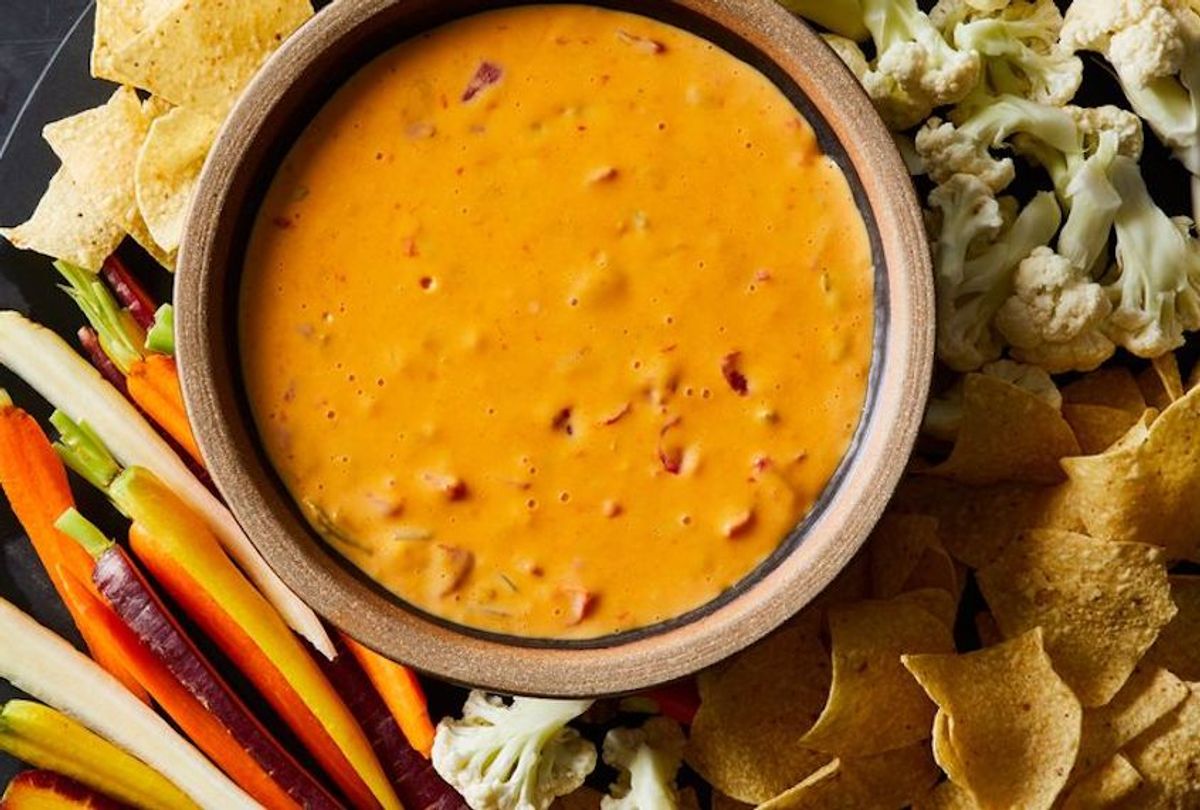 The silver foil brick was an aberrant addition to our Tom Thumb shopping cart. Velveeta’s bright orange look-at-me packaging, designed to send children into an ecstatic frenzy — much like the Friday night arrival of Mr. Gatti’s and Domino’s pizza boxes, two-liter bottles of Coke, or if we were extremely lucky, a six-pack of I.B.C. Root Beer — signified something special in our house. When my mother dropped Velveeta and a can of Ro-tel into the shopping cart, it was time to kick up our heels.

Picture Dallas in the oil boom mid '80s, the last hurrah before anyone knew it, everything Lone Star State–sized for one last time. The McColl residence is throwing a party:

Fur coats are hung in the hall closet; their owners wear big clip-on earrings and even bigger shoulder pads as they stand at the marble wet bar beside men with equally big, booming voices. The little boys break-in stiff penny loafers and shift in their blue sports coats; the girls have bows tied in their hair and tat the back of their dresses. Patent leather shoes squeak and formal underskirts itch. High on sugar and dreams, kids run down the hallways with fistfuls of candy canes and pose for photographs with our freckled cocker spaniel who wears a red velvet ribbon tied at her neck in a thick bow. There are platters of ice-cold shrimp cocktail the color of coral reef, stiff drinks in cut-crystal rocks glasses, and the quintessential Texas touch: chile con queso in a silver-plated chafing dish.

My mother was not a native speaker of this cultural language. She had arrived in Dallas as a young wife by way of a Massachusetts dairy farm and learned the playbook of hospitality on the pages of Southern Living—how to fry chicken, how to dust okra with cornmeal, how to mix punch with a kick that sneaks up like a flirt under the mistletoe. The teenager who sewed her own skirts with babysitting money grew into a woman with no schooling, and little interest, in Southern glamour or gentility. (One summer, she dressed all four of her kids in homemade head-to-toe tie-dye.) She wasn’t a hippie, but she was frugal, and the box of Velveeta cost as much as a whole fryer. But when it came time to throw a party, she did it by the Junior League–approved book.

Chile con queso, Texas' sixth food group, did the heavy-lifting for her. As far as crowd-pleasing party food goes, it is a sure thing: dead-easy, consistent, and good. A recipe for the dip in all its processed cheese glory was first published by the Woman’s Club of San Antonio, writes "Queso!" author Lisa Fain. After that, the recipe frequently appeared in Texas Junior League cookbooks, and First Lady Lady Bird shared her recipe with The Washington Post in 1964. Julia Child, sampling her first queso in Dallas, reportedly asked for thirds.

If a humble, down-home dish was celebrated by the grande dame of French cooking, women’s social clubs and, even, the White House, surely this party dip could cross cultural divides for my mother, too. She was a stranger in a strange land, attempting fluency in a language of laborious fried dishes and hot rollers, while she stumbled over subtleties about sororities and summer sleepaway camps. So here was a revelation — one can of Ro-tel tomatoes and a brick of Velveeta — easy-to-understand shorthand that meant instant party success.

Crashes follow booms. We had a stereo with speakers the size of my Barbie Dream House, and I remember Willie Nelson’s plaintive timbre filling the house as my dad carried me up the carpeted staircase to bed, softly singing “The Party’s Over” at the shell of my ear. And it was. The denouement of the early '90s recession was signed divorce papers. Our family was broken, but we were also broke.

The house went up for sale, and at the realtor’s request, the framed family pictures of kids in the bathtub came off the walls, were stacked in boxes, and found a new home on the garage floor. Not even our dog could bear the disbanding; when the movers left the front door wide open, she fled. I watched from the high limbs of the front-lawn magnolia, as my mother’s friend pulled up in a silver Cadillac to deliver groceries to our rental house. Our old dining table was too large for our new dining room. We were too big and too many for the new house. There were no parties—actually, one: a Caesar’s Pizza front-yard picnic followed by a "League of Their Own" slumber party. The silver-plated chafing dish likely found its own new home beside my mother’s engagement ring in a pawnshop downtown. Chile con queso does not make regular appearances on the menu of a family in crisis.

It wasn’t until years later, when our mother fell in love again and moved us north of the Mason-Dixon, that our taste for Tex-Mex returned. Our family had settled into a new form just as my mother discovered a grocery store that carried Ro-Tel. The timing was right.

Chile con queso is, at its heart, a party food. When it appears at a tailgate, a block party, in a Crock-Pot, or at the center of the Tex-Mex restaurant table, it carries with it a dictum: You are about to have fun. We were ready; in fact, we were overdue.

We began to celebrate Tex-Mex again. In its new incarnation, our party shed the ceremony it once stood on, peeling away layers of politesse like an onion, until we reached its vital, green center. My new niece wore the itchy party dress, cried, removed it, and, naked, was happy again. I salted the rims of the margarita glasses, my sister mashed the avocados, my little brother played guitar while my step-brother harmonized, and our older brother leaned back in his chair, eating more than his fair share of the guac. We had to shout over the whirring of the blender. The guacamole needs more lemon!

When the cubes of orange cheese had melted, we ate the chile con queso straight from its aluminum double-boiler, not even giving our mom a chance to decant it to a serving dish as we hovered over the stove dipping in snowy cauliflower florets and tortilla chips. The night was loud, left us with a sink full of dishes, and was our new favorite family tradition by far.

Our queso tradition has spilled into other months. This year, I cooked a Tex-Mex fiesta, complete with chile con queso, to celebrate my little brother’s no-longer-so-little birthday. This is an upshot to the predictable trials that families slog through together, again and again. On the other side of a crisis, normal life can offer no shortage of causes for celebration. It requires surprisingly little to get the party started at any time of year: a kitchen, somewhere, a guitar, maybe; one can of Ro-tel tomatoes, a brick of Velveeta.