Trump's message of incitement against the press is ringing through, loud and clear 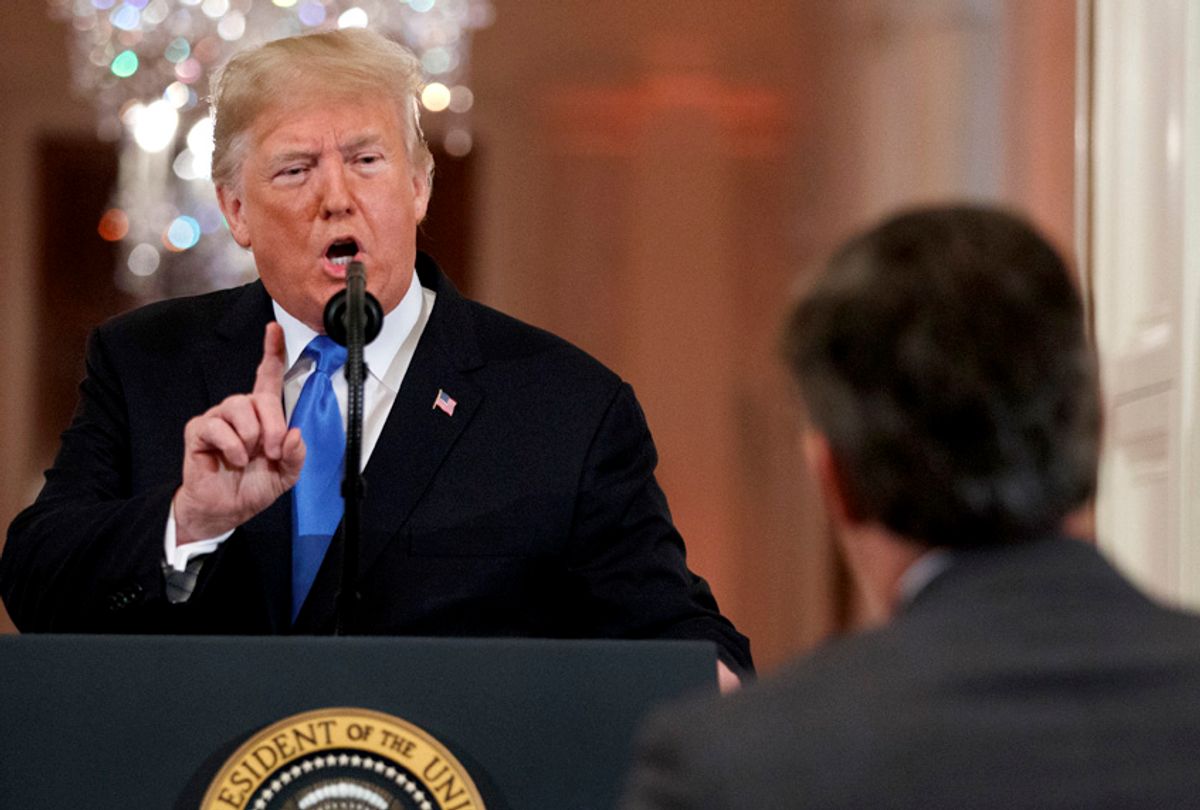 On March 21, Cesar Sayoc pleaded guilty after mailing explosive devices to the offices of CNN, several Democratic officials, and other progressive leaders. Sayoc, a superfan of President Donald Trump whose van was plastered with anti-media images, was arrested while reportedly working through a list of more than 100 potential targets, including other journalists.

One week later, at a rally in Grand Rapids, MI, the president accused the media of working with Democrats and the “deep state” intelligence community in a “sinister effort… to sabotage the will of the American people” by reporting on connections between his campaign and Russia during the 2016 presidential election. Trump further claimed that “all of the Democrat politicians, the media bosses, bad people, ... crooked journalists, the totally dishonest TV pundits” who had promoted the Trump-Russia “hoax … have to be accountable.”

The crowd responded by chanting, “Lock them up!”

Trump’s campaign of incitement against the press will never stop. The president has received repeatedwarnings that his actions threaten the safety of journalists in the United States and around the world. He does not care — or at least, he does not care enough to change his behavior. His political strategy of delegitimizing any individual or institution that pushes back against his lies and his personal need to respond to any perceived grievance with maximum force both require him to attack the press. And so those attacks will continue, no matter the consequences.

Over the last week, he has returned to his Stalinist description of journalists as “the Enemy of the People,” baselessly suggesting that they fabricated sources as part of a campaign of deception to take down his presidency, and in so doing damaged the country. In the hours before Trump’s rally on Thursday, The Atlantic reported that the Republican National Committee and the pro-Trump super PAC America First are planning to respond to critical journalism by assailing individual reporters using digital ads.

At a minimum, this behavior inevitably intensifies the constant stream of harassment and threats which journalists have been subjected to since Trump’s political rise began.

At worst, it puts reporters in physical danger.

Trump’s vicious attacks on the press during his campaign rallies have had violent consequences — a BBC cameraman was assaulted while simply doing his job and filming one last month. And law enforcement has stepped in to prevent even more dire repercussions. At least two people were arrested last year after allegedly threatening to murder reporters in messages that mimicked the president’s rhetoric; in September, the director of the FBI reportedly said that six federal investigations were then underway into threats on journalists.

Sayoc isn’t even the only person to allegedly assemble a hit list of journalists. In February, the FBI arrested Christopher Hasson, a Coast Guard officer and self-described white nationalist whom prosecutors termed a “domestic terrorist.” Hasson, who faces federal charges of illegal possession of a firearm and possession of a controlled substance, had amassed an arsenal he allegedly planned to use to murder hosts at CNN and MSNBC and Democratic politicians.

Asked at the time if the president planned to ratchet down his rhetoric in response to Hasson’s arrest, White House press secretary Sarah Huckabee Sanders lied, claiming Trump hasn't "at any point” done anything “but condemn violence, against journalists or anyone else." Her claim was simply fantastical given Trump’s public encouragement of supporters who harass — and even assault — members of the press.

The president’s words on the stump matter much more than the mealy-mouthed statements coming out of Sanders’ office. And his message of incitement against the press is ringing through, loud and clear.