“Most of the money that pours in after [disasters] does not reach organizations on the ground," one observer noted 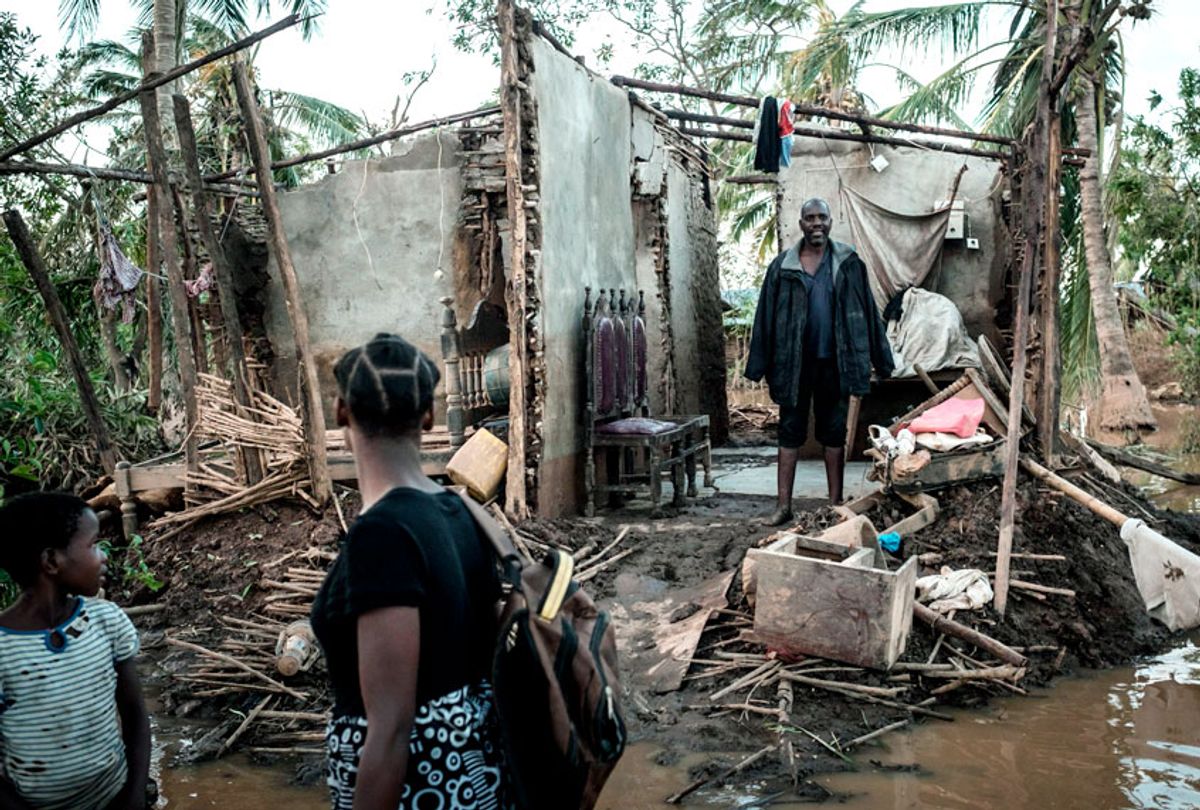 Joaninha Manuel, 9, and her sister Rosita Moises Zacarias, 15, look at their father Francisco Simon in their house destroyed by the cyclone Idai as they go to seep in a shelter in Buzi, Mozambique, on March 22, 2019. (Getty/Yasuyoshi Chiba)
--

The cyclone that hit Southeastern Africa in mid-March and devastated regions of Mozambique, Malawi, and Zimbabwe has taken at least 700 lives, left hundreds of thousands in need, and has escalated into an even bigger humanitarian crisis due to waterborne and infectious diseases. It’s been described by the UN as possibly the worst ever disaster to strike the southern hemisphere.

Yet Cyclone Idai and the havoc and suffering it has created has received less attention in the media than other terrible, but less catastrophic, natural disasters. This almost certainly means less giving will go to help those affected than would have been the case if this crisis received the attention that, in my view, it deserves. Indeed, one nonprofit leader I know involved in disaster relief globally told me matter-of-factly that there is “not much donor interest” in this event. I can’t imagine that would have been the case if a major natural disaster of this order had occurred in, say, Europe or Canada.

But, sadly, such is the nature of disaster-related philanthropy, which is largely driven by media attention, which of course is affected by whatever biases – implicit or otherwise – the media may hold.

This is the first of four big mistakes donors make when disaster strikes and they feel compelled to help alleviate the enormous suffering. They are overly responsive to what’s on the front page, or what leads the cable news broadcasts, rather than seeking to understand the relative scale of a disaster they hear about for themselves. The relationship between the attention something gets and the degree of suffering is not a linear one, and so donors need to be smart and do their research.

A second mistake is that, even when a disaster gets the attention it deserves, people often don’t give to the organizations in the best position to respond. People often default to giving to whoever is asking, or to whomever has the big, recognizable brand name, like the American Red Cross.

That’s what Ben Smilowitz did when Hurricane Katrina hit in 2005. Smilowitz was a recent college graduate, in between jobs, with a background in campaign organizing and youth civic engagement. He didn’t have money to contribute, but he figured he could put his organizing skills to work as a volunteer helping with response to the hurricane.

The Red Cross deployed him to Mississippi and, within hours, he was appalled by what he saw. Efforts to help were disorganized, and people were being turned away based on what Smilowitz believed were nothing more than prejudices. He has since learned that what he saw is all too typical in disaster response.

“Groups that actually have the capacity on the ground to respond” aren’t the ones getting donations, Smilowitz explained to me. Instead, it’s the brand-name organizations that may have a high profile that get the support, but don’t have the community knowledge and contacts to be effective.

“Most of the money that pours in after these events does not reach the local organizations on the ground,” he said. But it’s often these organizations that understand the needs best and are therefore best positioned to help.

Smilowitz has set out to change that, founding the Disaster Accountability Project. It’s a watchdog organization and has, for example, taken the Red Cross to the carpet for shortcomings in its 2013 response to Hurricane Sandy. They also launched the SmartResponse website, which helps givers find organizations that are well-positioned to help in the wake of a disaster – organizations that are driven by those closest to the challenges and those with roots in the affected communities.

SmartReponse actively seeks out information from organizations in the US and around the world and curates “how to help” lists so that, when disaster strikes, givers can quickly find local organizations to support. Smilowitz is just getting started, and needs more support to realize his vision – I couldn’t find anything helpful on the site related to the Cyclone Idai disaster as I wrote this – but his effort has the potential to transform post-disaster giving. We need to do better at connecting those who want to give with those best positioned to make good use of those resources. (The most helpful lists and articles I found related to Idai include this one from the PBS site and this one from the New York Times,  both of which include local organizations with deep roots in the affected regions. A number of other local efforts to help have taken root since.)

It’s not always wrong to support big national or international organizations. I’d argue that the Red Cross frequently does crucial work responding to disaster. But it shouldn’t necessarilybe the default, either.

The third mistake is that, too often, people don’t give what is actually needed. It’s crucial that givers listen to local organizations in affected communities. Days after Hurricane Harvey hit in 2017, a colleague I will call Nancy, an executive at a foundation in Houston, found herself on the phone with a wealthy individual donor in New York. She told the donor what was needed, but the donor had her own ideas.

“It was ridiculous,” Nancy vented. “There was an outpouring of generosity from all around the city and around the world. Much of that giving did tremendous good. But much of it went to waste. People donated box after box of clothes, but that’s not what was needed! My daughter was volunteering at a nonprofit that literally threw out donations that weren’t needed, including a pair of donated stiletto heels. Stiletto heels? Seriously?”

We all want to help. But we need to make sure we’re doing so in a way that’s responsive to the real needs of those affected. This relates to a fourth mistake that’s frequently made in responding to disasters: prioritizing short-term relief over either preparedness or long-term rebuilding.

Bob Ottenhoff runs the Center for Disaster Philanthropy, which seeks to change this in part by establishing funds to which individuals and institutions can contribute. These funds take the long view, granting dollars out for rebuilding over time, as needs become clearer.

“Seventy-five percent of all disaster giving is for immediate relief,” Ottenhoff explained, noting that it mostly happens in the thirty days after an event. “When the media coverage ends, so does the giving.” Frequently, too much is raised for immediate relief, he noted, and too little for the intermediate and long term. Wise donors will look to support these efforts, and the Center for Disaster Philanthropy can be a resource to them.

The instinct to help those affected by natural disaster is one we all feel, but we’ll be more effective if we avoid making these common mistakes. Try to direct giving to where the need is, not the media coverage. Seek out organizations with local roots, who are often best-positioned to respond. Provide what is needed – and that’s usually not your old stilettos. And take the long view and support rebuilding, not just immediate relief.

Approach disaster giving in this way, and your generosity and resources can really help those in their most desperate moments.