On learning to take risks and burn sugar 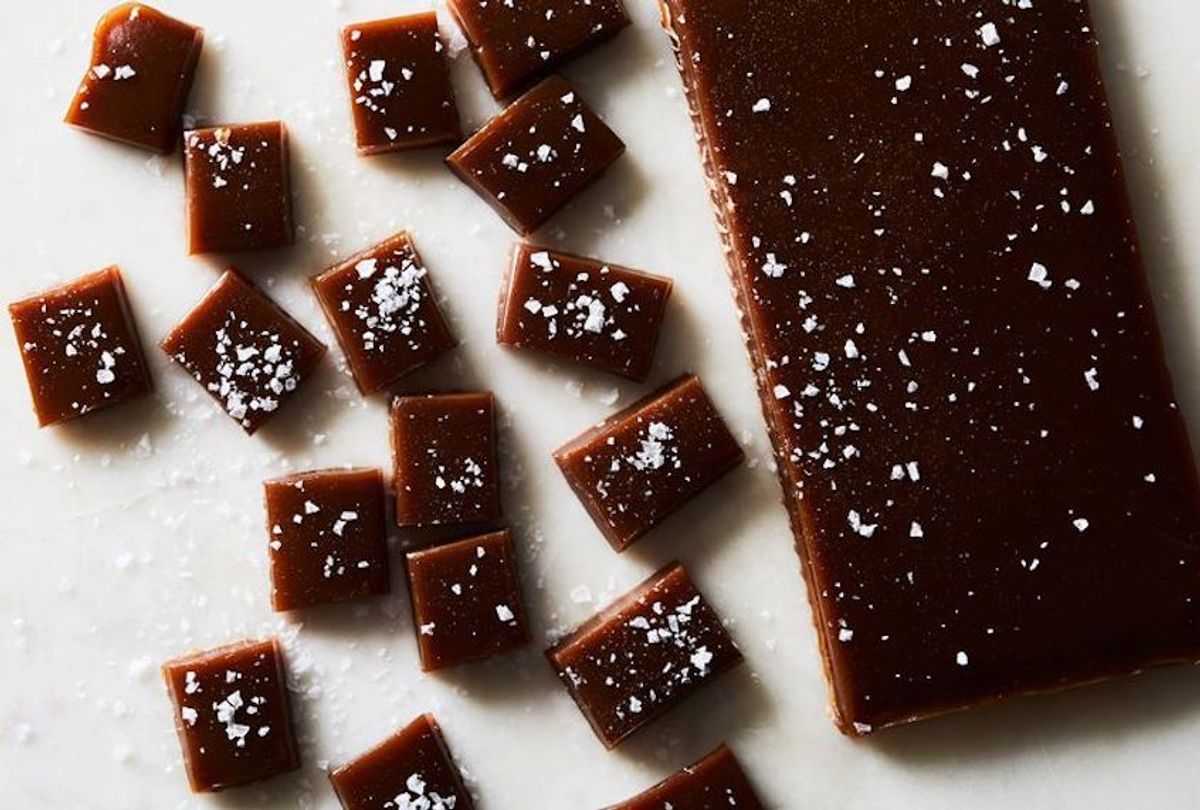 I watched from my step stool as my mother fearlessly stirred the bubbling sugar. It was time to pour the cream in — this part always scared me. The mixture ascended into a golden smolder as the cold cream hit the hot sugar. I watched nervously as my mother tamed the cauldron with a wooden spoon. I was wearing my Batman pajamas, a uniform she insisted on after one too many sugar-stained shirts. I sat in awe as the sugar transformed into liquid amber and the occasional puff of smoke wafted into the air.

“This is how you know it’s done cooking,” my mother told me as the distinct scent of burnt sugar perfumed the kitchen. “The darker the color, the deeper the flavor.”

She poured the caramel into a buttered pan and handed me the sugar-coated spoon. It was hot, but even at 7 years old, I knew better than to lick it right away — this was not my first time making caramels with her.

My mother ran a small caramel business out of our home. But these weren't some run-of-the-mill confection you get at the grocery store. Her caramels were so good, they became a sensation within our small town. She first began selling them as a way to earn money while taking care of my sister and me. Word of mouth traveled fast; she traded them for haircuts, babysitters, and other necessities. Her caramels were in such high demand that they soon turned into a viable way for her to earn an income while staying home and taking care of two kids.

I soon became my mother’s right hand in the kitchen — playing sous-chef as I helped her make large batches of caramels to fulfill orders. I loved working beside her as she grew her humble business into a local phenomenon. It quickly became our way of bonding, just us. I started out wrapping the candies individually, stuffing them into clear plastic bags adorned with golden ribbons, then cutting them into squares. During the busy season, I'd stay up far past my bedtime listening to The Talking Heads as we completed the orders for the next day. I loved pretending that I was a pastry chef; it made me proud knowing I could help my mother and make her life easier. Eventually I was promoted to designated pot stirrer. Taming the hot sugar made me feel like a grown-up, my mother’s caramel recipe a veritable document of my childhood.

After years of developing her original recipe, my mother learned about fleur de sel: the flaky sea salt that fancy restaurant chefs were starting to garnish their desserts with at the time. She ordered some online (this was before you could easily find it in grocery stores) and showered it on top of her confection. The result was a revelation. The salt brought out the flavors of the caramel and helped balance the sweetness—and being the savvy businesswoman my mother was, she started to charge more for them. People didn’t mind the price increase; the demand for them only grew. Long story short, she was salting her caramel long before it became standard practice for candy makers, and the radical idea reignited my small town’s obsession with her creation.

Now, 20 years later, my mother’s revelation got me wondering: If a touch of salt can take something that’s already perfect and make it even better, what would a touch of acid do to caramels? After all, chefs always toot the benefits of adding both salt and acid to food, so adding a touch of vinegar to my mother’s caramels should make them better, right? I decided to test out my theory.

Before heading down this uncharted territory, I needed to call my mother first. I mean, who was I to mess with perfection? To be fair, my knowledge of caramel-making up to that point was completely tribal, learned from a step stool and never from a written recipe. I knew that the first step of making caramel was to melt the sugar, but how much sugar was beyond me. I needed direction. I needed my mother. So I called her.

As a self-proclaimed “caramel traditionalist,” my mother was pretty wary of my idea. “Why would you put vinegar in my caramel recipe?” she asked. “That sounds weird.” But after some convincing, I managed to sway her—and explained that I wanted to see if it would make a difference — just like her flaky sea salt did years ago. She told me everything I needed to know, walking me through every step of her caramel-making process, and gave me a few pointers to keep in mind as I developed the recipe:

1. Don’t bother making caramels without owning a proper candy thermometer. “To do so without one would be a complete gamble,” according to my mother. Five degrees can completely change the texture of your caramels, so keep a close eye on the thermometer and stick to the recipe precisely.

2. Agitation promotes crystallization, so resist the urge to stir your caramel. One too many stirs and it could turn into one big crystalized mess.

3. Keep a pastry brush and a bowl of water handy to melt any sugar buildup stuck to the sides of your pot. Letting it build up can increase the chances of your caramel crystalizing.

4. Line your tin with parchment paper (never wax paper!) and coat it in a generous amount of oil. Wax paper will melt and stick to your caramels.

5. Garnish the tops of your caramels with sea salt after they set— doing so while they are wet will cause the salt to melt. (And always wear gloves while cutting them into individual pieces. “Your fingerprints will get all over the caramels and look horrible,” says my mother.)

6. Pop your caramels in the fridge for 15 minutes before cutting them. This will help them firm up enough to cut them into clean pieces. It’s not necessary, but it can help you cut perfectly geometric pieces.

So with her words of wisdom in mind, I dove into the caramel-making on my own for the first time. Smooth, reflective, and mahogany-colored, they smelled just like my mother’s, only punchier and more acidic. The scent of burnt sugar took me way back, yet the sharpness of the balsamic hit my nose in a new way. I can’t say that the vinegar made the caramels better (I could never!), but it certainly created something entirely different and exciting. They were bright, rich, and complex; you wouldn't think you were tasting balsamic vinegar, yet you’d know there was something else going on. Just like adding flaky salt enhanced my mother’s caramels, the balsamic added depth, too. It was both familiar and foreign, my mother’s old recipe, born again, in my kitchen.

I can’t remember the last time I made caramels with my mother — it’s been at least 15 years — but the recipe has shaped my life in ways I cannot describe. The ritual of sitting in the kitchen with her, stirring the hot sugar and wrapping each caramel to be sold to her doting customers, ignited my love for food. In many ways, it’s the first thing that gave me purpose in the kitchen, and where I now find meaning when I need it most.