Lori Gottlieb wants you to know therapists are humans, too 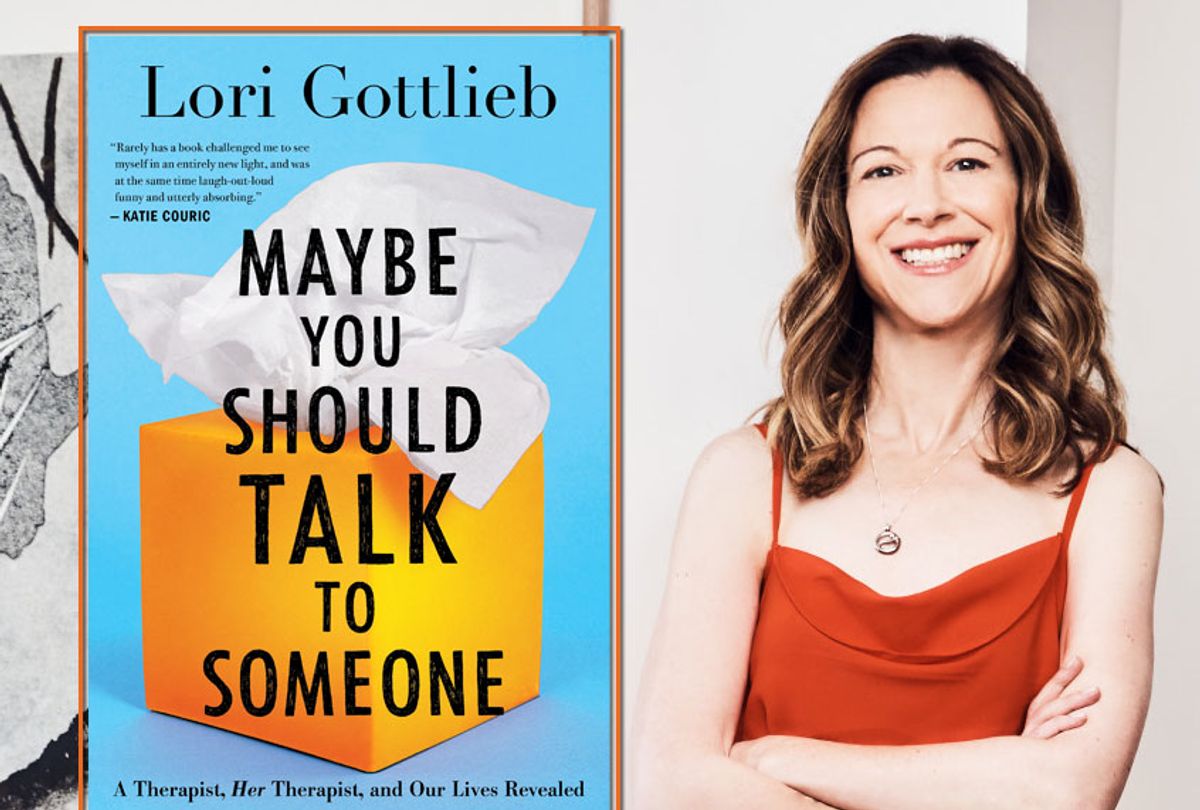 It is easy to mistake a therapist for a supernatural being. They are good listeners, incredibly compassionate, and help us uncover the many ways in which we stand in the way of our own happiness. Is that because they are just so blessed to have no challenges and hardships in life at all? Psychotherapist, journalist, and former Salon contributor Lori Gottlieb is here to tell us, no, that is definitely not the case.

In her new book, "Maybe You Should Talk to Someone," Gottlieb reveals that yes, therapists are just like us. In the wake of an unexpected breakup, Gottlieb realizes she needs to seek out therapy herself to move past it. The book is just as much about Gottlieb’s personal journey as it about her patients’ transformations in the therapy room, too. The inclusion is an intentional one as Gottlieb is making an important point: she is just another “card-carrying member of the human race,” and there is something we can learn from each and every one of us.

I spoke to Gottlieb via phone about her new book, therapy, and what plagues humanity in today’s fast-paced world.

Yeah I can see how there are similarities and how both careers have helped you become a better version of each one, because of the other. In your book, there's so much self-awareness and insight, which I think really shapes it. And I'm curious if you can share more about the creative process around that and how you were able to capture those realizations and epiphanies.

When we see ourselves in someone else's story, or we say, "Yeah that's me." Or "That's someone I know." It's, I think, much more effective than writing a book where you say, "Okay I'm going to download all the insights into chapters." I think that the insights are kind of woven throughout in a way that stays with people longer.

I absolutely agree with that. And more, just about the book. I thought it was so cleverly structured. Two parts which reflect two sides of your personal story, but it also includes your patients’ stories and while they're technically separate, they're all connected in a way to a larger theme. Can you speak more about that?

I think the larger theme has to do with that we're all more the same than we are different. I think that they all have similarities that you wouldn't see on the surface. I have similarities with them [the patients] that you might not see on the surface. But I think it becomes very apparent that we all, at our core, are dealing with very similar issues about how to love and be loved. About regret, about choices, about control and uncertainty. About our mortality and dealing with the reality that we don't have forever to live our lives. We need to be more intentional about what we're doing.

I just love the vulnerability in the book. And how you're sort of de-stigmatizing the idea that therapists have, for lack of a better phrase, their shit together.

In the beginning of the book you ask: “How do we change” and answer it by saying “in relation to others.” That can be easier for therapists, but I'm wondering how you think those who are in the therapy world can do that, too.

I think it's about paying attention. I think sometimes we're so wrapped up in our projections and what we think other people are thinking or feeling about us, and we're not really listening to what people are telling us.

Being a human means having problems and challenges and hard days, but as you mentioned in the book, people aren't so excited to talk about their emotional woes as they might be to speak about their physical ones. It is interesting when you put it in that perspective.

Yeah. I mean I think so many times people feel something, and they feel like ‘I don't want to feel that feeling’ and so they repress it or they ignore it or they feel like their problems aren't big enough to really get help or talk to someone about it. You know that stiff upper lip. Like well yeah I've been feeling sad for two months, but you know look at all the good things I have in my life. There’s no reason for me to feel sad. I don't have a reason, they feel like they need a reason. But if you were having some weird chest pains or something for months you would get it checked out, you wouldn't wait till you had a massive heart attack.

So you can't just get rid of feelings. Your feelings are your feelings and don't judge your feelings. Use them like a compass, they will guide you to tell you something important about your life. You will discover, well if you’re sad, ask “What's not working in your life?” If you’re envious, ask “What do you want in your life that you're not going after?” If you're angry, wonder what is causing that. It will tell you that something isn't working and it will help you to understand how to make it work better, but you can't do that if you're pretending the feelings aren't there.

I think our culture often encourages that we should just forget about our feelings and not pay attention to them or just sort of toughen up.

Right, well I talk about in the book you know the hierarchy  of pain, but there is no hierarchy of pain. People rank their pain so much and they you know it’s almost like it has to meet a certain threshold before it’s worthy of attention. And that's just not true. Your pain is usually systematic something deeper.

I'm wondering what do you think about the role happiness plays in our society right now. Because in my opinion there is a lot of pressure to be happy. And I'm wondering if you think that, that pressure kind of makes us less happy in a way.

You say in your book a lot of your research comes from the subtleties you notice in the therapy room. Have there been any new ones since you’ve written in your book? Any trends?

I think that the things people come to therapy with are age-old and sort of just what we struggle with. But I do think that the problems are  by things like, I think I mentioned in the book that my supervisor said we are all trying to hurry to finish our hours and move in the speed of want.

And I think I see that a lot in the therapy room is this speed of want. That this immediate gratification, this difficulty having patience or waiting for things to unfold in their more organic way. People wanting to know very quickly in relationships, you know, like after a first date or second date, without getting to know a person. Not sticking it out at the job for more than a year because it's hard or they don't like it, you know without really giving things time and. I think time and patience can reveal something really important to you if you aren't in such a hurry. And I don't know what people are all rushing towards.

People often believe that therapists are there to give them advice or to save them.  but that's really never the case right? A therapist can never tell you what to do and so I'm wondering if you can explain to those who might have that idea why that is?

Yeah. So you know I think a lot of people feel like they don't understand why therapist won't give them advice they feel like, well I'm paying you good money and I come here every week and what good are you? And we don't give advice for a lot of reasons. One of which is, you know I have taped up in my office this word Ultracrepidarianism, which is the habit of giving advice outside one's area of expertise.

And we don't give advice because we don't know what the right answer is for you, and I think that surprises people. I might be seeing a couple, for example, and I would think I would never want to be in that marriage, but you know but maybe for them being in that marriage is the right choice for them.

And you know people say should I have another baby or should I switch jobs or should I break up with this person, and I know what I would do, but I don't know what they should do. We want to encourage their independence and their testing themselves, but also I think we want people to take responsibility for their lives and if you ask another person, your therapist, to make decisions for you. Then if it doesn't go well, you can say, "Ah well that's your fault,” you know.

You know that's not my fault, and you need to be able to take responsibility for your decisions so that you can learn from them, so that if something doesn't go as you planned, you can use that opportunity to learn something about yourself without self-flagellation. Without being unkind to yourself, but simply saying, "Oh! Okay I made that decision, this taught me,” whatever it taught you about yourself, and next time I'm going to make it a different decision. If you don't go through the process of learning from your own decisions, you will be paralyzed with every decision you would ever have to make in your life, and that is a very anxiety-provoking way to go through life.

Right and I think that people think there's often a right decision or a wrong decision.

For most of the decisions that we're going to make in our lives there's no concrete right or wrong decision, they’re just different. If you take X it would be different from Y, but it doesn't necessarily mean it will be better or worse. There is always going to be a loss and gain with every decision you make.

So true. Thank you, Lori!