The artist/activist was shot and killed Sunday in his own community, which he spent his career investing in 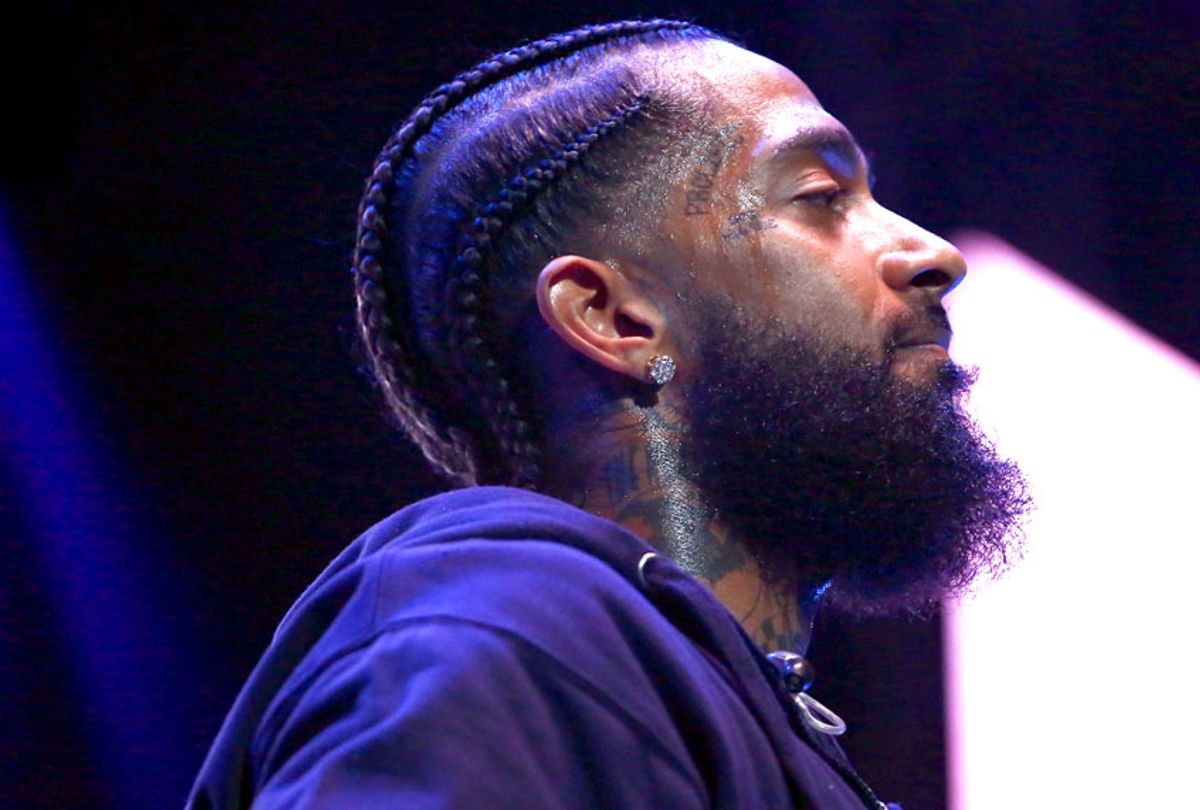 Grammy-nominated rapper, entrepreneur and community leader Nipsey Hussle, born Ermias Davidson Asghedom, was shot on Sunday in Los Angeles in front of his Marathon Clothing store and died from his injuries, according to police. The 33-year-old musician leaves behind two children, his longtime girlfriend actress Lauren London, and a global community of fans and supporters who were affected by his thoughtful and inspirational music as well as his larger work to empower the people and neighborhoods of his native South Los Angeles.

Nipsey's sudden death shocked his fans and peers alike, and celebrities like Drake, Colin Kaepernick, Rihanna, and LeBron James have taken to social media to express their admiration for the rapper, as well as their disbelief over Nipsey's life being cut so devastatingly short. Since police have not yet named a suspect, conspiracy theories have also circulated on social media, alleging that Nipsey was targeted by the U.S. government because he was working on a documentary about the herbalist and Western medicine critic, Alfredo Bowman, known as Dr. Sebi. In Nipsey's stellar debut and Grammy-nominated album "Victory Lap," he rapped, "They killed Dr Sebi he was teaching health." For some, the conspiracy theory seems to be a processing mechanism to try to make sense of such a  senseless act of violence against someone who was so widely revered and beloved.

Nipsey's contributions expanded far beyond just music, though, he undeniably altered the industry in substantial ways. He remained proudly independent, self-releasing the bulk of his music through his own record label, All Money In, cutting out any middleman and retaining total artistic freedom. Over the span of a decade, he built a steady and loyal following via his incisive mixtapes. Nipsey was hip hop's best-kept secret until his fame began to catch up to his musical talent. That his technical debut and first mainstream release, "Victory Lap," garnered Nipsey a Grammy nod for best rap album, showed that he has always been playing the long game when it comes to music. As Craig Jenkins wrote for Vulture, "Nipsey was getting better at his craft, becoming a more pointed storyteller without sacrificing the subtle, unpolished, conversational tone that made him an instrumental voice in Los Angeles rap."

As a musical and business innovator, Nipsey's trust in the power of his music and his fans led him to selling physical copies of his mixtapes — which are traditionally free on the Internet and treated as musical offerings in the interim to albums — at lavish prices and under the hashtag #Proud2Pay. When Nipsey priced his 2013 project "Crenshaw" for $100, an impressed Jay-Z bought 100 copies. In 2015, physical copies for Nipsey's mixtape "Mailbox Money" sold for $1,000. The digital versions were all still free, but Nipsey's thinking went that for those who could afford it, quality still mattered and his music was worth paying for — a revolutionary idea in this streaming-dominated era.

“The highest human act is to inspire," Nipsey told the Guardian at the time. "Money is a tool — it’s the means, not the end. [Inspiration is] the metric that dictates whether or not a project is a success. It’s more realistic than trying to aim for radio play, or trying to satisfy an A&R, or the other gatekeepers on these platforms. I don’t even know how to create with those things in mind. But if you tell me the goal is to inspire? That makes my job a lot easier."

Nipsey Hussle was certainly inspirational in more ways than one. As David Dennis, Jr. wrote for the Undefeated, "His business acumen and philanthropy had become as legendary as his mixtapes and albums."

His many business ventures were purposefully rooted in the Crenshaw neighborhood where he was raised, supplying jobs and opportunities for economic growth and sustainability, including his own Marathon Clothing store, the site of his shooting. The plaza on West Slauson Avenue, which Marathon Clothing store was a part of, was a full circle location in Nipsey's own transformation, too. "Before we was renting here, I was hustling in this parking lot," he told Forbes. "It's just always been a hub for local entrepreneurs." Last month, Nipsey and a business partner bought the entire plaza, and planned to build a residential building in it with low-income housing, according to Forbes.

Nipsey also maintained a strong interest in technology, which allowed him to record his early music on a limited budget. On the day before he released "Victory Lap" in 2018, he opened a co-working space and STEM center in South L.A. called Vector 90, in what was meant to be a connector of young people in Crenshaw to opportunities in Silicon Valley and elsewhere. "I just want to give back in an effective way," Nipsey told the L.A. Times after the launch.

"The man was instrumental in a lot of stuff," local community activist Malik Spellman, told the L.A. Times. "Fighting gentrification, trying to stop gang violence." In fact, Nipsey was gunned down a day before he was set to meet with LAPD Chief Michel Moore and Police Commissioner Steve Soboroff to discuss ways to curb local violence, the Commissioner revealed on Twitter.

Nipsey also helped to bring back a roller skating rink that had been a safe space for local kids in his own childhood, and he invested in Destination Crenshaw, an open-air museum of rotating art installations. "He was known to buy shoes for students,"according to the L.A. Times. "He repaved basketball courts and freshened up playgrounds. He provided jobs and shelter for the homeless, and he paid for funerals for those who struggled to bury their loved ones."

The small and large ways Nipsey poured resources back into his community seemed infinite and ever-growing. "Hussle had a vision of a neighborhood built for and by the sons and daughters of South L.A.," L.A. City Councilman Marqueece Harris-Dawson said in a statement. "During his life, he moved from shadows into the bright hope of freedom and community revitalization."

There's something particularly harrowing about Nipsey being gunned down in his own community, to which he remained accessible and connected. As Jenkins wrote, what happened to Nipsey in many ways snuffs out hope: "You get dealt a bad hand, you work to make the best of it, you turn your circumstances around, and you can still get murdered on your own block in broad daylight."

In Nipsey's death, hip hop has lost one of its most authentic, influential voices; Crenshaw lost its local hero; two kids lost their dad, and a community mourns. But conspiracy theories are not the answer to making sense of tragedy. And it remains too soon to assume to know what happened and why. But Nipsey Hussle gave so much; that his death is such a loss, to so many people and communities, is a testament to the massive impact he had in just 33 years of life. As the culture mourns, Nipsey's legacy as an agent of change, as well as his extreme generosity, talent for storytelling, commitment to community building, and unparalleled vision for a better world — beginning in his hometown — will continue to be profoundly aspirational for decades to come.