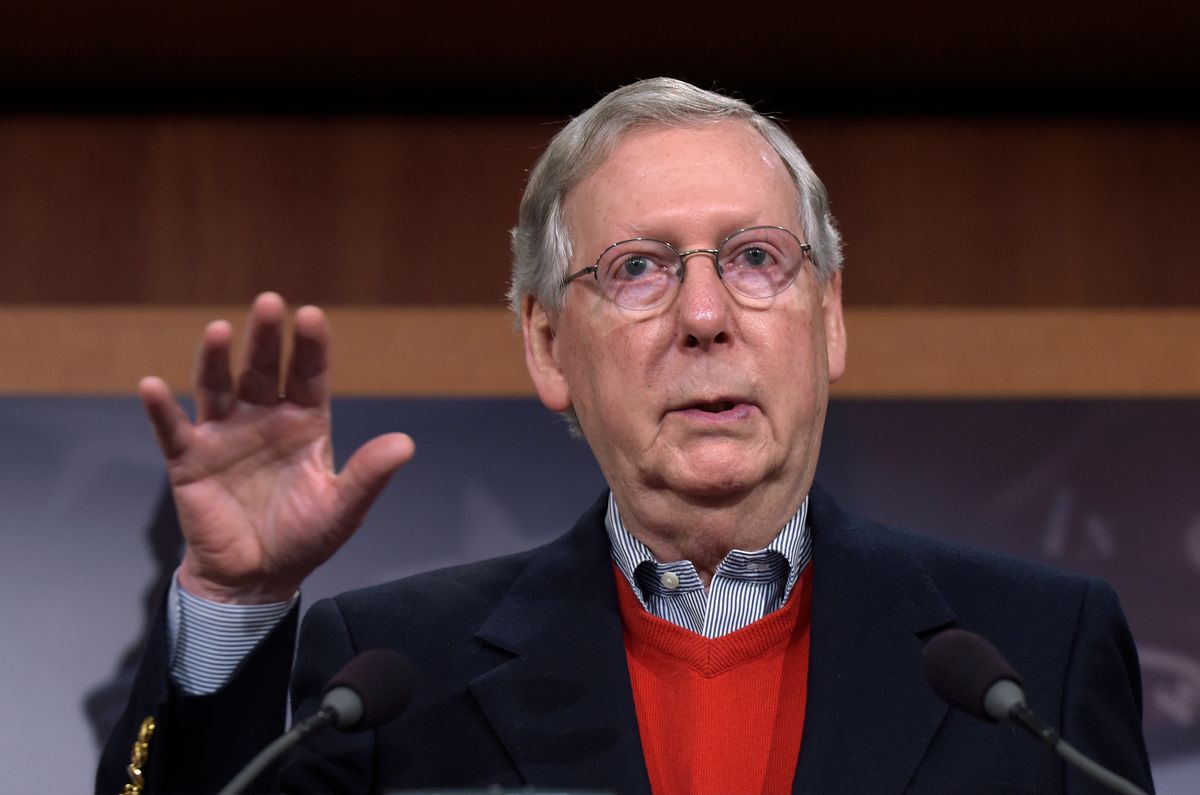 FILE - In this Dec. 12, 2016, file photo, Senate Majority Leader Mitch McConnell of Ky., speaks during a news conference on Capitol Hill in Washington. The government's ethics office says several of President-elect Donald Trump's Cabinet choices have not completed a review to avoid conflicts of interest even as Senate Republicans move rapidly to hold at least nine confirmation hearings next week. In a letter to Senate leaders, Walter Shaub, the director of the Office of Government Ethics, described the current status of several nominees, many of whom are billionaires and millionaires, in the ethics process and expressed concern about the lack of ethics reviews just days from committee hearings. (AP Photo/Susan Walsh, File) (AP)
--

Senate Republicans are poised to speed up the the confirmation of hundreds of President Donald Trump's nominees by pushing through a proposed rules change that would dramatically limit the debate time required to confirm district judges and most executive nominations.

Senate Majority Leader Mitch McConnell, R-Ky., who has expressed support for the rules change, is expected to set up a vote on the matter this week. In a speech on the Senate floor, the Kentucky Republican accused Democrats last week of "unprecedented obstruction" when it comes to "non-controversial" nominations and claimed the resolution was a way to "restore the Senate's tradition in the area."

"A minority of senators have used Senate procedure to systematically prevent the president of the United States from putting a full team in place," McConnell said in his floor remarks. "The American people deserve the government they elected."

McConnell added that Democrats would also benefit from the rules change and warned that the status quo would "virtually guarantee that any future Democrat administration is subjected to the same paralysis." "This is a change the institution needs," he added.

The rules change, introduced by Republican Sens. Roy Blunt of Missouri and James Lankford of Oklahoma, would reduce debate time to up to two hours for most lower-level executive branch posts and district judges after cloture is invoked. Currently, nominations face up to 30 hours of post-cloture debate. Supreme Court and circuit court nominees, Cabinet-level positions and roughly a dozen board and commissions positions would be exempt from the rules change.

Senate Minority Leader Charles Schumer, D-N.Y., spoke out against the rules change resolution last week after McConnell brought it up on the Senate floor.

"McConnell's approach has always been to manipulate Senate rules when it helps him and then change Senate rules when the tables turn," Schumer said in a statement. "This is just another step in his effort to limit the rights of the minority and cede authority to the administration."