Gidley doubled down on Trump's false claims that the U.S. territory "got 91 Billion Dollars for the hurricane" 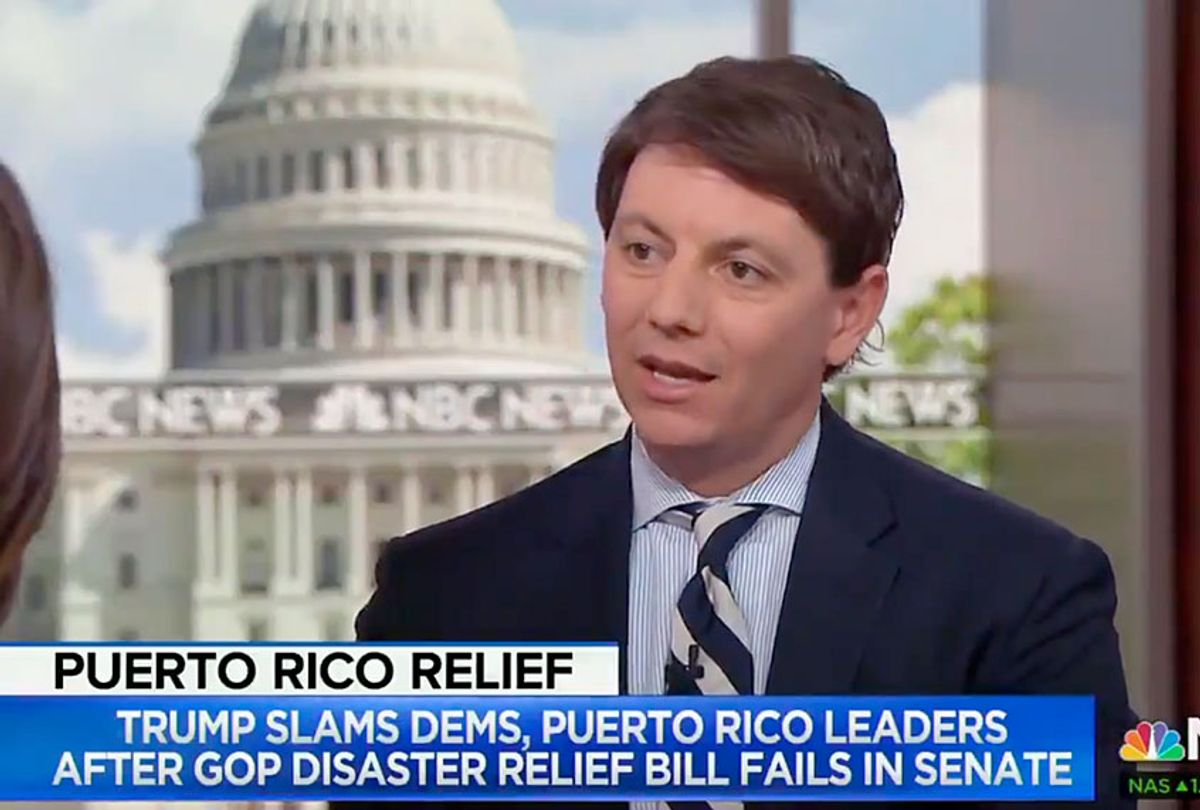 White House deputy press secretary Hogan Gidley twice referred to Puerto Rico as "that country" in a television interview Tuesday, in which he defended a series of disparaging tweets about the U.S. territory sent by President Donald Trump.

Trump complained Monday night about the amount of federal aid going to the island as it continues to recover from the devastation caused by Hurricane Maria in September 2017, calling its politicians either "incompetent or corrupt." He claimed the leaders of the territory "only take from USA," in spite of the fact that Puerto Rico is a U.S. territory and its people are American citizens.

In a Tuesday morning tweet, Trump falsely claimed Puerto Rico "got 91 Billion Dollars for the hurricane." It is unclear how the president arrived at the $91 billion figure. The Washington Post previously reported that the $91 billion figure the president has complained about is likely the sum of $41 billion in approved aid and a $50 billion estimate of recovery costs over the next 20 years. However, only a fraction of that money has been allocated to the island so far, and even less has reached it, the outlet noted.

Gidley doubled down on Trump's false claims Tuesday as he claimed Puerto Rico's politicians had mishandled the aid they have received thus far in an interview with MSNBC's Hallie Jackson. He insisted Puerto Rico "has received more money than any state or territory in history" for rebuilding endeavors following a natural disaster, which Jackson asserted was "not true" as she invoked the cost of recovery efforts in New Orleans after Hurricane Katrina.

"With all they've done in that country, they've had a systematic mismanagement of the goods and services we've sent to them," Gidley said. "You've seen food just rotting in the ports. Their governor has done a horrible job. He's trying to make political hay in a political year, and he's trying to find someone to take the blame off of him for not having a grid and not having a good system in that country at all."

Jackson repeatedly called Gidley out for "things that are not true" as she grilled him about Trump's claim that Puerto Rico somehow "takes" from America even though it is a U.S. territory.

"Does he believe they are not equal U.S. citizens?" Jackson asked the deputy press secretary. "Why would he say they're taking from the U.S. when they are part of the U.S.?"

Gidley called the notion that Trump does not view Puerto Ricans as U.S. citizens "absolutely ridiculous," claiming the president is supportive of its people and pointing out he traveled there after the hurricane made landfall.

"He gave them a lot of money," Gidley added. "They have mismanaged and misused that money. It hurts their people. That's what he's upset about."

Later on in the show, Jackson pressed Gidley about what he meant when he referred to Puerto Rico as "that country." The deputy press secretary attributed his misstatements to "a slip of the tongue," claiming he had intended to say "territory."