How far will Trump go to suppress the Mueller report? Probably all the way

Since Trump has been totally "exonerated," he should have no problem letting us see Mueller's full report. Right? 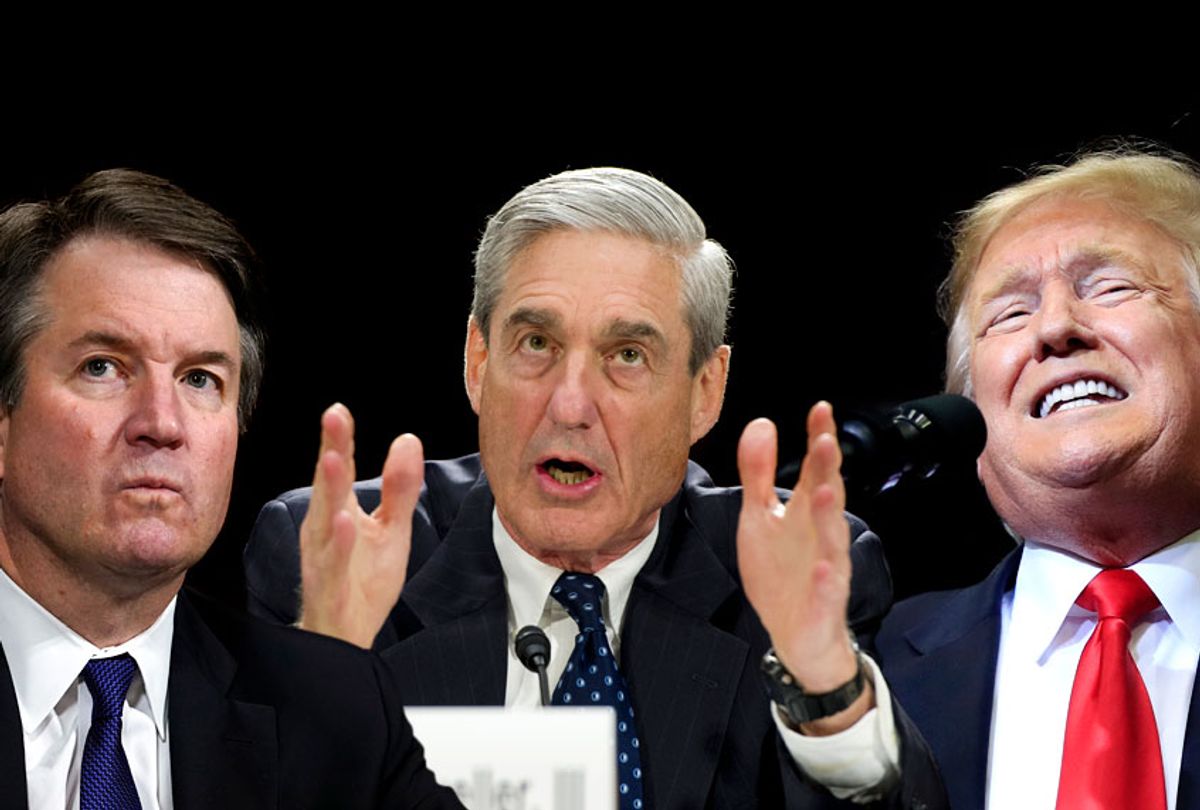 We’re not breaking any news when we observe that Donald Trump is corrupt, destructive and dishonest. Stop the presses, I know. Nevertheless, it’s endlessly laughable to me that anyone believes his serial corruption will stop short of tampering with the Mueller report.

In addition to the nearly 10,000 lies he’s told since inauguration day, Trump’s cover-ups and fabrications are well documented. Do the list. Trump has hilariously fabricated his health status -- we know this because his personal physician, Dr. Harold Bornstein, confessed to it. He lied about his inaugural crowd size. He has claimed to have the biggest election victory ever, despite the existence of, you know, history. According to the sworn congressional testimony of Michael Cohen, Trump has also committed insurance fraud, bank fraud and has cheated on his taxes. Indeed, we have yet to see any of his tax returns to prove otherwise.

Let’s not kid ourselves. Trump's refusal to release his tax returns, on top of his innumerable other deceptions, should be a gigantic red flag alerting us to why it’s extremely unlikely the American people will ever see a copy of the Mueller report, at least without crucial sections CTRL-X'ed by Trump and his capos. We’ll be lottery-jackpot-lucky to see an outrageously hollowed-out report -- a skeleton document stripped of anything that might embarrass and incriminate the president. Hell, I’m bracing myself for the possibility that we’ll never see the report at all, at least not while Trump is president. Frankly, this is a safe bet given everything we’ve witnessed so far from this norm-crushing disruption agent.

I hope I’m wrong about all of this. I really do. That said, he’s given us no reason to trust him any farther than we can throw a sack full of Trump Tower Russians at him. We have to assume that right now, as you read this, Trump and Attorney General William Barr are redacting if not outright deleting pages and pages of Robert Mueller’s work. And why shouldn’t we assume that?

Look at this through Trump’s beady eyes. He’s already declared in multiple ways and on multiple occasions that he’s been completely exonerated. He’s declared victory in the loudest and sorest ways possible, shrieking “ridiculous bullshit!” at a Michigan rally, attacking House Intelligence Committee chair Adam Schiff’s neck size and only stopping short of having “EXONERATION!” sky-written above Jim Comey’s house.

Trump and his Red Hats, not to mention horseshoe leftists like Glenn Greenwald and Matt Taibbi, have fully embraced Trump’s counterfactual “exoneration” take. (If they had actually read Attorney General William Barr’s memo, by the way, they’d also realize that Mueller concluded and Barr accepted that Russia attacked the 2016 election in support of Trump.)

Whether he likes it or not, Trump owns this blindingly ludicrous exoneration narrative now. The major problem for Trump, however, is that the Mueller report doesn’t exonerate him. We know this because one of the scant few Mueller quotes in the Barr memo concludes the report “does not exonerate" the president. Likewise, the report could very easily contain pages and pages of evidence of criminal behavior without prosecutorial recommendations, or, at the very least, evidence of deeply unethical behavior by an American president. If it does, do we seriously believe that Donald Trump will ever allow any of that material to see the light of day? This is Donald Trump we’re talking about here -- the Trump University guy. The Trump Foundation guy.

Feel free to blindly underestimate Trump on this one, but if you actually believe Trump will let this information go public without a major battle, I have an aerial photo of his inauguration to sell you. (The most tremendous crowds ever.)

Late last week, Barr issued a second memo walking back the “summary” aspects of his first memo. In this new document, Barr inexplicably added to the list of Mueller items he plans to redact while also insisting that the White House hasn’t expressed any intention to claim executive privilege on parts or all of the report. Uh-huh. Sure they haven’t -- for now. Trump is nothing if not mercurial and if he hasn’t already learned new and damning details about Mueller’s findings, I suspect that when he does, his freak-out will be loud and the Mueller report will become an issue for the courts. We’re well aware that the ideological balance in the highest court in the land is now tilted in Trump’s favor.

To make matters worse, Trump is already floating the concept of blocking the entire report, suggesting on Twitter that the Democrats won’t be happy no matter what he releases, so why bother with more Russia things? For instance, Trump posted this on Tuesday, “There is no amount of testimony or document production that can satisfy Jerry Nadler or Shifty Adam Schiff. It is now time to focus exclusively on properly running our great Country!” Last week, he tweeted, “So maybe we should just take our victory and say NO, we’ve got a Country to run!” Meanwhile, former Rep. Trey Gowdy, a Trump ally, agreed that the Mueller report should never be released, redactions or not. All this is the behavior of an innocent man who's been totally exonerated, yes?

The sooner we accept that Trump is planning to block the report, the more prepared we’ll be for the fight to pry it from his sweaty, stumpy fingers.

If the Ken Starr report had wrapped the same day as the Mueller report, we would already have been able to download it or purchase it in bookstores beginning sometime early last week. Historical precedent and our own lying eyes are screaming out for the truth. The way the Mueller report is being handled is, at best, dubious and, at worst, a criminal cover-up of a report that could contain chapter after chapter of presidency-threatening bombshells about the White House. And we haven’t yet heard anything at ll about the counterintelligence investigation into whether Trump is compromised and working on behalf of Russia over American interests. Imagine the tug-of-war when those details emerge.

All told, there’s no reason whatsoever, in this universe or the next, to justify giving Trump the benefit of the doubt. If there’s one thing we know about Trump it’s that he’ll do whatever it takes to keep himself out of trouble while simultaneously making things worse for himself. Sure, he may succeed in keeping the report out of your hands, but he’ll only manage to appear even guiltier than he already looks.

Trump is a soulless chaos junkie, devoid of core values or any moral compass, so it won’t matter to him how guilty he’ll appear as long as the truth is concealed. That's true of just about everything orbiting his bulbous head, from his tax returns to his inconceivable 2.8 golf handicap to his “astonishingly excellent” health. Trump will never, ever knowingly allow 400 pages of potential nightmares to be ejector-seated into the world. You know, because he’s been totally exonerated.