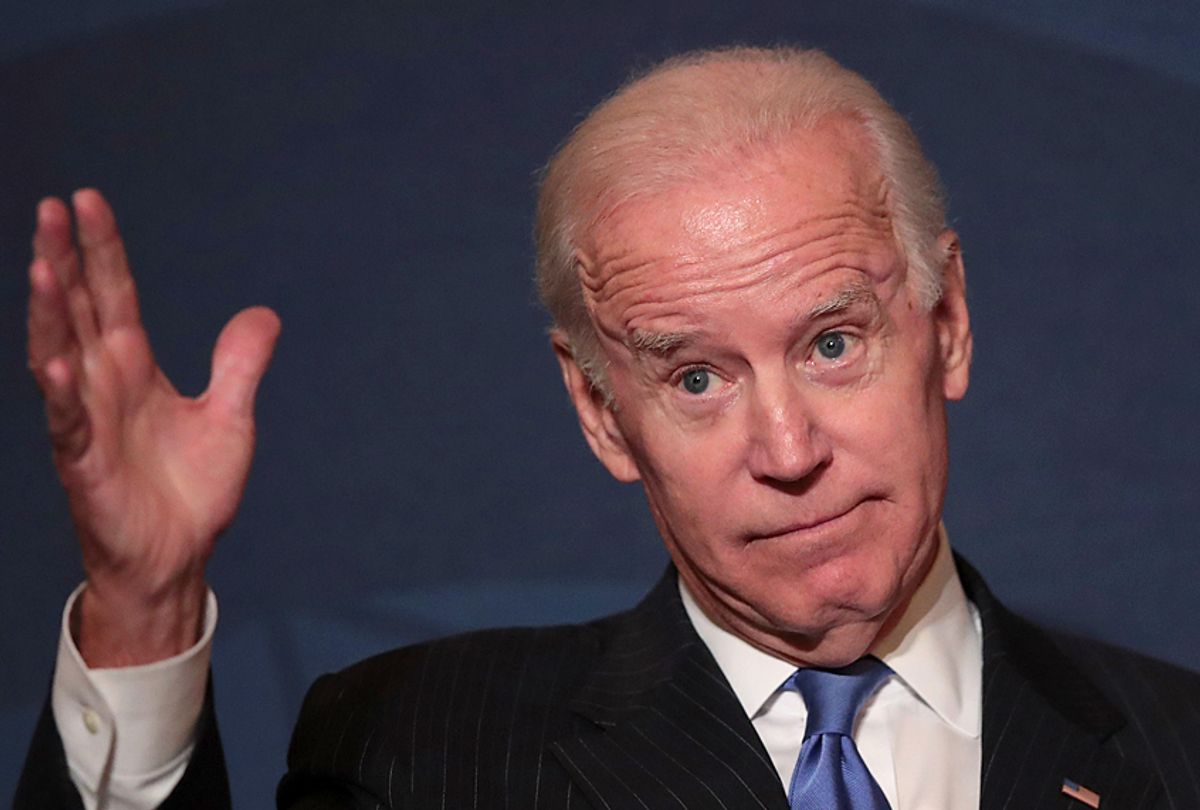 Hidden in a two-minute video meant to respond to various allegations of inappropriate touching came the strongest hint yet that Joe Biden, Barack Obama's two-term sidekick, is gearing up for a presidential run. In a short video released on Wednesday, Biden teased a forthcoming 2020 announcement while promising to “be more mindful about respecting personal space in the future.”

Multiple women have come forward in recent days to suggest that Biden is too familiar -- too "handsy," in the phrase of Salon's Amanda Marcotte -- in public encounters. (No one has accused Biden of sexual harassment, or of anything close to the multiple accusations of sexual assault against President Trump.) In a video released on Twitter, Biden attempts to push back against a building narrative that his tactile style of retail politics is out of step with the #MeToo era.

“I shake hands, I hug people, I grab men and women by the shoulders and say, ‘You can do this,’” Biden said, making no specific apology for his past behavior. “It’s just who I am.”

“I’ve never thought of politics as cold and antiseptic,” he added, acknowledging that his touchy-feely style is no longer socially acceptable:

Opening a political campaign with a heavy dose of damage control may seem on brand for the gaffe-prone Biden, whose two previous presidential campaigns collapsed early amid a sense he was unready for prime time. Aside from an earlier statement and Wednesday’s video, the likely Democratic frontrunner has no effective campaign structure in place to push back on the growing number of women revealing their feelings of unease about his conduct over the years. Since former Nevada assemblywoman Lucy Flores’ account was published on Friday, three more women have come forward to accuse Biden of invading their personal space and making them uncomfortable.

For her part, Flores told CNN’s Jake Tapper on Sunday that she hopes Biden will “change his behavior. I want him to acknowledge that it was wrong.” Flores has said that Biden smelled her hair and kissed her on the back of the head at a campaign event in 2014. Every poll taken so far of the prospective 2020 field show Biden as the Democrat best positioned to take on President Trump, who has been plagued by reports of unsavory personal conduct and has been credibly accused of sexual assault by more than a dozen women. In the face of that contradiction, Biden says he now understands that he must stop touching people without their permission.

"You know, social norms begin to change, they’re shifted and the boundaries of protecting personal space have been reset and I get it. I get it," Biden said on Wednesday. "I hear what they’re saying. I understand it. And I’ll be much more mindful, that’s my responsibility. My responsibility and I’ll meet it."

It’s one of the sorriest almost-kickoffs of a presidential campaign in recent political history, but Biden’s non-apology likely gives him the space he needs to offer a counter-narrative while appearing to be accountable. By all accounts, many liberal voters are ready to embrace Biden’s entrance into the race and won’t blink an eye at these troubling suggestions, especially considering the charges that have left Trump unfazed. But questions linger: Does the former U.S. senator who presided over the Anita Hill hearing understand that to demand women be treated with dignity in the workplace is not self-righteous, is not character assassination and is not applying a purity test. Arguably, it's what makes the Democratic Party credible in the Trump era.

To be certain, Biden has never been accused of anything approaching illegal conduct and his record as a lifelong, dedicated public servant is clear. But when he says that he has used his “whole life to empower women” and to “prevent abuse,” as he did in Wednesday's peculiar video, he must understand that his profoundly mixed record on women's rights and gender equality will be viewed through a 2020 lens.

Whether Wednesday’s apology is enough is for the women who have gone public with their Biden stories -- and, ultimately, the American voters -- to assess. If there is one glaring lesson Biden can learn from the presidential election he sat out last time around, it would be to not repeat some of the same mistakes both Hillary and Bill Clinton made in 2016 when speaking defensively about their support for the now-notorious 1994 crime bill.

Biden, like Sen. Bernie Sanders of Vermont, his likely nearest competitor, voted for the legislation that historians credit with accelerating mass incarceration. As police and criminal justice reform movements ascended in 2016, both of Clintons were caught flatfooted in failing to adequately account for the bill’s devastating impact. Although Bill Clinton eventually apologized for his role, the issue may have depressed turnout of young African-American voters, a critical group in pivotal swing states like Michigan and Pennsylvania that Donald Trump won by agonizingly narrow margins.

Biden will have to account for his support of both this legislation while in the Senate and his role as chairman of the Senate Judiciary Committee during the confirmation hearing of future Supreme Court Justice Clarence Thomas. His advocacy for the Violence Against Women Act remains admirable, but Biden must address his failure to advocate for Anita Hill when she was being attacked by his colleagues on an all-white, all-male committee. Before he swears off personal appeals, Joe Biden can start with a personal apology to Hill. Until then, all non-apologies feel inadequate.