"It wouldn't be a crazy conclusion. How would you like to spend your 70s locked in the White House?" Carlson asked 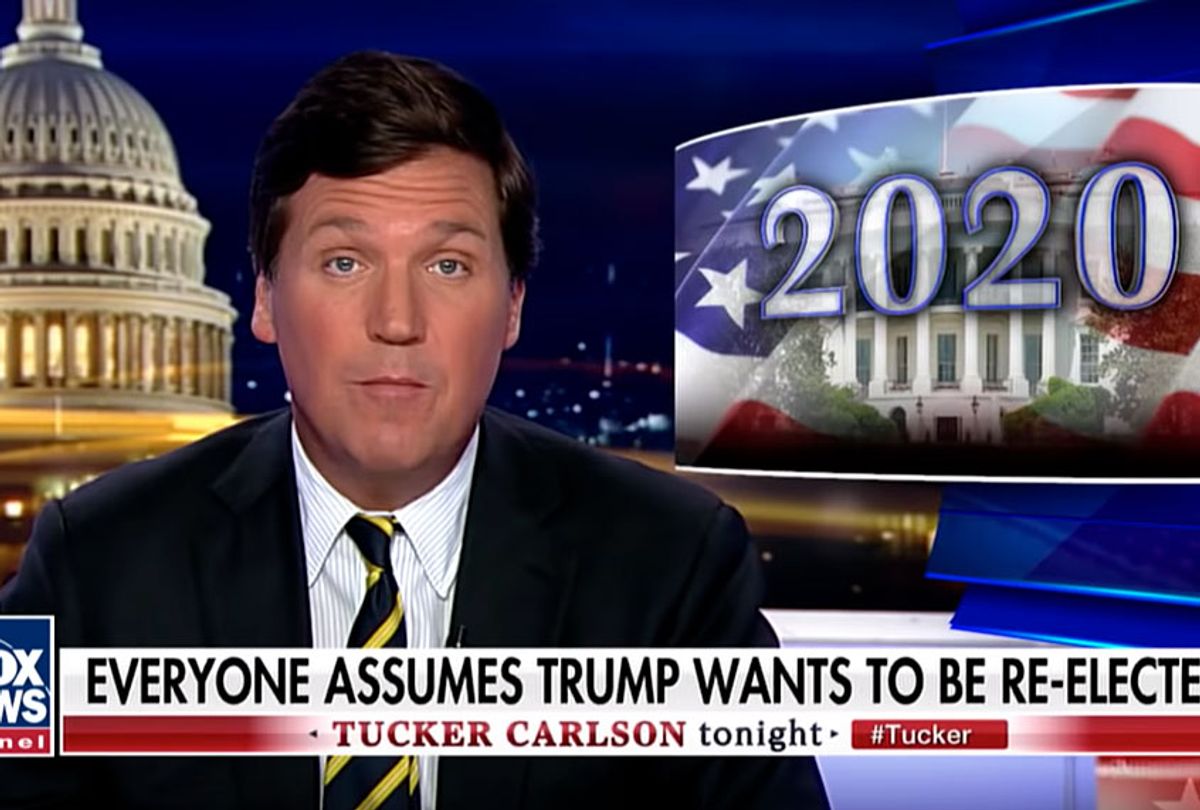 Fox News host Tucker Carlson asked his viewers Thursday night to consider a hypothetical situation: What if President Donald Trump was sick and tired of being president and plans to sabotage his own chances of winning reelection in 2020?

"It wouldn't be a crazy conclusion," Carlson said. "How would you like to spend your 70s locked in the White House?"

The Fox News host then presented examples of what the commander-in-chief could do to doom his prospects of remaining in office for another four years. The segment raised eyebrows at a network that has a cozy relationship with the White House and is known for promoting the administration's conservative agenda. Trump has in return granted former Fox News contributors with positions in his administration, touting its ratings and singing the praise of its TV personalities at his campaign rallies. Sean Hannity, one of the network's conservative pundits, acts as an informal adviser to the president and even joined Trump onstage at his final rally before the midterm election last fall.

But Carlson, who is in the midst of an advertiser boycott after the liberal media watchdog group Media Matters for America unearthed old recordings of him making racist and sexist remarks, has not avoided criticizing the president. In a December interview with a Swiss magazine, Carlson said Trump was "not capable" of achieving his goals and has not kept his campaign promises. The host has also criticized the president for suggesting guns should be confiscated from individuals deemed to be dangerous, even if it violates due process, and for hinting at a deal to protect young undocumented immigrants.

Although some of the network's hosts have criticized the president, most notably for the deal Trump reached with Democrats on immigration and border security to avert a government shutdown and for his decision to withdraw all U.S. troops from Syria, Carlson's suggestion that Trump may be deliberately trying to lose in 2020 to avoid a second term marked an exquisite escalation of his criticisms and a sharp departure from the network's usual coverage.

Carlson on Wednesday outlined the steps Trump would take if he were trying to avoid a second term in the White House.

First, he said, the president may "start by proposing more than half a million dollars in Medicare cuts," noting trims to Medicare spending is "something that nobody outside the libertarian symposia circuit really wants to see."

Second, Trump could "slash funding for the E-Verify program," the web-based system that allows employers to compare documents provided by new hires with government records to confirm employment eligibility. "That would allow companies to keep hiring illegal alien labor in violation of a key campaign promise," Carlson said.

In further engineering his own defeat, Carlson said Trump may champion "bringing in even more low-skilled workers" into the U.S. legally, which, the host said, "would push down the wages of the people who voted for him — the most vulnerable group in the country."

Finally, he continued, the president could "release a bunch of drug dealers back onto the streets right in the middle of the worst drug epidemic in history" and "continue our pointless military intervention in Syria, which in no way benefits the United States."

"If the president did all that, the message would be very clear," Carlson declared. "He has no idea what he ran on in 2016 — he just wants out."

Although the Fox News host detailed plans Trump could take to diminish his odds of securing a second term in November, he said it is possible the president's supporters would still not "get the message" that Trump wants out. To really drive his point home, Carlson said, Trump would "have to do something really extreme to get their attention — something so mindless and counterproductive there's literally no way you can get re-elected after doing it."

"You'd raise gas taxes," Carlson proclaimed. "In fact, the administration is proposing just that." (Trump is reportedly open to increasing taxes on gasoline and diesel fuel — a proposal that may give the president and congressional Democrats a chance to find rare common ground.)

"Anything that raises the price of gasoline, whether it's the 'Green New Deal' or some new tax scheme promoted by a fake conservative think tank, crushes the weakest in our society. Normal people hate it. Many of those people voted for Donald Trump the first time," Carlson continued. "It's nuts."

"Hiking taxes on working class, rural people is not on the list unless you secretly want to retire early," he declared. "In that case, if you're really sick of the job, go with the gas tax."

Watch the full segment below via Fox News: