Legend has it that "Kung Fu" was taken from Bruce Lee's idea. Cinemax's new series inclusively realizes that vision 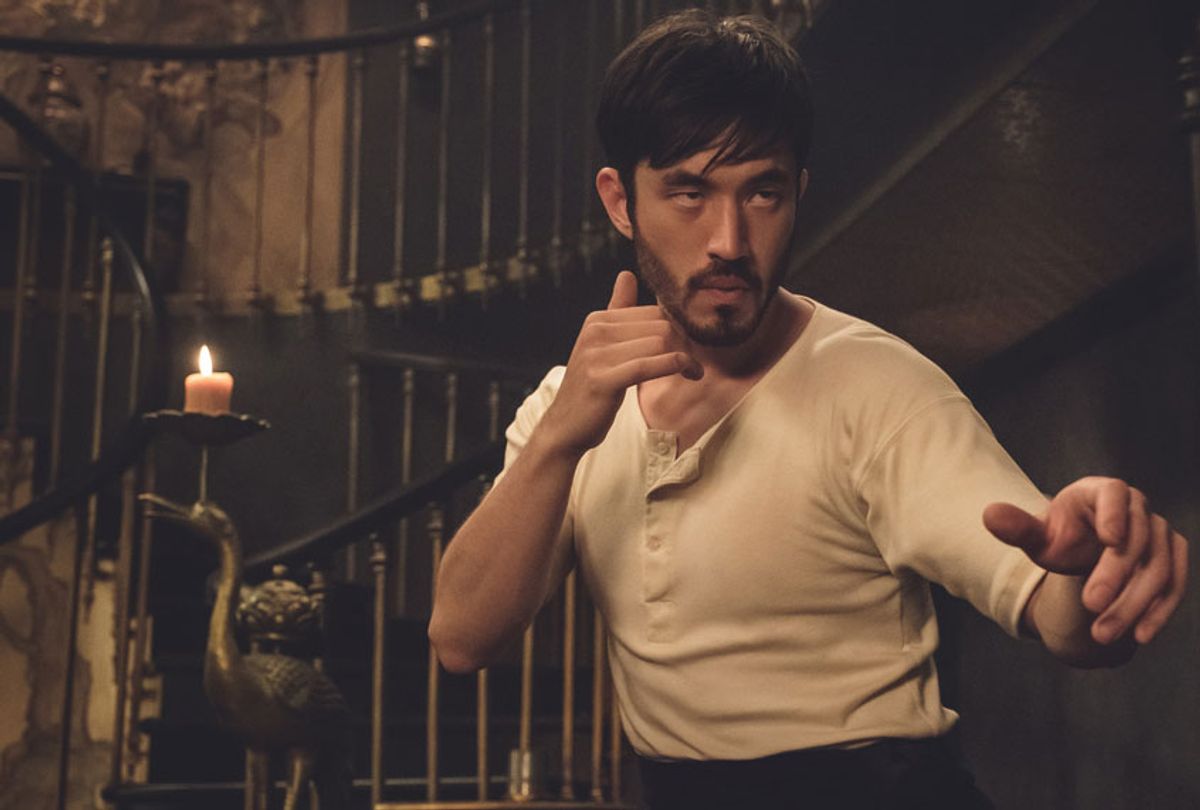 Moments in “Warrior” double as deep bows to Bruce Lee’s legacy. Keep your eyes peeled for a moment in the first episode when martial artist Joe Taslim, who plays the top enforcer for one of the main Tongs in late 19th century San Francisco, shows off his lightning-paced footwork as he faces off with the series’ hero, played by Andrew Koji.

Or later in the season, when Koji’s Ah Sahm, partnered with a friend, rides off into the sunset on horseback, wide-brimmed hat on his head. Two moments Lee would have loved to realize himself on film, but — as anybody familiar with TV history knows — never did. Lee did enjoy limited fame on American TV as Kato, the chauffeur and sidekick to Van Williams’ “Green Hornet.”

But this was a means to an end. According to the memoirs of Lee’s widow Linda Lee Cadwell, the icon pitched a series to Warner Bros. in which he would have starred as an itinerant hero in the late 19th century having adventures as he traveled the country. Both studios passed, only for Warner Bros. to turn around and release “Kung Fu,” casting David Carradine in a similar version of the role Lee envisioned for himself.

“Kung Fu” went on to make Carradine a star, and a series of films produced by Hong Kong studio Golden Harvest made Bruce Lee a legend. But Lee’s sudden death in 1973 left unfinished business, this series being part of it.

That said, I’m not sure anyone can rightly argue that “Warrior,” premiering Friday at 10 p.m. on Cinemax, could have been rendered as magnificently or bloodily then as it is now, in part because in Lee’s time the expanse of martial arts into the American cinematic marketplace was not as refined or robustly budgeted as it is today. And ‘70s-era TV? Forget it.

But in the hands of Jonathan Tropper, who created the series and executive produces alongside Justin Lin and Shannon Lee, “Warrior” wears a level of sensational, adrenalized polish appropriate to an action series about a skilled fighter who crosses the ocean to search for his sister in 1878, and is immediately pressed into the service of one of the top bosses in San Francisco’s Chinatown.

“Warrior” is a dizzying shuffle of competing themes and storylines, managing a brewing war between local Tongs, labor disputes between the Chinese and Irish workers, family drama and political intrigue all at once, and sometimes within the same scenes.

Koji’s Ah Sahm is the Bruce Lee stand-in here, establishing his right to wear that mantle in a cold open that places him in a three-on-one fight in which it’s soon made obvious that the three are vastly outmatched. His cheek and fighting ability earn him the attention of a local fixer, Chao (Hoon Lee), who turns him over to the Hop Wei to work as an enforcer.

Quickly, Ah Sahm must learn to navigate the politics of the local underworld, in which his gang’s leader Father Jun (Perry Yung) and his son Young Jun (Jason Tobin) navigate an uneasy truce with the rival Tong lead by Mai Ling (Dianne Doan).

In the midst of this sits Ah Toy (Olivia Cheng), a local madam who holds more power than she initially lets on. On the sidelines are haggard cop Bill O’Hara (Kieran Bew), whose new recruit Richard Henry Lee (Tom Weston-Jones) doesn’t automatically go along with O’Hara’s methods of skull-cracking to keep the peace.

And there are other white factions to contend with in a city boiling with anti-immigrant prejudice, including the leader of the white dockworkers, Dylan Leary (Dean S. Jagger), and a mayor, Samuel Blake (Christian McKay), who is holding back a few secrets from his wife Penny (Joanna Vanderham).

There are a lot of players to get to know in “Warrior,” each crossing paths with the other at various times and to different degrees in a city plagued by friction between the Chinese working class and the Irish, whose status as the previous wave of immigrant outsiders places them half a notch above their fellow newcomers on white society's social and political ladder.

The primacy of Ah Toy’s brothel in the series is bound to lead to much eye-rolling at the Cinemax of it all; the late-19th century setting will inevitably lead to mentions of “Deadwood” or “The Knick,” which aren’t quite fair and, in some respects, set “Warrior” up to compare poorly. All are dramas that feature vivid, gory violence, but the first two are prestige series, while "Warrior" is designed primarily to stun the audience with the ever-more creative ways main characters kick their challengers in the face.

But it's also important to consider “Warrior” as a product of this most recent incarnation of Cinemax; the brand now mainly identifies with action as opposed to late-night skin flicks. “Banshee,” Tropper's previous creation for the network, struck a perfect balance between noir drama, unchained action and sexual content; so it is with "Warrior" as well.

But “Banshee” was always the kind of series fans had to defend as being smarter than it might have seemed in its first two episodes. Not so with “Warrior,” which establishes what it is up front and keeps up the energy from there.

Topmost, “Warrior” is a good time, satisfying anyone who appreciates intricate fight choreography that emphasizes the physicality of its actors. Stunt coordinator Brett Chan, who mapped out the action sequences for Netflix in both “Marco Polo” and “Iron Fist,” deserves as much notice for his work on the series as its stars do. Through him the cast strives to live up to the expectations of a project that has Bruce Lee’s name on it.

But the worth of “Warrior” is in other details too, like the seamless transition between English and Chinese translated via subtitles, which occurs whenever the Chinese characters are speaking in the presence of white people, whom they refer to as ducks. This is a smooth way to center the show's Asian characters, when in TV's past those narratives and perspectives would have been relegated to a side mission to be visited by white heroes.

And the same can be said of how "Warrior" handles sex —  it makes no apologies for the quantity of it or the show's casual nudity; madams and brothels built the major cities in the Old West, don’t you know. In fairness there’s a certain amount of silly predictability to it as well. When a man and a woman who haven’t smashed before suddenly find themselves enjoying tea in a fancy room that just happens to have both a daybed and a clawfoot tub . . . I mean, what else is supposed to happen?

At the same time, the show grants the same level of agency and ferocious, dangerous nature to its women as it does the men. Cheng is wonderful in this regard, but it's especially satisfying to see such power wielded by Doan.

The Canadian performer’s most memorable recent role was a co-starring turn on “Vikings,” in which she enjoyed the distinction of being the show’s first non-white character with a major role, and also ended up being murdered by the main character, who suffered no consequences for his action because hey — it’s “Vikings.” Owing to Mai Ling’s status in this world there’s no way Doan’s character is destined to go out so quietly, and she owns that sublimated rage and heartlessness completely and with aplomb.

And it cannot be pointed out and celebrated enough that this is a series focused on Asian actors, playing deeply-written period roles not often available for actors of color, speaking to elements of history and their underappreciated place in it with a passion and vigor.

Echoes of today’s xenophobia are woven throughout “Warrior,” of course. When Mayor Blake makes a speech decrying the inability of white women and children to walk the streets of San Francisco free of fear “from a foreign criminal element,” the lusty response from the crowd sounds identical to the audio from recent political rallies.

And through its character development the series honors the style Bruce Lee probably had in mind when he conceptualized his Western-meets-Eastern show. Four decades ago, however, he probably couldn’t have gotten away with featuring blunt dialogue that illustrates what it is to be fated to be viewed as a foreigner in one’s own place of birth. “I was born in San Francisco,” Young Jun spits, “but I’m sure not fuckin’ American.”

Of course, such moments aren’t the primary reason people will show up for “Warrior.” The sales pitch is that it was made in Bruce Lee’s name and vision, and the closers are the fleet, brutal action sequences.

“We are a nation of warriors, not slaves,” another character observes, although one can easily envision Lee speaking that line. He might as well, since his presence is all over this show, which pulls no punches, holds nothing back and, best of all, makes a tale that would have once been seen as a sidekick’s story into the A-plot. It’s too bad Lee isn’t here to see “Warrior” arrive on TV, but it is wonderful that audiences will get the chance at long last.