A blow but not fatal: 9 months after Janus, AFSCME reports 94% retention

New membership data revealed a decline that experts say could mark the beginning of larger losses, but is not fatal 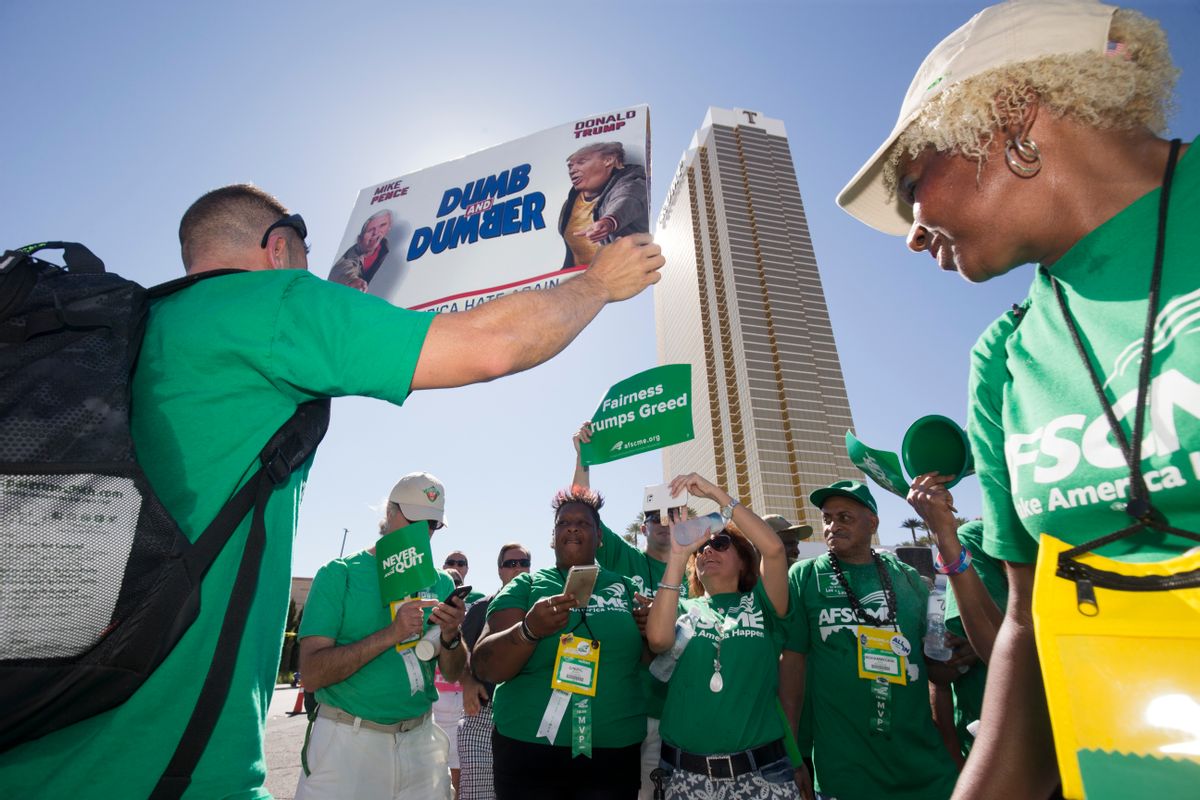 FILE - In this July 20, 2016, file photo, Brian Poncin, of Chicago, a member of the American Federation of State, County and Municipal Employees (AFSCME) union, Local 2858, holds a sign with images of Republican presidential nominee Donald Trump and running mate Indiana Gov. Mike Pence during a rally at the Trump International Hotel Las Vegas in Las Vegas. Union officials announced Wednesday, Dec. 21, 2016, that workers at the Trump International Hotel in Las Vegas reached a contract with management after pushing for negotiations for a year, while management at a Trump hotel in Washington, D.C. has agreed to allow a unionization campaign at that property. (Steve Marcus/Las Vegas Sun via AP, File) (AP)
--

This article originally appeared in In These Times. "

The labor union in the crosshairs of the right wing-led effort to gut public sector unions through a landmark Supreme Court case released new membership data Wednesday showing a decline that experts say could mark the beginning of larger losses, but is far shy of a fatal blow.

The numbers offer the first concrete picture of the preliminary fallout from last year’s Janus v. AFSCME decision that eliminated public sector unions’ ability to collect agency fees—also known as “fair share” dues—from workers who do not sign up for full membership in the union but still benefit from its representation.

Many predicted the case, bankrolled by a network of conservative billionaires and think tanks, could put the nail in the coffin of public sector unions by encouraging workers to opt out of paying dues in favor of becoming “free riders.”

AFSCME’s numbers, part of its annual Department of Labor filing, show one of the largest public sector unions has managed to dodge a worst case scenario in the immediate wake of Janus, due in no small part to its preparation for the decision, which focused on retaining rank-and-file members.

Since unions braced for revenues from agency fee-payers to evaporate when the Janus decision came down, a 6 percent decline in membership—less than the total number of “fair share” workers AFSCME represented last year—was an anticipated loss.

However, AFSCME's member sign-ups since the Janus decision outpace member opt-outs at a rate of 8 to 1. The union reported an increase of 18,638 dues-paying retirees and 9,097 dues-paying members, though it is not clear whether those members are new hires or former fee-payers who got on board as full members.

AFSCME previously told "In These Times" that nearly 200,000 fee-payers joined as full union members ahead of the Janus decision as part of a one-on-one union-building strategy it says marked a “major culture shift.” In 2017, 112,233 of the 1,411,877 workers it represented were “fair share” fee-payers.

“In overwhelming numbers, AFSCME members have blunted the attacks of the wealthy special interests and chose to stick with their union,” AFSCME president, Lee Saunders, said in a statement Wednesday.

But experts Robert Bruno and Frank Manzo, who released a report forecasting the impacts of Janus ahead of the Supreme Court decision last year, warned that AFSCME’s preliminary 6 percent membership decline could still put the union on track to suffer the losses their research projected.

“A loss of 82,000 is nothing to brush aside,” Manzo, policy director of the Illinois Economic Policy Institute, told "In These Times."

“These data show that public sector union membership has dropped, and they suggest that it may be on track to decline dramatically over time,” he said. “But, they also show that the labor movement can take concrete steps to avoid that fate.”

In their report, Manzo and Bruno predicted a loss over three to five years of 726,000 members in unions representing state and local government employees—and a 3.6 percent drop in wages. They see AFSCME’s membership contraction, representing 11 percent of their total forecast for the sector, as consistent with their long-term outlook.

Manzo said that while the labor movement should be “encouraged” by AFSCME’s 94 percent retention rate, it should also be “concerned” about the losses, noting that reduced organizing budgets could have a “cascading effect” in years to come. “The union needs to take steps, and frankly policymakers should consider taking steps, to correct that loss,” he said. For now, AFSCME plans to expand its organizing resources.

The membership data comes on the heels of an onslaught of well-funded right-wing efforts targeting public sector union members with opt-out campaigns in attempts to chip away at membership in the wake of Janus.

“This has to be measured against the resources that have been marshaled by anti-worker, anti-union organizations,” Robert Bruno, professor at the University of Illinois at Urbana-Champaign School of Labor and Employment Relations, told "In These Times" of AFSCME’s membership levels. Despite the net loss, unions’ ability to attract members—whether by converting former fee-payers or recruiting new hires—while facing aggressive anti-union campaigns is notable, Bruno said.

An AFSCME representative told "In These Times" the reduction represents the loss of former agency fee-payers. However, the national data doesn’t offer a detailed picture of who is opting out, including a break down of which of the 23 states where agency fees were previously allowed are bearing the brunt of the losses, or if any workers who previously paid full membership dues have deserted.

Many variables could still shape the way Janus plays out in the long-term, including legislation to mitigate the impacts, as well as any further court decisions that could imperil the future of public-sector unions.

Since Janus, conservatives in a number of states have launched efforts to force unions to pay back agency fees collected prior to the decision, which could defund these unions. So far, such efforts have fallen flat in Alaska, California, Illinois, Ohio, Oregon and Washington.

But Moshe Marvit, a fellow at the Century Foundation, warned the threat of these lawsuits “could be seriously damaging” despite their “dubious” arguments. “The theory in Janus never won before any judges, before it won at the Supreme Court,” he told "In These Times."

Meanwhile, the Buckeye Institute—part of the State Policy Network of anti-union groups that funded Janus—has filed three cases taking aim at exclusive union representation. Janus allows union members to opt out of membership and paying dues, but the union still has a duty to represent all workers in the bargaining unit. The lawsuits, filed in Maine, Minnesota and Ohio, argue that automatic representation violates workers’ First Amendment rights.

Last month, an appeals court rejected a similar challenge to exclusive representation brought by the Freedom Foundation and National Right to Work Foundation in Washington, finding union representation did not infringe on free speech rights.

Marvit dubbed these lawsuits a kind of “bait and switch” after Janus as anti-union interests seek new ways to “use the First Amendment to limit membership and limit funding of unions.” The Janus decision scrapped agency fees while keeping exclusive representation intact, finding the two “are not inextricably linked.” But Marvit doubted the Supreme Court would offer “any principled consistency other than a sort of anti-union animus” if it came to ruling on exclusive representation.

Marvit said that the free speech in logic in the Janus ruling—claiming that agency fees compel speech and violate the First Amendment—could create space for litigation aimed at carving out pro-union rights, though he admitted this would be an “uphill battle.”

“Unions for a long time in litigation have been on the defensive,” he said.” This has opened up and triggered a new desire to go on the offensive with lawsuits and see in what ways it can lead to an expansion of actual free speech, not just money as speech in the way that Janus did.”

But even as the right-wing groups behind Janus seek to smear public sector unions as unfairly dipping into workers’ pockets, approval ratings of labor unions are the highest they have been in 15 years, according to Gallup.

Ken Jacobs, chair of the Labor Center at the University of California Berkeley, told In These Times that Janus has coincided with a “huge shift” in public opinion toward the labor movement, boosted in part by the recent wave of historic teacher strikes. The recent government shutdown also offered “a reminder of what public workers do and how important they are,” he said.

Jacobs added that while it is still early to assess the impacts of Janus, how unions prioritize resources as they tighten their belts to adapt to the financial fallout from Janus will play a key role in defining their long-term capacity to withstand such an existential threat.

“One of the important things we have seen is a real increase in union activity in the public sector, especially among teachers,” Jacobs said. “That deep worker engagement will be essential for public sector unions going forward.”