What to watch this week: The return of "The Chi," "Native Son" on HBO, and "A Discovery of Witches" 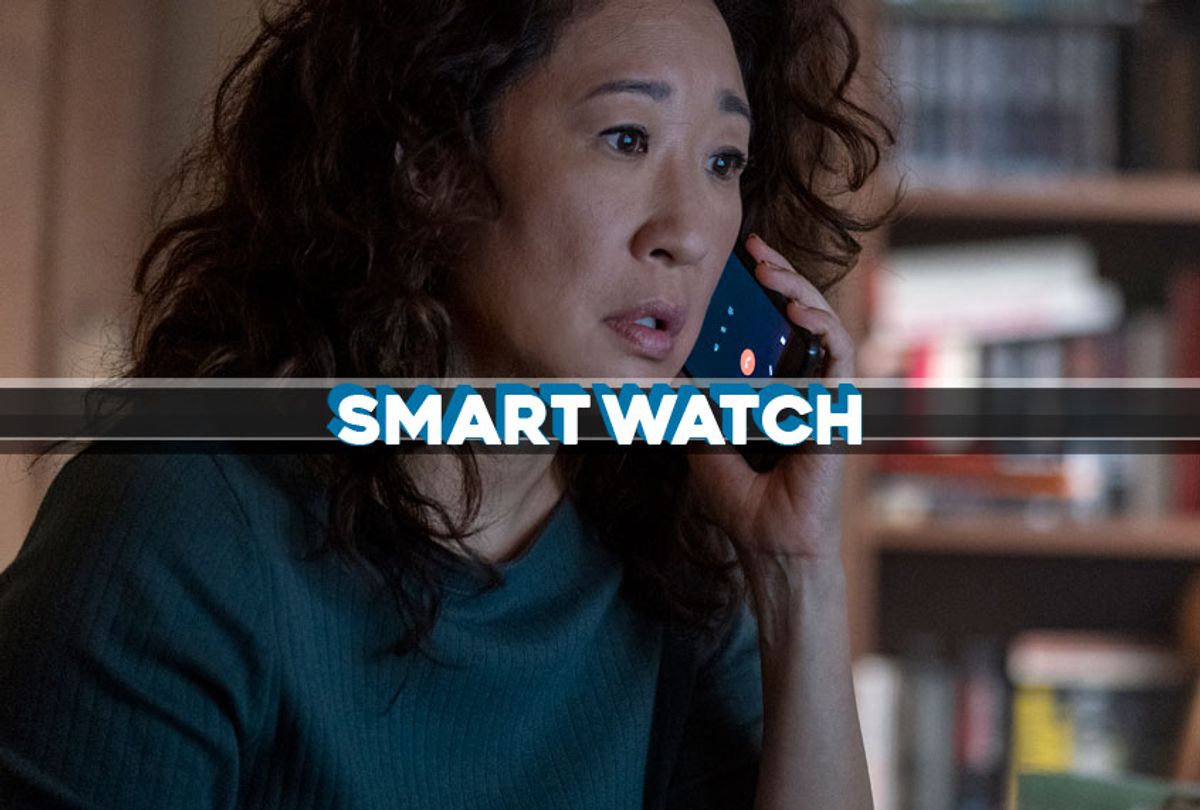 What’s a little gut-stab between girlfriends? This is me being facetious, of course, because international assassin Villanelle (Jodie Comer) and MI5 agent Eve Polastri (Sandra Oh) aren’t in a relationship. Technically.

In a real way they are fascinated, obsessed, and somewhat unnaturally drawn on one another, moths to each other's fire. But as season 2 of “Killing Eve” kicks off, the strange love and bloodlust these women have for one another appears to be taking a new shape, as a person would expect when what initially looked like a carnal consummation of their bizarre obsession transforms, suddenly and bloodily, into violence.

Between the first and second seasons of this series the popularity of “Killing Eve” has blasted off, thanks to Oh’s multiple award nominations and Golden Globe win for Best Actress in a TV drama. And her performance is just as taut, frantic and comedically solid in the opening pair of episodes sent to critics for review as it was last season.

Having said that, if there’s any justice in the world these new episodes should also bring much deserved attention to Comer’s performance as Villanelle. Her fashion-obsessed killer played the role of the childlike gamine in season 1 but in these new episodes radiates the internalized effects of the wounds to her midriff and her heart in shocking ways.

Comer makes her even more chilly and tosses in an additional dose of psychotic snarl in these new episodes while maintaining Villanelle’s off-putting yet entrancing sweetness. This lends a new urgency to the next act in this spy-hunts-assassin game, which I won’t spoil beyond stating the obvious: if you’re going to knife a psychopath, it’s probably wise to finish the job.

“Killing Eve” is not a story about good choices, but a tale of compulsion – one that its very busy creator, Phoebe Waller-Bridge, has passed into the hands of new showrunner Emerald Fennell in order to helm other projects, including a second season of “Fleabag” for Amazon.

Ordinarily that might give enamored viewers reason worry about a decline in quality, but Fennell and Waller-Bridge are apparently close friends in real life. And the fact that the humor and tension flows seamlessly from the first season finale into the second season premiere, which picks up mere moments after Eve’s failed coup de grace, is a good sign that Fennell is up to the job of keeping the deadly mission on task.

And it is still very much a thriller with a feminist bent, on display in the most unexpected moments. While she’s in the hospital, a boy asks Villanelle what happened to her, and when she tells him she was stabbed, he expresses shock – but even more when she reveals her assailant was a woman.

"Women don't stab," the youngster says with all the confidence of a kid who has been taught early where the boundaries of gender exist. Villanelle, too, is aware of how early those lessons are hardwired into people, and uses those expectations to her advantage. Instead of correcting the boy, she simply agrees. "I know," she replies, and with a somewhat dreamy, slightly crazed look in her eye, adds, "It surprised me, too."

When it comes to affairs of the heart, you never can tell what will happen. From what I’ve seen, however, there’s no reason for the audience to break things off now.

“A Discovery of Witches,” premieres Sunday at 9 p.m., AMC and BBC America

Proving we have yet to hit our saturation point when it comes to sorcerer tales, this U.K. series was so successful in its AMC streaming services premiere that the network is launching it in broadcast on the heels of the “Killing Eve” season premiere.

This is another literary adaptation about supernatural adventures in the real world, this time from author Deborah Harkness, and starring a veritable all-star line-up of British and Aussie Actors We Like Watching on TV, including Matthew Goode, Teresa Palmer, Alex Kingston and Owen Teale. And it’s not just witch adventures to be featured in this weird love story, either. This world also has demons and vampires, along with a whole lot of lovely architecture. It’s one of two witch-related debuts as of late; new episodes of “Chilling Adventures of Sabrina” dropped on Netflix Friday.

Richard Wright’s classic novel has been adapted as a motion picture twice — once in 1951, and again in 1986, and with Oprah Winfrey in the cast. Neither captures the singular power of the 1940 literary tragedy showing the fall of Bigger Thomas, a young man growing up in grinding poverty who Wright posits is destined to be consumed by violence and criminality. Wright’s novel was seen as controversial for its time, and would eventually be reappraised by James Baldwin, who took issue with Bigger’s stereotypical crimes that spur the plot through its three parts: Fear, Flight and Fate.

Visual artist Rashid Johnson takes Baldwin’s critiques into account in this new adaptation, using a screenplay by Pulitzer Prize-winning playwright Suzan-Lori Parks and starring Ashton Sanders (“Moonlight”) as a modern version of Bigger, a young man who dresses in the armor of punk rock — hair dyed green, spiked collar around his neck, leather jacket covered in slogans — in part as a cover for his aimlessness.

Bigger works as a bike messenger and courts Bessie (Kiki Layne), but can’t help hide his wandering attention. But when the man dating Bigger’s widowed mother (Sanaa Lathan) gets him hired as the driver for rich businessman Will Dalton (Bill Camp), he takes his opportunity seriously.

His ignited ambitious fails to take into account the recklessness of Dalton’s daughter Mary (Margaret Qualley), a party girl who is also trying on rebellion as a fashion statement. Mary is fascinated by Bigger, an African-American man close to her age — not as a peer but as an accessory and guide into places she would not dare venture alone.

If you know what happens in the novel, you know this friendship goes badly. Johnson and Parks adopt a different tactic than Wright, excising elements of the story that affirm some of the worst tropes about black rage and violence and changing the ending to one more fitting of 2019.

Driving this new “Native Son” is Johnson’s stunning collage of images and references, subtle but noticeable to the greats of African-American literature. The opening image frames a shot of Ralph Ellison’s “Invisible Man” on Bigger’s bed, right next to a gun. Much later a voiceover quotes W.E.B. DuBois’ observations about double consciousness — a term that originated in an essay titled “The Strivings of the Negro People.”

Sanders cloaks his performance in this idea above all, presenting Bigger not as an out-of-control anti-hero but a young man desperately attempting to figure out where he fits in the world.  And if Johnson loads “Native Son” with symbolic imagery that has multiple meanings, Sanders filters that meaning into every expression and every line of dialogue.

For example, the young rebel wears a t-shirt from the Detroit hardcore band Death, and is seen yearning for a rare pressing of a 7-inch vinyl single of the band hanging on the wall of his favorite music store. There’s the obvious portent in that word, of course.

There’s also the inference of what the band itself stands for: Death never received the mainstream exposure of Motor City brethren like The Stooges, because in 1974, the band refused Clive Davis’ request to change its name into something with more commercial appeal. Death aspired to greatness but smashed against the reality of the world’s fears — just like Bigger.

Such small ribbons of history make this adaptation of “Native Son” more than a success — it’s transcendent.

Lena Waithe’s series built a vision of Chicago in its first season that was poignant, funny, bright and tragic, often in a single hour. This new season picks up where the first departed, with new showrunner Ayanna Floyd Davis, who lived in the city, replacing Elwood Reid.

And through her we live these characters struggling and striving, and watch ambitions realized and painfully thwarted in ways that boldly expand on the stories established in the first season. In part this seems to be an effort to compensate for a few departures, primarily (and noticeably) Sonja Sohn.

But this gives room for other performances to stretch and grow, mainly Jason Mitchell’s entrepreneurial chef Brandon and Tiffany Boone as his supportive girlfriend Jerrika, along with Ntare Guma Mbaho Mwine’s Ronnie, an addict who confesses to the murder of Brandon’s younger brother and finds solace in the structure of prison.

Once again Alex Hibbert’s Kevin and his fellow middle schoolers provide the bulk of the comic relief, which is necessary, given season 2’s quiet but ever-creeping adversary, gentrification. “The Chi” draws its power from methodically examining the separate and intertwined relationships in the community it features, and this produces a few hours that move more slowly than others. But the first hour of the new season had enough meat to it to prove this series retains its worth.