FX's "Fosse/Verdon" dances, after a little warm up 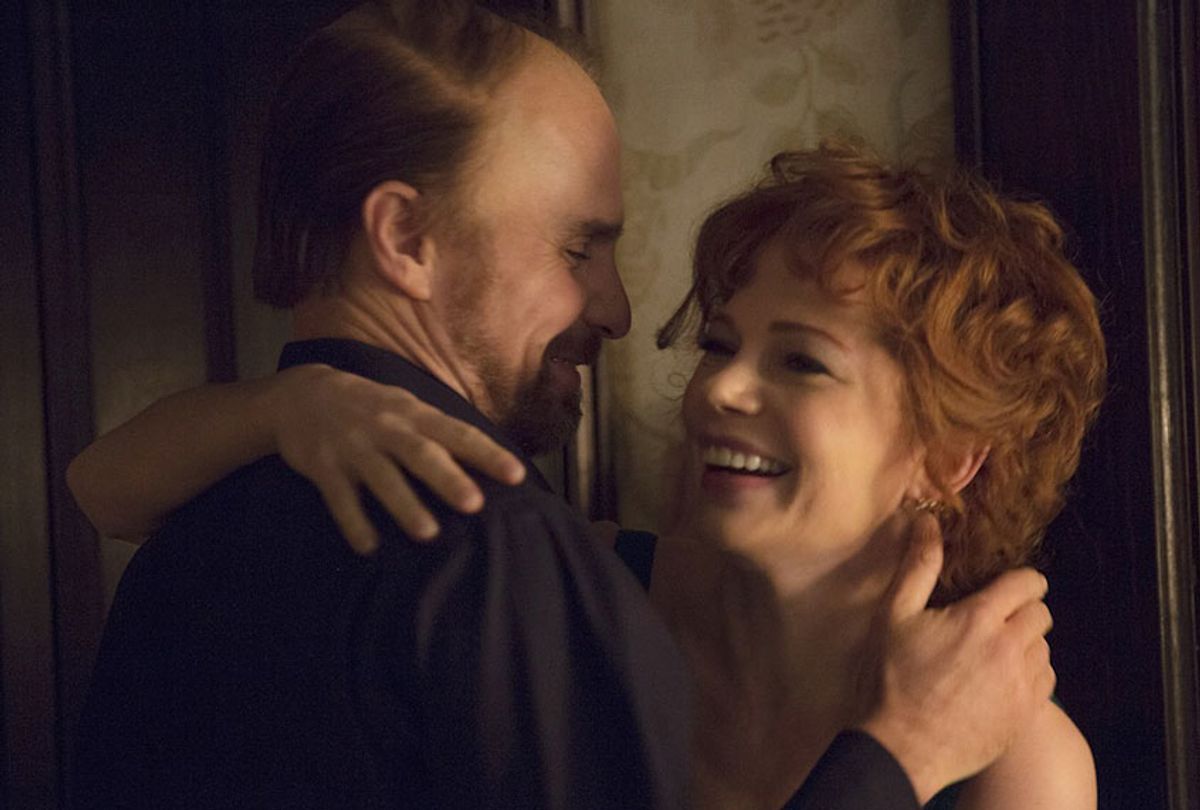 Minding the count is everything in choreography. The trick is to make sure the audience doesn’t notice unless, of course, noticing is the point.

“Fosse/Verdon,” FX’s new limited series premiering Tuesday at 10 p.m., is an eyeful of syncopated rhythm, a singular sensation, all pluck and tap dancing and juxtaposed mood and memory. Broadway fans will drink it in and get high on it like a post-show highball, I suspect. Viewers searching for the next great performance out of Michelle Williams, a TV star who became an A-list movie actress, will find her portrayal of Gwen Verdon to be nothing short of glorious.

Showbiz devotees may appreciate the symmetry in Sam Rockwell’s performance of Bob Fosse, in the sense that the leads bring out the best in one another when they’re together, but when we see Williams apart from her co-star, her glow is magnified.

Her effusive expression in the third episode as she takes in the applause for her star-making turn in “Can-Can” halts the air in the room, and it’s made only more magnificent by a smash cut to a close-up of Gwen remembering her glory days much later in life, only with exasperation at what it has become.

Even so, it takes “Fosse/Verdon” time to warm up and find its groove, due in part to its obligatory swim through its subject’s mood swings, controlling nature and impulsive behavior — you know, all the hallmarks of The Great and Tortured Artist.

There’s a reason that stereotype exists, as much as there is truth in this interpretation of Fosse and Verdon’s rendition of it. The relationship between the gifted dancer Verdon and Fosse, the legendary choreographer of such Broadway standards as “Damn Yankees” and “Sweet Charity,” was one of artistic purpose over the long term. By shuffling between different eras in their lives, it compellingly paints twin portraits of competitive, driven personalities whose talents feed one another even as their egos clash.

But this is a predictable route, even by the standards of one of the industry’s least conventional marriages, and it results in a stilted feel for those first hours, which look stunning but leave the viewer too aware of their steps and blocking.

Can we be honest, though? “Fosse/Verdon,” though it thrives through its performances, comes up short because it has the unfortunate task of being the first miniseries to step into the springtime contention field after Ryan Murphy left FX. Murphy laid the groundwork for what the network’s signature limited series should look like, particularly in how the individual stories of their characters are told.

Both chapters of “American Crime Story” made the humanity behind the names more important than their celebrity or the reasons they became famous. “Feud: Bette and Joan” dangled the promise of dish about two Hollywood icons but immediately established their earthly fragility. In comparison the opening hours of “Fosse/Verdon” are so invested in making the scenes and dialogue dance that the show forgets to let the viewers know what kind of people Fosse and Verdon are, and give us reasons to care about them beyond the details of their filmographies.

Nevertheless, “Fosse/Verdon” deserves its status as a prestige effort and anyone who wants to see an inventive work tailored to win awards will be amply satisfied. If it falls short of flawlessness, that’s not due to a lack of effort by executive producers Thomas Kail (who directed three of the five episodes provided for review), Steven Levenson or Joel Fields (“The Americans”), who wrote for the series.

This is a story built on larger-than-life performances that expand and contract to fit the various stages upon which they’re set, and in the initial hours, that stage is the film version of “Cabaret” and its painful birthing process, made even more difficult by the blow-ups in the romance between the title characters.

In later episodes the scenes depicting the resilience of Fosse and Verdon’s partnership, which remained intact despite their failed marriage, provide some of the miniseries' most fertile material.  But the drama is at its best when the focus cuts to Verdon, a woman who merged her genius to that of another, only to find herself stuck in a life where she can never stop acting.

Behind the curtain of biography, betrayal and striving, “Fosse/Verdon” undresses into a story about haunted people, a pair of artists inexorably pushed by past abuses and the fear of failure they produced. For Fosse this manifests in stressful moments as a frenetic tapping, the soundtrack of punishing rehearsals that pushed him to the edge of his abilities when he was a boy.

These moments provide the viewer with some understanding as to why the choreographer could never have enough — he couldn’t just work behind the scenes of a show, he pushed to star in it. He couldn’t be satisfied with the success of “Cabaret,” he could only see what he could have done differently.

And in Verdon's performance skills, he saw the realization of the best of his work, which the series suggests only increases his resentment. We know now that the industry and public remember Fosse far more than Verdon. As he aged, he was regarded as a top choreographer and visionary, granted carte blanche and showered with Tonys and Emmys and Oscar nominations, winning one of the latter.

Verdon had to fight for roles and recognition during the same era of her life; never mind all the Tony awards and effort expended to make Fosse look good.

By this point in the series the emergent theme is that of imbalance, with Fosse enjoying all of the acclaim and none of the salubrious, life-improving elements of partnership, and Verdon carrying the burden of caring for their personal lives. (Their daughter Nicole Fosse, seen in the series as the juvenile, ping-ponged witness to her parent’s travails, serves as the series’ creative consultant and co-executive producer.) Both in their own ways are shown settling for less than they want, the only fate for people who can’t stop wanting more.

Maybe that level of storytelling is enough for Broadway, what with all the moves and beats leading up to the inevitable, the moment Fosse shuffles off into eternity, a countdown established in the series premiere. The average viewer unfamiliar with these stars and their joined and dueling legacies might struggle to find a way into the soul of “Fosse/Verdon,” though. But what can I say? Not everyone can dance or wants to. Those who can are advised to be patient and find the beat of this story, if only to bask in the performance of an outstanding actress due for a little more recognition.