When it comes to table manners royalty should be your benchmark 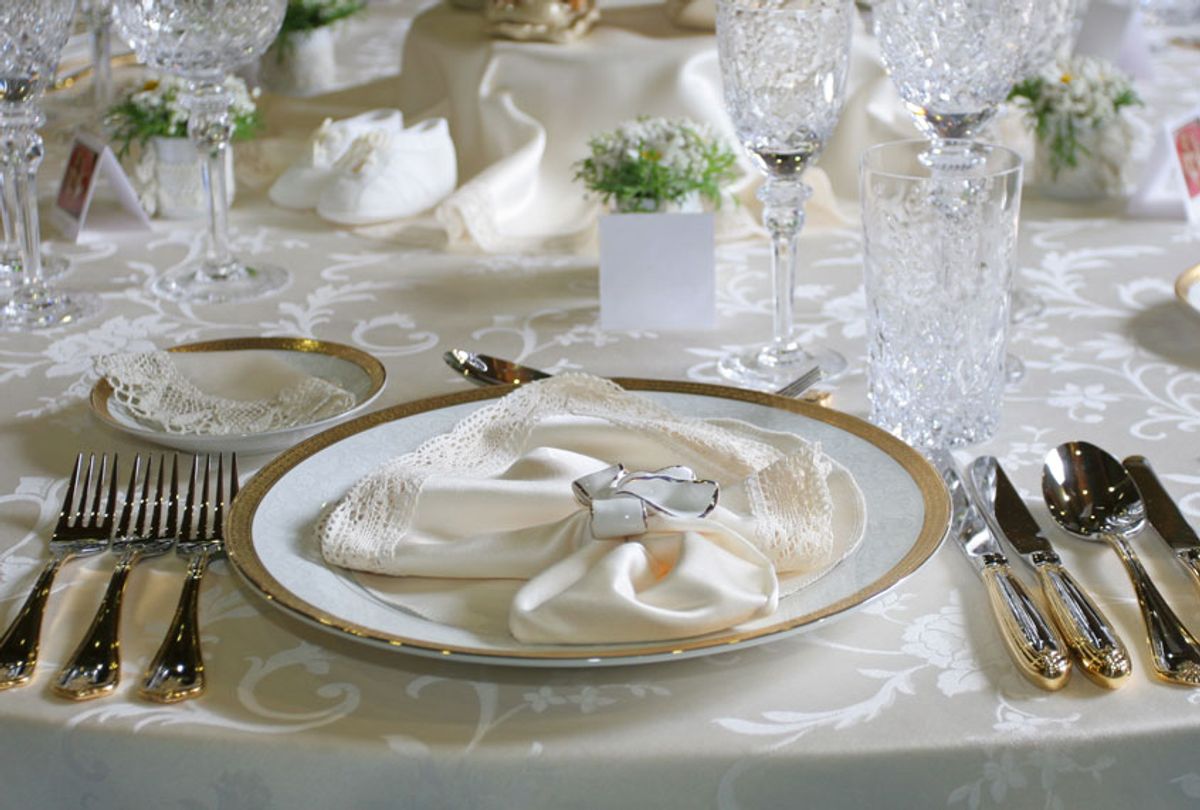 One of the greatest things about being human is table manners. Think about a dog. Nothing is more unsatisfactory than handing your dog a tasty treat only to have it disappear down their gullet without even a moment of savoring the jus clinging to that succulent gristly end of beef. While we might all toil under the notion of unconditional love, there is no pleasure in watching a dog eat, the maniacal inhalation of kibble and orts. I once saw my dog eat a snake, and yes, I am completely traumatized. While we're on dogs, whoever came up with that unconditional jazz?  It's entirely conditional. You feed me, walk me, give me shelter and then maybe I'll let you throw yourself on top of me for kisses though I'd rather be sleeping.

Had dogs table manners they might be the masters. I would even go so far as to say good table manners can change your life. Recently, I've been making a study of this incredible woman called Daisy Bates. Born an Irish scamp 1859, she should have spent her life in some peat-choked Irish village battered down by poverty and the innate unfairness of life, not to mention the British. (Had to throw that in) But Daisy was gifted with a couple of things that allowed her to reinvent herself. First; she had a crackerjack faculty for languages. Greedy girl, she gathered up whatever the nuns were throwing down, French, Latin, Greek. Next; she had the wherewithal to get hold of a book called, Debrett's Peerage of England, Scotland and Ireland. She learned the names of all those Lords and Ladies, Dukes and Duchesses so one day in the future she could pass herself off as one. And finally, she picked up a knife and fork. I'm not saying that poor families didn't use utensils, but the finer points of table manners were a low priority compared to scrounging up enough food to feed kith and kin. But Daisy, who happened to be in a convent school that had both state-sponsored students and the children of the wealthy, though they never mixed, watched the toffs like a hawk, noting every little thing about their comportment.

By the time Daisy was of age, she was ready to slough off the shackles of her birth and go out and be, well, in her life she was many things in many places, governess, journalist, drover, and finally one of the world's first female ethnographers spending the last thirty years of her life living in the Australian Outback in a tent, sustaining herself on dried biscuits and porridge. Ok, not the ending you were expecting, but her work with the aboriginals made her famous, so much so, that when the Prince of Wales toured Australia after WWI to thank the Aussies for their contributions to the war effort — Oh Gallipoli — he stopped and visited Daisy. And, you can bet she had no trouble being at table with royalty.

When it comes to table manners, royalty should be your benchmark.

It certainly was mine when I was a girl growing up in Canada. My father, and I feel pretty confident that anyone with English parents of a certain age, it was the father who was in charge of making sure their offspring could sup with the Queen. Cloth napkin in lap, fork in left hand, knife in right. Food pushed gently onto the back of tines. No scraping, scooping, stuffing. He went a little overboard, demanding also that we chew our food thirty-two times before swallowing. But what might be good for the digestive tract isn't great for the palate, leaching food of all its flavor, so I regularly defied him on that score. But thanks to his tutelage should the Queen feel so inclined to dine with me, no problem.

But I get that Americans need to do things their own way. Probably the second you won the War of Independence the first order of business was to make sure no one was ever mistaken for a Brit and what quicker way than to come up with a different table etiquette. "My Fellow American's, from now on, you cut your food, put your knife down, switch your fork to the other hand and proceed! Bon Appetit!" You still liked the French then.

Other than it being a few too many steps to get your food to your mouth, there's nothing wrong with that. (You're probably thinking, who the hell is she to judge? Good point. But I'm a snob, so I do get to judge).

When I moved to New York as luck would have it, one of my first jobs was as a waitress at O’Neal's Baloon. It's defunct now, but back in the day it was the place to be seen. I waited on everyone from Jackie Onassis (incredibly polite) to Paul Newman (dared you to look into those eyes of his) to Rudolph Nureyev (never, ever, had I seen someone so beautiful, and he was dying!) Top flight people and they had the manners to go with it.

But O'Neal's was where I was when I saw something that, well, scarred me for life. I had made friends with another waitress, lovely girl, raven black hair, and one day she came in all excited. Her cousin, a doctor, was going to marry Mary Tyler Moore and she was going to the wedding. Usually, our staff dinners were just burgers, the best thing O'Neal's made, so I had never seen her use a knife and fork. But to celebrate she decided for dinner she would order and pay for a steak.  When her meal arrived, I can hardly even write this, she picked up her fork, no she wrapped her entire fist around the handle of the fork, and impaled the meat. She then took up her knife and with a horrible sawing motion hacked her poor steak to pieces. That done, fork still held at the ready to plunge into someone’s heart, she stabbed at the pieces, popping one after another into her mouth.

If I was Mary Tyler Moore and some member of my new family ate like that at my wedding, I would have immediately annulled the whole thing.

And, it took every fibre of my being not to cry out, "Good god, woman, it's a meal not roadkill!"

After living in America for the last forty years, I've grown to love this country beyond measure but, damn, that holding a fork in one’s fist, it breaks my heart, kills my appetite — hard thing to do — and makes me wonder what if . . . King and country had won the day!

Dinner fit for a Queen

As soon as you get home from the butcher with the chops, remove from paper, liberally rub with a sliced side of the clove of garlic, then rub in olive oil, sprinkle on rosemary and shower with salt and white pepper.

Let stand at least an hour, but the longer the better.

Wash and remove leaves from stem, finely chop. Place in a bowl and add vinegar and sugar. Stir. Add one or two tablespoons boiling water, this blooms the mint. Adjust for taste. Then let sit again for a least an 1/2 hour or longer. Taste again, add more vinegar or sugar if needed.

Heat a cast iron pan on medium high heat. When hot, but not smoking, lay the chops in on the fat cap edge until some fat is rendered. Once there’s enough fat, lay the chops down. Cook until desired doneness. Medium rare is traditional but some people liked their lamb a bit more cooked while the French like it blood rare.