Hawaii could be first state to ban plastics in restaurants 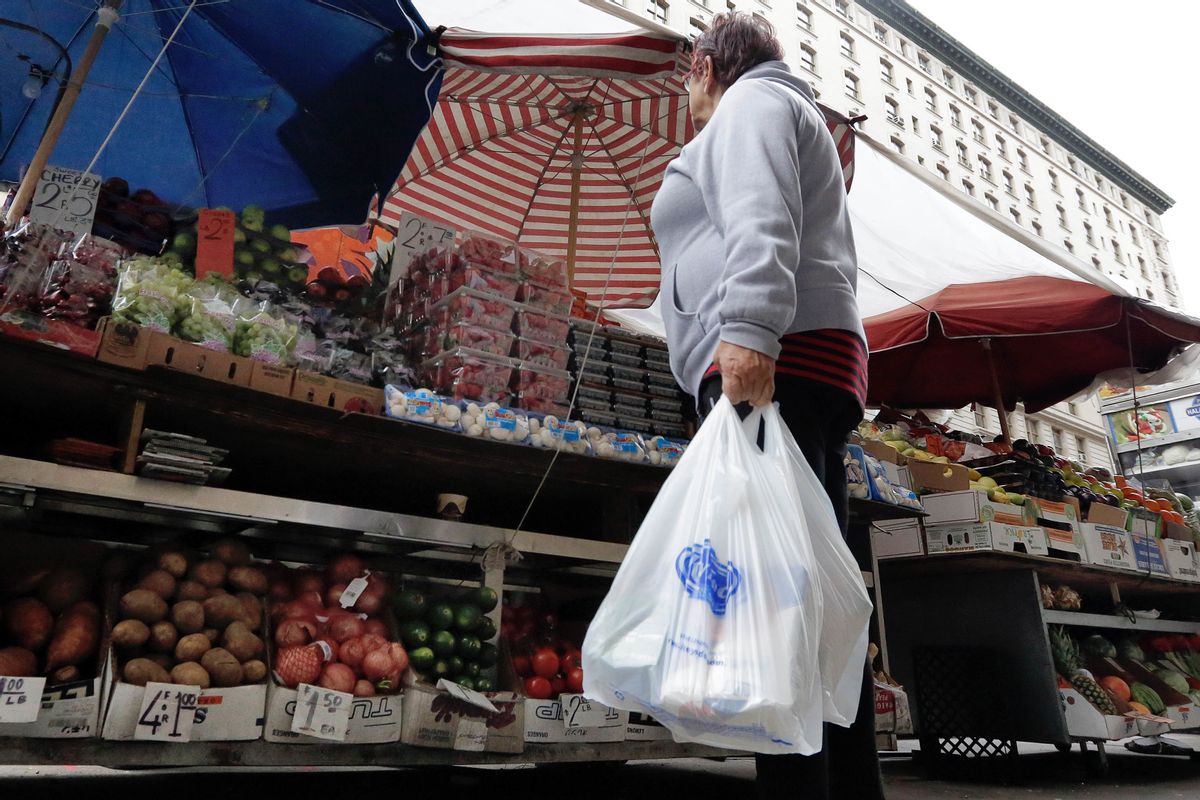 A woman carrying her supermarket purchase in plastic bags stops at a produce vendor on New York's Upper West Side, Thursday, May 5, 2016. (AP Photo/Richard Drew) (AP)
--

As dozens of cities around the U.S. ban plastic straws and other single-use plastics, one of the greenest states in the country is considering a near total ban statewide on plastic and styrofoam.

The Hawaii state legislature has introduced two separate bills that would impact fast-food and full-service restaurants — one dealing with plastic, the other with styrofoam. Despite broad public support, businesses and the state’s food industry association oppose the change, citing higher costs for more sustainable alternatives.

In addition to higher costs for food establishments, questions remain about how the state would deal with bans on plastic garbage bags, or how water bottles would be distributed in the event of a natural disaster.

Hawaii’s state Senate has passed both bills, but they still have to get through several House committees and the full House before heading to the governor.

Senate Bill 522 prohibits the use of plastic bottles, utensils, stirring sticks, polystyrene foam containers, and straws by state agencies as of July 1, 2021, and by businesses selling food and beverages by the following year, according to language in the bill. It also bans the distribution or sale of plastic bags after July 1, 2023, and the same for single-use plastic beverage containers after July 1, 2025.

If passed, the bill would also create a working group to make recommendations for eliminating single-use plastic.

“We have this reputation of setting the example for the world to follow, and that’s what we’re trying to do here,” state Sen. Mike Gabbard (D), one of the bill’s sponsors, said to the Senate. “Our state can once again take the lead in protecting our environment.”

A 2015 study by Jenna Jambeck, an engineering professor at the University of Georgia, found alarming numbers relating to global plastic waste.

“We estimate that people added 8 million metric tons — and a metric ton is 1000 kilograms, so that’s 8.8 million American tons — of plastic to the ocean in 2010,” Jambeck told a panel at the American Association for the Advancement of Science. “And it can get worse. If we assume a business-as-usual projection with growing populations, increasing plastic consumption and increased waste generation, by 2025, this number doubles.”

Last month, a dead whale washed up in the Philippines with over 88 pounds of plastic in its body.

Marine biologists and volunteers from the D’Bone Collector Museum in Davao City, on the Philippine island of Mindanao, said they found “40 kilo[gram]s of plastic bags, including 16 rice sacks … four banana plantation style bags and multiple shopping bags,” and called it “the most plastic we have ever seen in a whale.”

The Center for Biological Diversity says that clusters of plastic, made into giant floating islands by tides make up about 40 percent of the world’s ocean surfaces, which affect over 700 species of animals, including humans.

“Fish in the North Pacific ingest 12,000 to 24,000 tons of plastic each year, which can cause intestinal injury and death and transfers plastic up the food chain to bigger fish, marine mammals and human seafood eaters,” the organization wrote on their website.

The Hawaii Senate bill was heard in the state’s House Finance Committee on Friday, March 29, 2019, which recommended that the measure be passed unamended. The bill has gone through every House and Senate committee and will go to the conference committee, where members of the state House and Senate discuss the bill before the final vote. A date for the next hearing has not been set as of publication time, according to the Senate clerk’s office.