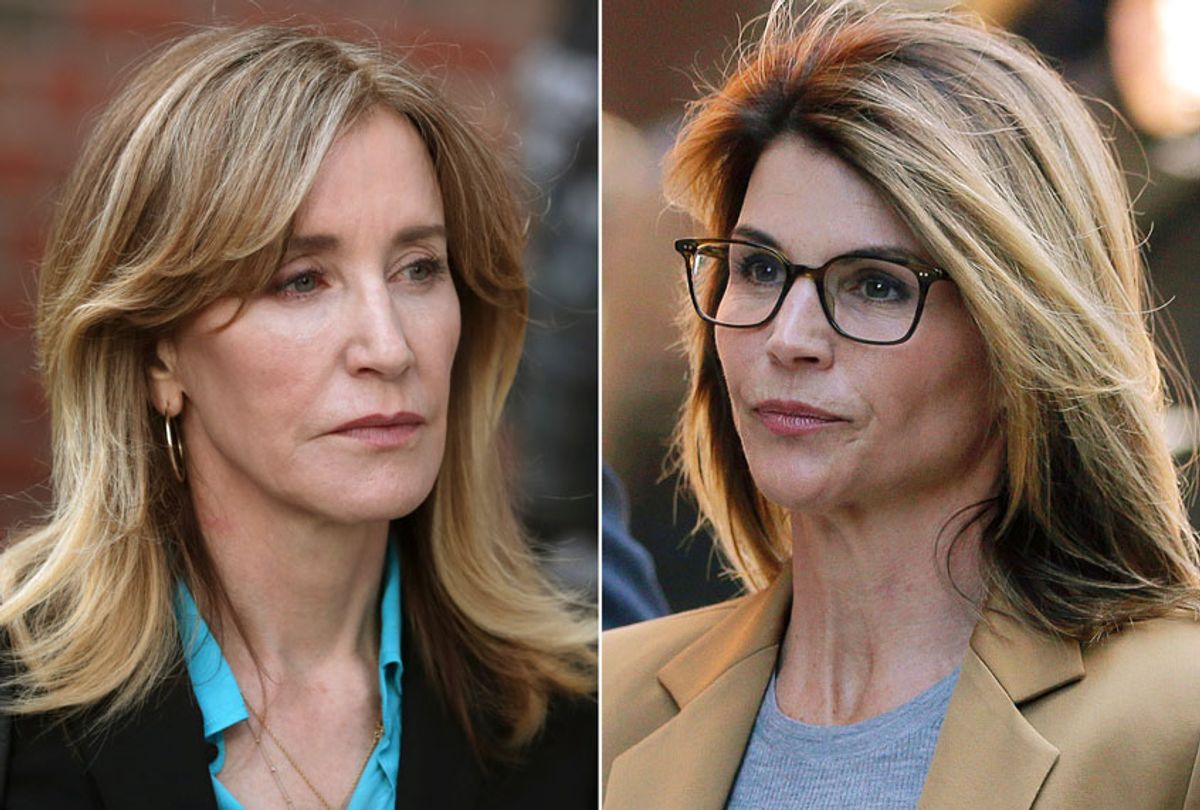 Felicity Huffman and Lori Loughlin outside of federal court in Boston on April 3, 2019, where they face charges in a nationwide college admissions bribery scandal. (AP/Charles Krupa/Steven Senne)
--

Last week in Boston, actress Lori Loughlin, among others indicted in the largest college admissions scam bust, made their first appearances in court. But Loughlin was all smiles as she glided past reporters and fans, who screamed questions and praises at "Aunt Becky" from "Full House." Grinning from ear to ear, Loughlin waved to energetic bystanders; she laughed and engaged with the crowd, signing autographs like this was a red carpet, rather than a referendum on the ways she and her husband, the designer Mossimo Giannulli, allegedly bribed and cheated to get both their daughters into the University of Southern California as bogus crew recruits. In her caramel-colored suit and hip glasses, Loughlin appeared carefree, in the way that only a wealthy white women entering a courtroom in the United States's criminal justice system could.

Loughlin's demeanor and actions have diverged substantially from fellow indicted actress Felicity Huffman. Federal prosecutors said that Huffman, as well as 12 of the other parents indicted in the scandal, would plead guilty to a single count of conspiracy to commit mail fraud and honest service mail fraud. Prosecutors said one coach would also plead guilty, and that dates for their formal pleas in court have not yet been set.

In a lengthy statement announcing her guilty plea, Huffman attempted to take full responsibility for paying $15,000 to facilitate cheating on her daughter's SAT test.

"I am in full acceptance of my guilt, and with deep regret and shame over what I have done, I accept full responsibility for my actions and will accept the consequences that stem from those actions," Huffman wrote in a statement. "I am ashamed of the pain I have caused my daughter, my family, my friends, my colleagues and the educational community. I want to apologize to them and, especially, I want to apologize to the students who work hard every day to get into college, and to their parents who make tremendous sacrifices to support their children and do so honestly."

She added that her daughter did not know about the bribe or the cheating on her test, in which prosecutors say a test proctor corrected her answers after she took it. Ultimately, Huffman said, she "betrayed" her daughter with her actions. "This transgression toward her and the public I will carry for the rest of my life. My desire to help my daughter is no excuse to break the law or engage in dishonesty," Huffman's statement concluded.

For Loughlin, Giannulli and 14 other parents who had been holding out on whether or not they will plead guilty, prosecutors brought new charges of money laundering against them on Tuesday. In total, 50 people have been charged in the sweeping investigation, in which wealthy parents are accused of paying orchestrator William Singer to doctor test scores or to bribe athletic coaches to recruit their children as student athletes under false pretenses.

It appears that prosecutors have drummed up more charges as they are hoping to raise pressure for plea deals, though some parents have vowed to fight. Lawyers for Silicon Valley investor William McGlashan, who was indicted alongside other parents Tuesday, say they "look forward to presenting his side of the story." McGlashan is accused of paying Singer $50,000 for test cheating and for agreeing to pay another $250,000 to get his son into the University of Southern California as a football recruit. Prosecutors say, according to the New York Times, that McGlashan did not end up following through with the latter bribe. "The prosecutor's case against Mr. McGlashan is deeply flawed and ignores important exculpatory facts," one of his lawyers said.

In another development, according to a report from People, Loughlin's daughter, Instagram influencer and YouTuber Olivia Jade, was at least somewhat aware of the alleged illegal machinations to gain her admission into USC. Olivia, who admitted her indifference to college in one of her YouTube videos, reportedly "blames her parents for everything," an unnamed source told People. "She would have never gone along with it if she thought this would happen. Her thing is that she trusted her parents."

"Olivia is still distraught and embarrassed. She hasn't been home much," the source added. "She is very angry with her parents. She just wants to figure out how she can rebuild her brand."

While Olivia Jade and her sister Isabella have reportedly not been attending classes since the scandal broke, USC is not letting them withdraw. "USC has placed holds on the accounts of students who may be associated with the alleged admissions scheme," the college said in a statement to US Weekly. "This prevents the students from registering for classes (until they have agreed to participate in the review of their case), withdrawing from the university, or acquiring transcripts while their cases are under review. Among many factors investigators could consider in reviewing each case are any developments in the criminal cases, including plea deals by parents. Following these case-by-case reviews, we will take the proper action related to each student's status, up to revoking admission or expulsion."

In the meantime, Olivia Jade has been able to move forward with her beauty trademark application, following issues with a lack of punctuation. As the source told People, "She was honest about that she didn't really care about school. But her business, she was always very serious about. She most certainly will find a way to start over again. She isn't someone that gives up easily."