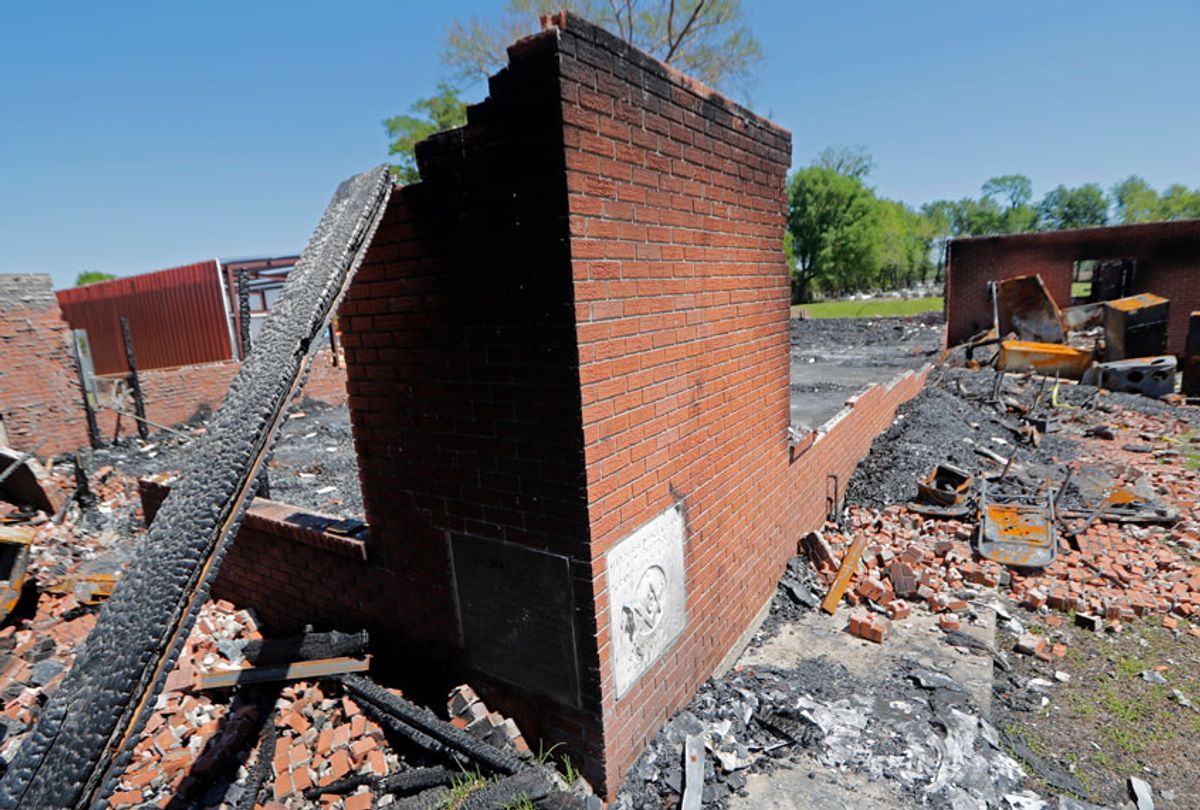 The burnt ruins of the St. Mary Baptist Church, one of three that recently burned down in St. Landry Parish, are seen in Port Barre, La., Wednesday, April 10, 2019. (AP/Gerald Herbert)
--

The son of a Louisiana sheriff’s deputy was arrested in connection to fires that destroyed three historically black churches over 10 days.

Holden Matthews, 21, was arrested Wednesday on three counts of arson on religious buildings, KATC reported. Matthews, the son of a St. Landry Parish deputy, faces 15 years in prison for each charge.

State Fire Marshal Butch Browning said at a news conference Thursday that he was “confident” that “we have the person responsible for these tragic crimes.”

Browning said that investigators are looking into a possible “hate motive” and Matthews’ ties to black metal music.

“Right now we are just making sure we gather all the facts,” said FBI agent Eric Rommal, adding that federal investigators are also looking at whether the arson attacks were “bias-motivated.”

Matthews’ Facebook page showed a heavy interest in Norwegian black metal music that may have had implied neo-Nazi leanings, according to The Daily Beast.

Matthews commented on memes about former neo-Nazi musician Varg Vikernes, who was convicted of murder and burning churches in Norway.

He also frequented pagan pages. On one page he posted a photo of a gun and a knife with the caption, “I carry this.....maybe not legally but I only truly follow the law of Odin..... which says as you said, arm yourself...... Odins advice> modern law,” referring to the pagan Norse god.

According to the Daily Beast, Matthews frequented pages that “can be popular with neo-Nazis” and, though one of the pages specifically forbade “nazi stuff,” Matthews “appeared aware of the religion's white supremacist associations.”

In a comment on a drawing of a pagan figure with a swastika-like design on his belt, Matthews wrote, “well yea the belt gives him extra strength and power.....white power lmao jk jk I had to.”

Two of Matthews’ friends told BuzzFeed News that he was a “nice, mild-mannered, level-headed” person who was obsessed with Norwegian black metal and was trying to make a name for himself in online circles.

They described him as a “marshmallow” but added that he was “inspired” by “Lords of Chaos,” a film about Vikernes’ murder, arson and racial hate.

“Most people in our world adamantly did not like the movie and what it stood for and how it portrayed our culture,” Matthews’ friend Nygyl Brynn Blackwolf told BuzzFeed. “But Holden liked it. If he did this, he was inspired by that movie."

Browning said Thursday that investigators are looking into Matthews’ obsession with black metal “and its associated history with church burnings in other parts of the world.”

Louisiana Gov. John Bel Edwards said at a news conference Thursday that nothing can justify Matthews’ attacks on the churches.

"I don't know what this young man's motive was, I don't know what was in his heart, but I can say it cannot be justified or rationalized," he said. "These were evil acts. But let me be clear about this, hate is not a Louisiana value."

NAACP president Derrick Johnson said the fires were an act of “domestic terrorism.”

“The spike in church burnings in the Southern states is a reflection of emboldened racial rhetoric and tension spreading across the country," he said in a statement. “But this is nothing new. For decades, African-American churches have served as the epicenter of survival and a symbol of hope for many in the African-American community. As a consequence, these houses of faith have historically been targets of violence.”