Everything about the anti-abortion indie "Unplanned" is dishonest: Its story, its agenda and its marketing strategy 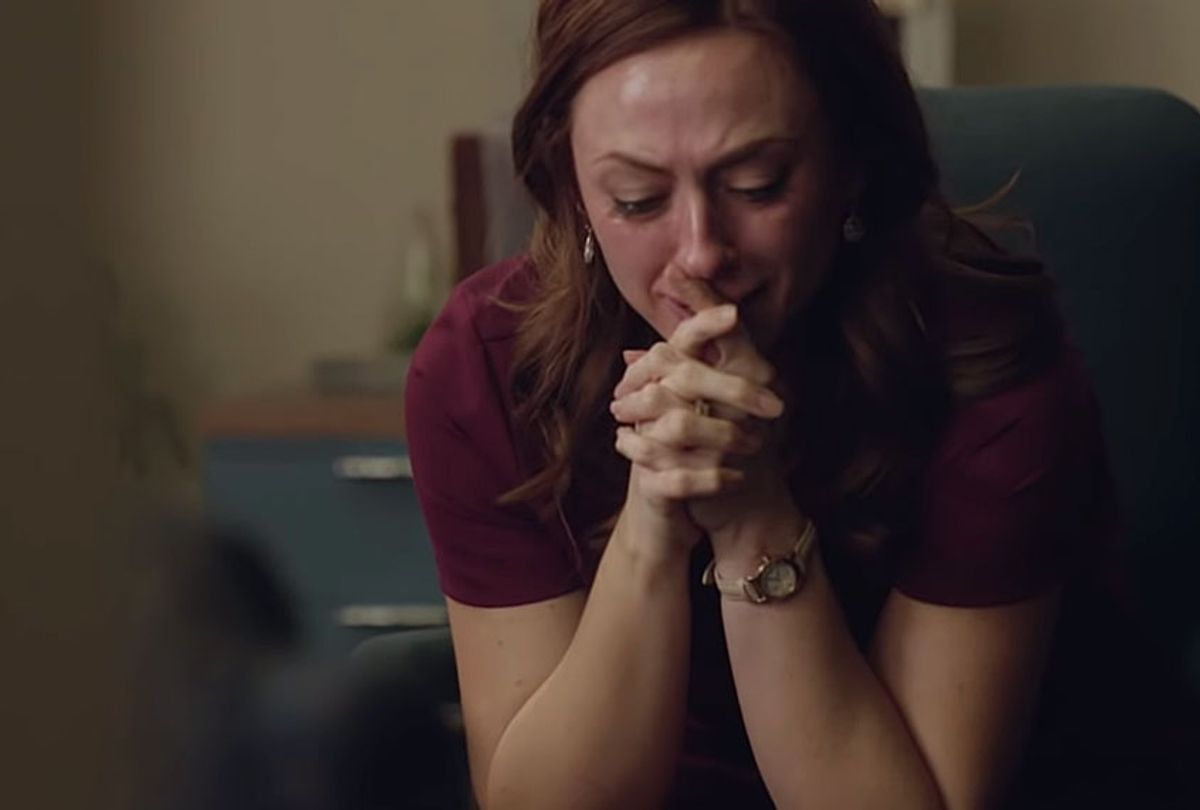 With all the chaos in the hearing rooms on Capitol Hill this week — from Attorney General Bill Barr's cover-up-disguised-as-testimony to Rep. Ted Lieu, D-Calif., reminding a witness who denied the existence of white nationalism of her past comments about Adolf Hitler — you might have missed that Sen. Ted Cruz used the Senate hearing process to market a gory anti-choice propaganda film by hyping false claims that it was being "censored." For the Fox News audience, on the other hand, the supposed liberal campaign against "Unplanned" was one of the most important stories of the week.

"Unplanned," which has earned about $13.7 million in limited release over the last two weeks -- more than twice what it reportedly cost to make -- is a fascinating bit of cultural ephemera, but not because of anything that's actually in the movie. (To be clear, I haven't seen it and this isn't a movie review.) From the subject matter to the script to the marketing, "Unplanned" is infused with right-wing grift, a pure exercise in the craft of exploiting reactionary impulses to separate fools not just from their money, but from common sense.

The grift starts with the subject matter, the supposedly true story of a woman named Abby Johnson, an anti-choice activist who manages to stand out for her shadiness, even in a field that's stuffed to the gills with charlatans.

Without batting an eyelash, Johnson will claim she heard an abortion doctor say, "Children should be allowed to be killed by their parents up to 24 months after birth," a lie so transparent that it's difficult to imagine any of her followers actually believe it. Maybe they pretend to believe it as an act of group solidarity, but that's a different thing.

Johnson, as the movie chronicles, is a former employee of a Planned Parenthood clinic in Bryan, Texas, who claims she was converted to the anti-choice cause after seeing an ultrasound-guided abortion performed in her clinic. She now makes a living writing books and giving handsomely compensated speeches to anti-abortion zealots, selling them a story they want desperately to hear: That Planned Parenthood isn't a nonprofit reproductive health clinic at all, but more like a sleazy organization that is trying to "sell" more abortions because they're so profitable. (Cue scary music and evil laughter.)

The truth is, unsurprisingly, a lot murkier than that. As Texas Monthly reported in 2010 when Johnson was ramping up her career as a professional anti-choice activist, two of her former co-workers at Planned Parenthood "testified that she told them in the days before she resigned that she was afraid she was about to be fired." This happened during a court battle in which Planned Parenthood tried to recover confidential files the organization claimed Johnson had stolen. According to Planned Parenthood officials, Johnson had been put on a "performance review plan" -- often the first step toward firing an ineffective employee -- just three days before her miraculous conversion.

On the night Johnson quit working at Planned Parenthood, she posted angrily on Facebook, "I have been working my whole big butt off for them," adding that "they have the nerve to tell me that my job performance is “slipping.'"

Another 2010 piece in the Texas Observer unearthed further details of the circumstances surrounding Johnson's departure from Planned Parenthood. Johnson's friend Laura Kaminczak described Johnson's story as "bullshit," saying that she and Johnson had both gotten in trouble with their respective employers for using work email for inappropriate conversations. Kaminczak also told the Observer that Johnson had had two abortions herself. Johnson later admitted this, and has incorporated it into her conversion tale, adding more meat to her Christian-friendly narrative of personal redemption.

Even before that detail came out, other people who had worked in abortion clinics were openly skeptical of the idea that she had been clueless about the mechanics of abortion before observing the one she talks about so often on the right-wing speaker's circuit. Amie Newman, a former clinic worker, noted in a Rewire article that ultrasounds are standard in abortion care, and felt it was highly unlikely that Johnson had not seen such images before.

Nate Blakeslee of Texas Monthly has described what he calls "inconsistencies" in Johnson's story, which I believe could be better characterized as  lies. For instance, the post-conversion Johnson has said that "there had never been any threats of violence against the Bryan clinic." As Blakeslee pointed out, "Johnson herself received a series of threatening letters in 2007."

Perhaps more important, in reviewing clinic records Blakeslee discovered that none of the abortions performed on the day of Johnson's supposed conversion — or performed at any time during that week — fit the description she offered. None came even close.

Johnson's story is a fairly typical example of right wing projection. She accuses Planned Parenthood of being sleazy profiteers, but she more closely fits the mold of a huckster profiting off the rubes. She tells her rapt audiences that Planned Parenthood wants more unplanned pregnancies and therefore more abortions. But in reality, she is an adamant opponent of pregnancy prevention, while Planned Parenthood is a trusted provider of contraception, which research shows is the only truly reliable method to prevent abortion.

Johnson built her career as a right-wing con artists by claiming she is sharing a "truth" that supposedly nefarious liberal forces don't want you to hear. The marketing push for "Unplanned" is based on the same con: Telling conservative audiences they're being "censored" and encouraging them to fight back against this brutal oppression by seeing this movie instead of something genuinely entertaining, such as "Shazam!"

In March, the Twitter account for "Unplanned" was accidentally suspended, due to a programming issue. The account was quickly restored, but the marketing forces and conservative media understood they now had a pretense to claim censorship, which they did with wild abandon. The idea that the movie was being suppressed spread rapidly through Republican circles, leading to Wednesday's Senate hearing, in which co-director Chuck Konzelman portrayed himself as the victim of a tech conspiracy to silence him.

The Twitter nonsense is only part of the larger scam behind the movie's marketing campaign. Conservative media is hyping the idea that the mainstream or "liberal" media is refusing to acknowledge or review the film, and claiming that its R rating is a form of censorship, instead of a reaction to what reviewers describe as over-the-top gore. (Anti-choicers like to scare people by suggesting abortion is like open-heart surgery, when it's closer to having a heavy period.)

In truth, though, the filmmakers didn't even bother to offer preview screenings to movie critics, thereby guaranteeing the lack of coverage that conservatives then seized on as evidence of the alleged censorship.

Falsely claiming censorship is a common right-wing con, as Sharon Kann of Media Matters outlines. Anti-choice groups in particular go back to that well again and again, to raise funds and draw attention to their otherwise lame and boring propaganda. This time, the marketers got a big boost from Ted Cruz, who amplified their false claims with an actual Senate hearing.

It's tempting to shrug off this entire spectacle as unimportant. Who cares if a bunch of right wing hucksters bamboozle their own people into wasting money and time on a movie that tells them exactly what they want to hear, which is that Planned Parenthood is an evil baby-killing machine?

Unfortunately, though, this propaganda is no longer limited to conservative audiences. For instance, ABC News did a soft focus profile of Johnson that took her conversion story at face value, never mentioning her employment issues or the fact that the abortion she claims caused her sudden conversion seems never to have happened.

Right now, there is a dramatic assault on abortion rights throughout the country. Alabama lawmakers are trying to make abortion a felony. Four states have passed laws in recent months that effectively ban abortion, by setting a gestational limit so early that the procedure cannot be safely performed. Texas is considering a law that, at least hypothetically, would permit the execution of women who have abortions.

Propaganda like "Unplanned," which inverts reality by portraying responsible medical professionals as villains, and misogynists who want to force women into childbirth as heroes, is anything but harmless. It boosts these efforts to oppress women and strip them of their rights. Anti-choicers can't win this argument in a reasoned, evidence-based debate, so instead they resort to lies and histrionics. Republicans in Congress and overly naive people in the media, wittingly or not, are only amplifying these lies.