On "Russian salad," my favorite potato salad in the world 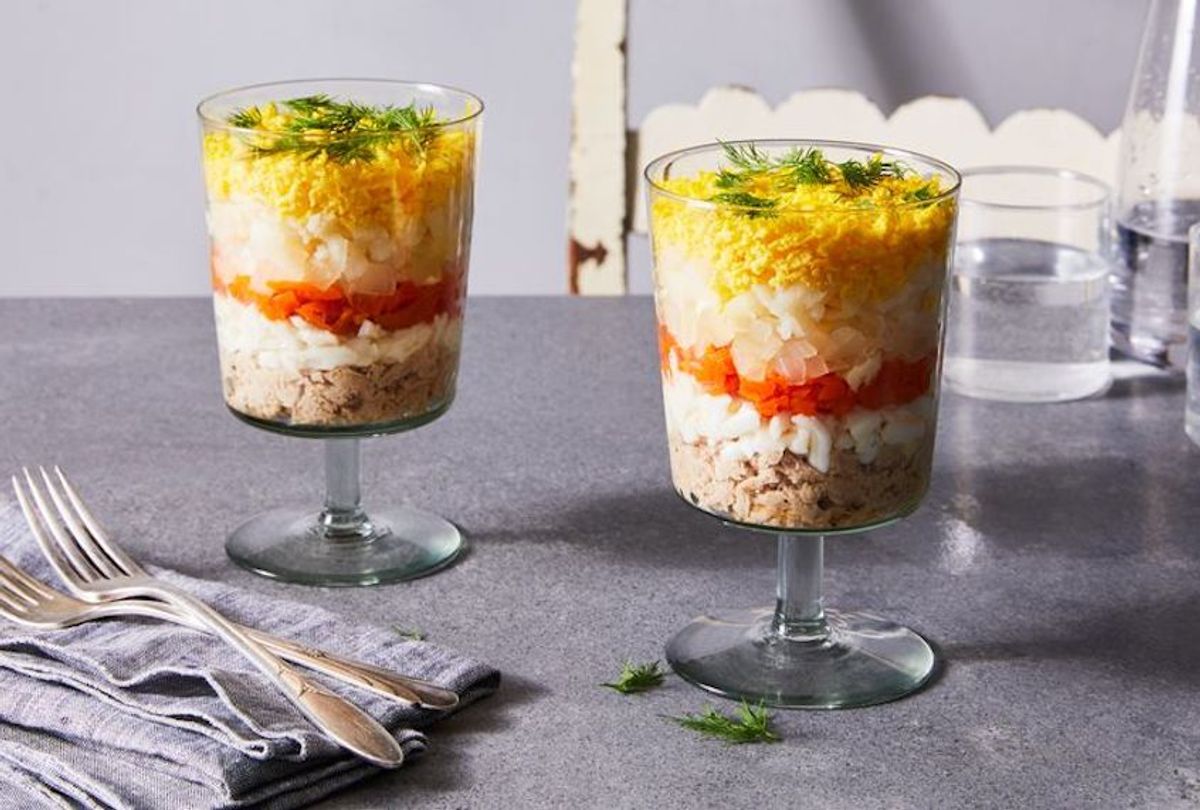 While I appreciate a green salad from time to time, I have a particular fondness for mayonnaise salads. That side of coleslaw that comes with a diner sandwich or a barbecue platter is never superfluous to me. I can polish off a whole bowl of chicken salad, and I subconsciously leave enough space on my plate for potato salad whenever I’m at a potluck or picnic. I sometimes even mix a dollop of mayonnaise into cold leftovers to make a sort of impromptu salad whenever I get sudden hunger pangs late at night.

One of my favorite types of mayonnaise salads is actually my favorite type of potato salad. Throughout South America, potato salad is referred to as ensalada rusa, or “Russian salad.” Cubes of cold potato get dressed in a generous amount of creamy (often homemade) mayonnaise, and the mixture is interspersed with perfect proportions of blanched diced carrots and peas.

I never really knew why it was called Russian salad. As a child, I imagined that it was named such because the snowy-white mayonnaise was reminiscent of Russian winters. In my mind, the chunks of potatoes were supposed to be snow-capped mountains, the peas stood in for spruce trees, and the orange carrots represented the legendary Russian bears roaming the hoary countryside.

It wasn’t until I got older and began eating and learning about Slavic cuisines that I discovered why the South American version of potato salad was called Russian salad: because it actually is a Russian salad. However, it’s known as “Olivier salad” in Russian homes and restaurants.

Mirroring the richness of the mayonnaise that binds it together, this salad has a rich history. Before the Bolshevik Revolution in 1917, it was fashionable to bring Western European chefs to Russia where they cooked for aristocratic families and at fancy restaurants. One such chef of Belgian origin, Lucien Olivier, is credited for inventing Olivier salad, although the original version is a lot more luxurious than the contemporary preparation. It included capers, grouse, crawfish tails, and even caviar.

These ingredients had become very scarce in Soviet-era Russia, but this didn’t detract inventive cooks from coming up with solutions to food shortages. According to Olga and Pavel Syutkin, authors of "CCCP Cook Book: True Stories of Soviet Cuisine," Chef Grigory Ermilin invented a version of the pre-revolutionary salad in 1939 that was more feasible for his contemporaries to recreate. Named “Stolichny salad,” this Soviet take on Olivier salad replaced the capers with peas, the crawfish with carrots, and the grouse with poached chicken. The end result mimicked the colors and textures of the original while being accessible to the average Russian of the time.

This salad became a staple on many celebratory tables, and is still as much a favorite among residents of the former Soviet Union and its satellite states as it is in South America. Eventually, the name of the original salad conflated with Chef Ermilin’s creation to the point that few people who know of Olivier salad could ever fathom it containing capers, grouse, or crawfish tails.

I would later find out that Olivier salad was far from the only rich, mayonnaise-laden cold dish that Russians and other Eastern Europeans enjoyed. My friend, Sergey, who is originally from Ukraine, threw open the doors to a whole new world of creamy salads after inviting me to a dinner party.

The buffet table in his dining room was groaning under the weight of dozens of delicacies he prepared. Among the platters of fried pork cutlets with lightly crisp exteriors and meltingly tender meatballs were several cold dishes whose fancy garnishes instantly drew my attention. I recognized one as my favorite ensalada rusa, although this was a deluxe version containing pieces of cured meats along with the customary potatoes, peas, and carrots. But there were other salads, too, that I didn’t know as well, even though they all featured a familiar element that told me I would probably like them: mayonnaise.

As I dug serving spoons into the various casserole dishes containing these salads, I was delighted to see layers! I love little culinary surprises like that. A layered salad gives me the same delight as cracking into a crème brûlée, uncovering the pastry lid of a chicken pot pie, or even biting into a bonbon. It feels like unwrapping a present, except that each layer is edible and delicious. I was falling in love with Sergey’s cooking with every bite I took, reminding myself to make sure to invite him to every party I throw moving forward.

All of these Russian beauties were like upgraded versions of the American mayonnaise salads that took over the United States mid-century. There was one that included layers of potato, boiled egg, tuna, and carrots. Another included potatoes, poached chicken, pickled mushrooms, and even pineapple.

I noticed that there was a type of formula to making these salads. With the exception of the Olivier salad and a cheesy egg salad, the ingredients weren’t mixed together. Instead, each element was thoughtfully layered so that different flavors and textures hit the palate at specific times. There was almost always starchiness from potatoes, a savory meat or fish component, a bit of acidity from something pickled, and some sweetness from carrots, beets, or fruit. You can make it even more sophisticated with additions of cheese, herbs, and finely chopped hard-boiled eggs. A dollop of caviar or a variety of meats can add to the luxury, as well.

The other pattern I noticed that differentiated these salads from their American counterparts was that the vegetables were grated instead of chopped into large cubes. This gave the salads more refined textures while also making them much easier to layer. The trick to making sure that the grated vegetables don’t turn your salad into a layered mash is to cook them until they’re no longer raw but still firm enough to offer some resistance when you bite into them. Roasting can help with this.

Perhaps the most important element in these Slavic layered salads, however, is the one thing that makes them so appealing in the first place. In tasting Sergey’s salads, I knew deep in my soul that the creamy mortar that held all of these layers together couldn’t possibly come from a jar you buy at a conventional grocery store chain. I asked my friend about the mayonnaise he uses, and he told me that he always makes his own. According to him, that’s the only acceptable way to make these salads. Being a mayonnaise connoisseur, myself, I agreed. It was comforting to know that despite our different cultural backgrounds, we could connect on this very important detail.

Sergey’s mayonnaise is different from the garlicky, limey Peruvian-style mayonnaise that I make. It has that perfect balance of sweetness and savoriness that makes you want to slather it on pretty much everything. It’s also quite subtle, which means you can add freshly minced garlic, herbs, spices, or chili paste to it to give your layered salads even more complexity.

Fortunately, Sergey shared his go-to recipe with me, and I have his permission to share it with you. Try it out the next time you need to bring a cold dish to a potluck, along with the layered approach to making a mayonnaise salad. You’ll surprise guests with your elegant take on the more predictable potato salad.