"Game of Thrones" recap: It's a reunion! The dying can start any day now

Reunited, and it feels so good ... except when we remember how little time we left to service so many characters 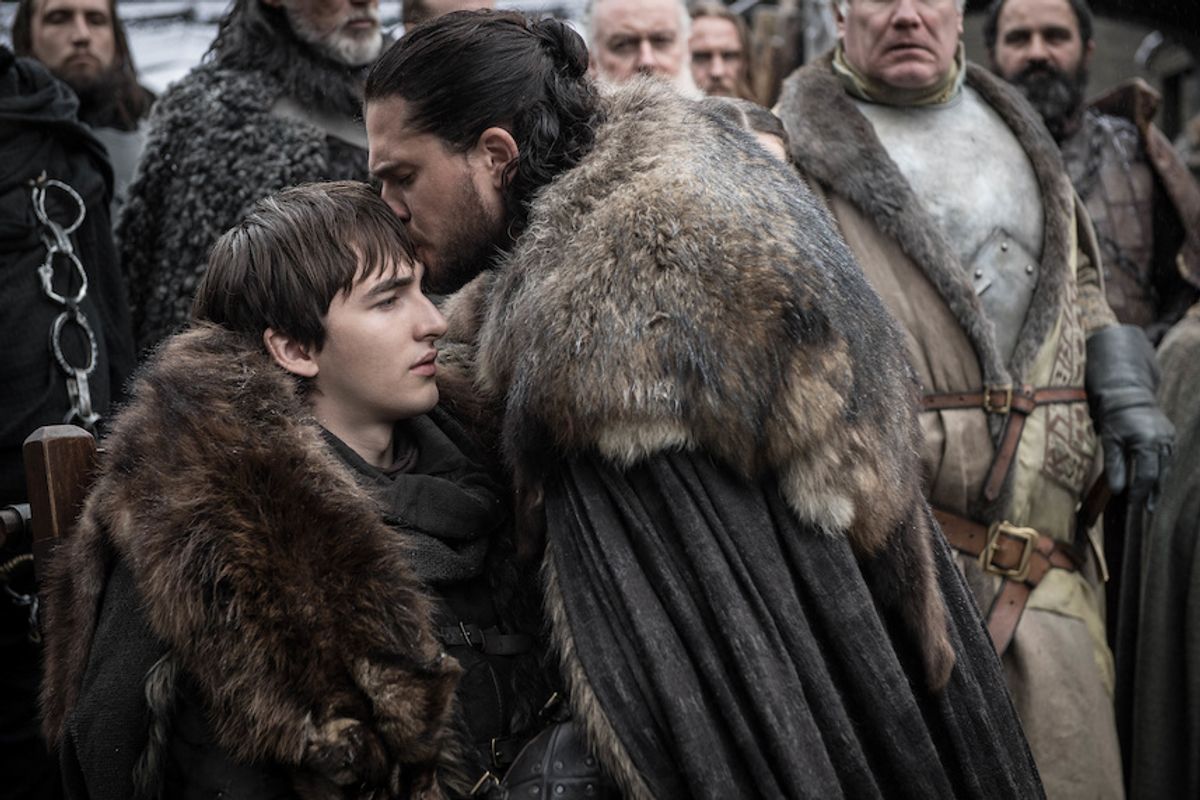 (Spoiler alert: This article discusses details about the Season 8, Episode 1 episode of "Game of Thrones." Stop reading if you haven't watched yet, or don't blame us for what you find out.)

Fear and wonder — now there's a dance of dragons for you.

Much of Sunday’s season 8 premiere of “Game of Thrones” held the latter, warmly welcoming viewers back with luxurious shots of dragons flying over Winterfell, and recollections of where it all began and how far we’ve come since season 1.

It also gave us pretty much what we’ve wanted to see since the last time we visited Westeros, in late summer of 2017. Homecomings? Check! A particularly gigantic one, in fact. A gloriously surly Lady Lyanna Mormont (Bella Ramsey)? Sure. A truly messed-up message created with flaming human limbs and a child’s body turned wight, courtesy of the Night King? Yep. And Jon Snow (Kit Harington) takes his first dragon ride.

All this, and a few well-placed lines that remind us that time is running out. So while it was nice to see the gathering of the tribes, in the words of Bran “Thousand-League Stare” Stark (Isaac Hempstead-Wright), we don’t have time for all this.

The finale season’s opener title is "Winterfell," but it might as well have been titled The Reunion Episode. A lot of little occurrences and satisfying hellos happened courtesy of writer David Hill and director David Nutter, and against my expectation, no major goodbyes left us slackjawed at the end of it all — although honestly, Tormund (Kristofer Hivju), Beric Dondarrion (Richard Dormer) and Dolorous Edd (Ben Crompton) probably should have bitten it.

In addition to reminding us of where the story left off in 2017, Hill tied up a few loose ends and revisited a few game-altering crimes and misdemeanors. The most significant: Jaime Lannister (Nikolaj Coster-Waldau) arrives at Winterfell and dismounts from his horse, an anonymous man in muddy black, only to be caught in Bran’s gaze and immediately disarmed.

The Reunion Episode was as full of such oh-snappery as it was with heart-swelling visions of the gang, all gathered.

Much of this was covered in the initial parade into Winterfell: Arya (Maisie Williams) sees The Hound ride in among the Unsullied and the Dothraki, then meets him at close range later. Arya also reunites with Gendry, and asks him to make her a strange weapon whose purpose she refuses to explain. Her initial sighting of them during the great march told a more truthful tale about her feelings.

Williams’ expressions speak much more loudly and poignantly than Arya’s dialogue, which is of course on purpose. Between her, John Bradley (who plays Samwell Tarly) and Sophie Turner, viewers had time to appreciate how much these performers have evolved as artists. Williams' quietly powerful performances  have received a great deal of attention over the years, but in this premiere Turner grants Sansa a refined serenity disguising a stone-hearted chill that feels utterly new.

Bradley, for his part, wears the ponderous task of his character having to deliver world-shifting news to the possible future king while processing the information that his best friend’s lover committed terrible acts against his family.

“You’ve never been a bastard,” he tells Jon. “You are Aegon Targaryen, heir to the Iron Throne. Sixth of his name, protector of the realm, all of it.”

The look on Jon’s face? Fear and wonder. And horror, probably. A short time before that he made out and possibly knocked boots with his biological aunt.

On the other hand, he also soared the skies on the back of Rhaegal, named for his father, as so many people had predicted he would — and the scenes of Drogon and Rhaegal flying their riders across the frozen North reignited the magic of this drama.

It’s not just the dragons that made this episode soar, but the chemistry between Emilia Clarke and Harrington feels more natural this season than in their characters’ initial interactions.

Callbacks to past plotlines assisted in that regard as well, especially in terms of conveying the higher stakes and vaster scope now at play.  Later as Daenerys Targaryen (Emilia Clarke) and Jon Snow would enjoy a brief private interlude at the base of a waterfall surrounded by snow, a smitten Dany tells Jon they could stay there for a thousand years.

Jon once entertained a fantasy like that with another woman he once loved, Ygritte (Rose Leslie), in the depths of a cave. In the darker times that came after, he rued their decision not to remain there.

The hour opened with the camera following a small boy as he dashed through the crowds of adults to get a glimpse at the foreign army on its way into the Northern stronghold’s keep, struggling for a clear view until he climbed a tree, much like Bran Stark did when he was younger.

Bran had looked out at a much smaller retinue, that of King Robert and Cersei Lannister (Lena Headey). The forces amassing at Winterfell make Robert’s parade of knights look like nothing.

The premiere was a multi-course dinner of such storytelling small plates.

Straightaway we had Tyrion Lannister (Peter Dinklage), Hand of the Queen, meeting former wife Sansa, Lady of Winterfell, for the first time since The Purple Wedding. Remember? She fled the scene; he was nearly executed.

Apologies for leaving you like that, she tells Tyrion with a chill in her voice, nonchalantly adding “…we both survived.”

In the larger scheme of things, worse harm was done to Tyrion by others. The only words he has for her are almost affectionate. “Many underestimated you,” he tells her. “Most of them are dead now.”

Even better, however, were the moments proving that her years of abuse at the hands of cruel, powerful people were a whetstone for an arsenal’s worth of sharp comebacks. She all but laughs at Tyrion’s assurance and belief that Cersei would order her armies to march North to join the North’s cause. “I used to think you were the cleverest man alive,” she spits at Tyrion. May she gift us with many such lines.

Indeed, the broader message of this table-setting episode is how much Jon Snow truly doesn’t know about the people who named him as ruler. Sansa does not warmly embrace Dany. The Northerners don’t much like the looks of the Unsullied and Dothraki forces reinforcing Winterfell. A lingering shot of the snowbound smallfolk cutting their eyes at Missandei (Nathalie Emmanuel) and Grey Worm (Jacob Anderson), at the very least, is enough to make you go, “Hmm.”

More poignantly, Arya reunites with Jon, who naively asks her if she still has the blade Needle and, even more ludicrously, if she’s ever used it. To him she’s still his little sister, not an expert assassin who lives by the sword he made for her. Jon also has a strange reunion with Bran, perplexed when Bran doesn’t match his affection. The Northern folk don’t take kindly to … outsiders.

Meanwhile in King’s Landing, Euron Greyjoy (Pilou Asbaek) brings the Golden Company (headed by one Captain Strickland) back to Cersei and insists in payment of the carnal variety. She rebuffs him, and then agrees, because she may or may not have a small passenger whose parentage she needs to cover. So when Euron whispers to her, “I’m going to put a prince in your belly” she just smiles, because that little throne is already taken.

While that’s in progress Theon Greyjoy (Alfie Allen) rescues his sister Yara (Gemma Whelan) without much resistance, then leaves her to retake the Iron Island as he rides for Winterfell.

Also in play while Cersei is making Euron dumber: She sends Qyburn to hire Bronn to kill Tyrion and Jaime. That means now we get to see if the whole bros over … um, gold … code really is true. He’s saved both men’s lives, after all. That has to mean something — in a world that isn’t Westeros.

Historically the season openers of “Game of Thrones” are rarely if ever listed among the epic’s best. Collectively they might be considered the series’ welcoming committee, written in a way that each scene might open with “In case you’ve forgotten.”

And there was a lot of that in Sunday’s episode, along with the raising of a few points that we may not have considered. Some of them were designed to make us laugh, topmost being the strange social media fascination with what was going through Drogon’s reptilian brain as he watched Dany and Jon make out.

There was also a great deal of foreshadowing with regard to the thornier politics ahead. Jon never wanted a crown, whereas rulership is all Dany has ever wanted. Jon wants family to stick by him, but with Arya siding with Sansa, finding out his sisters are actually his cousins may not strengthen his case.

But to return to Bran’s complaint, there isn’t much time left in “Game of Thrones.” How much of this intrigue are we going to be able to meaningfully parse in the next five episodes? The writers didn’t give Cersei the Golden Company for nothing, elephant-free or otherwise. And from the looks of next week’s scenes, the Night King won’t be wasting time in getting to Winterfell.

This is always the main quandary with ending any story that’s epic in scope. “Game of Thrones” has been building up to the confrontation between the worlds of the living and the dead since April 2011.  That’s a long time for expectations to rise, and puts the pressure on the writers to answer that question in a fashion that’s both realistic and satisfactory. The writers and directors must give that confrontation adequate service; at the same time, there are a lot of other small details to attend.

The woman at the top of Arya’s kill list, and the likelihood that the custom weapon Gendry is designing has something do with her plans, for example. And Maggy the Frog’s prediction that Cersei would die at the hands of one of her brothers. And Cleganebowl. And Greyjoy payback, and whatever the heck is going on across the sea. And. And.

How they’ll pull it all off successfully is as much of a mystery as who will end up ruling the Seven Kingdoms. Then again, in a few weeks it’s possible that we’ll be looking back at this reunion episode wistfully. The pleasantries have been dispensed with, and the pieces are in place, and the dead are on the march. A lot of dying is coming down the road at us, and much of it will break our hearts.

We wish we didn’t have to say goodbye to all the figures we’ve spent nearly a decade getting to know, but it’s at the gate and in the offing. Five episodes remain. I wonder if we’ll be satisfied at the bloody end of them.