Are women "too emotional" for public office? Even after Trump, some people believe that

Even with a president who lacks any impulse control, many Republicans still believe women are overly emotional 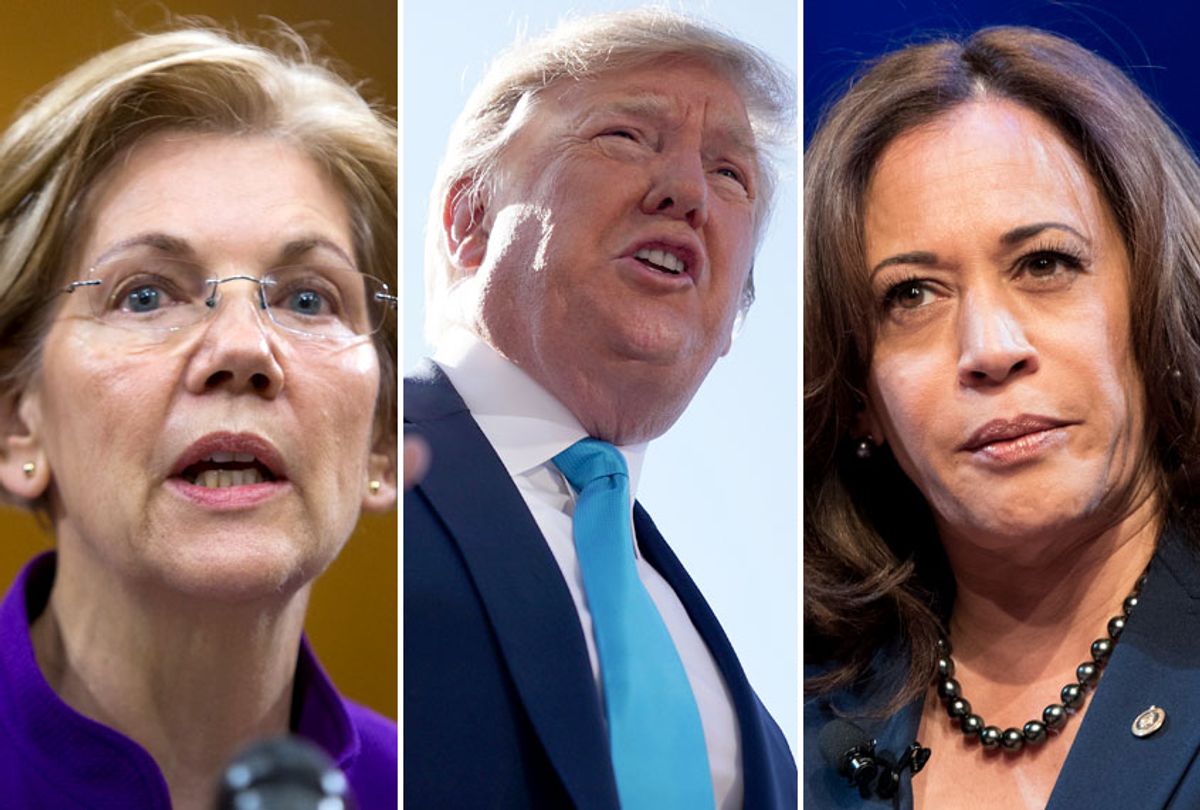 Of the many reasons to loathe Donald Trump — his lying, his fascist impulses, his cheating, his grifting, his lack of empathy for other human beings — perhaps the most continually startling is his emotional incontinence. Due to a steady stream of live TV appearances, grammatically unhinged tweets and anonymously sourced complaints from White House officials, we're subject to daily, often hourly reminders that Trump has lived on earth for 72 years and still has the impulse and emotional control of an especially trying toddler.

Despite all this, however, significant numbers of Americans — and Trump voters in particular — still believe that's it's women who do not possess the emotional maturity required of those who seek high office.

A new study published by the Georgetown University Center on Education and the Workforce shows that, according to recent data collected by the General Social Survey, 13% of Americans still believe that men are "better suited emotionally for politics than most women." That number is down since the 1970s, to be sure, but still shockingly high in a country where Hillary Clinton, despite losing in the Electoral College, received nearly 3 million more votes than Trump in the 2016 presidential election.

(The gender gap was reversed for Democrats. Around one in 10 Democrats disapproved of women running for office, but men were more likely to feel that way than women.)

The number of people who will tell a pollster that women were unsuited for office has been trending downward for awhile, but the research shows a spike in 2016, which obviously in response to Clinton's presidential campaign. This was especially true for Republican men, with around four in 10 saying that women were less emotionally capable of handling political office.

This temporary spike suggests, unfortunately, that the real number of people who are uneasy about women sharing political power is likely quite a bit higher than the poll suggests. It's a lot easier for people who harbor sexist sentiments to deny those feelings when faced with a entirely hypothetical scenario: Could some woman, someday, be a qualified president? Well, sure! But when that hypothetical becomes a reality and a woman actually runs, then there's a sudden surge in the number of people who grasp for a reason to withdraw their support.

This has been sadly obvious when it comes to the career of Elizabeth Warren. During the 2016 primary, it was quite common for Democrats who supported Bernie Sanders, especially men, to claim that they felt no hostility towards women and would love to support Warren, if she were running. ("I'd vote for Warren in a heartbeat," became the battle cry of such voters across social media platforms.)

But now that those voters have an opportunity to make good on this promise, there's been a widespread reneging. Despite all the promises about heartbeat-swift support for Warren, she's sitting stubbornly at around 7% in Democratic primary polls, roughly tied with Pete Buttigieg, who has leveraged his "nice young man" persona — emphasis on "man" — into a surprisingly robust presidential campaign, despite having much less political and policy experience. (As in, virtually none.)

However, the ups and downs in attitudes towards female candidates also suggest a reason for optimism. These attitudes are not set in stone, and there's good reason to believe that time and exposure to new ideas and new people can shift even long-standing perceptions of women's capabilities.

Even Clinton's run provides some occasion for hope. Yes, there was a temporary spike in hostility towards female candidates in response to her campaign, but she also helped soften people up to the idea of having a female president at all. (After all, she did win the popular vote by a healthy margin.) Having multiple women on the debate stage for the coming Democratic primary campaign should  further normalize the idea that this is something women are fully capable of doing.

What's perhaps most fascinating about this research is how it shows that gender stereotypes are largely about people rationalizing their prejudices, and not a result of bias-free observations about the world. After all, the idea that Donald Trump is more emotionally stable than Hillary Clinton -- or than literally any any of the Democratic women seeking to challenge him in 2020 -- is on the level with believing that dragons and unicorns are real. Yet a large number of people who voted for Trump are ready to die on that particular hill, because believing women are unbalanced or unreliable justifies keeping them out of power.

This situation is by no means hopeless. Stereotypes are not impervious to counter-evidence, especially when presented with feminist arguments and analysis. Over the past couple of years, the idea that men are more emotionally controlled than women has become the focus of intense criticism, starting with the Women's March, launched in outrage at watching an impetuous man-child defeat a capable woman in the 2016 election. It's continued with the #MeToo movement, which has systematically exposed how so many of men who held positions of power and authority were actually spoiled brats who routinely gave into the impulse to bully and harass women.

The idea that men are naturally more calm and controlled than women is giving way to the ugly reality that far too many of them are totally incapable of handling the power they've been given. As Democratic voters get to know the capable women running for president this cycle, perhaps they'll overcome false stereotypes and let a woman have another crack at defeating the tantrum in an ill-fitted suit who currently contaminates the White House.