Cheering on Tiger Woods? It's complicated

The story of a golf legend who just made a legendary comeback should be a simple one, but it's not 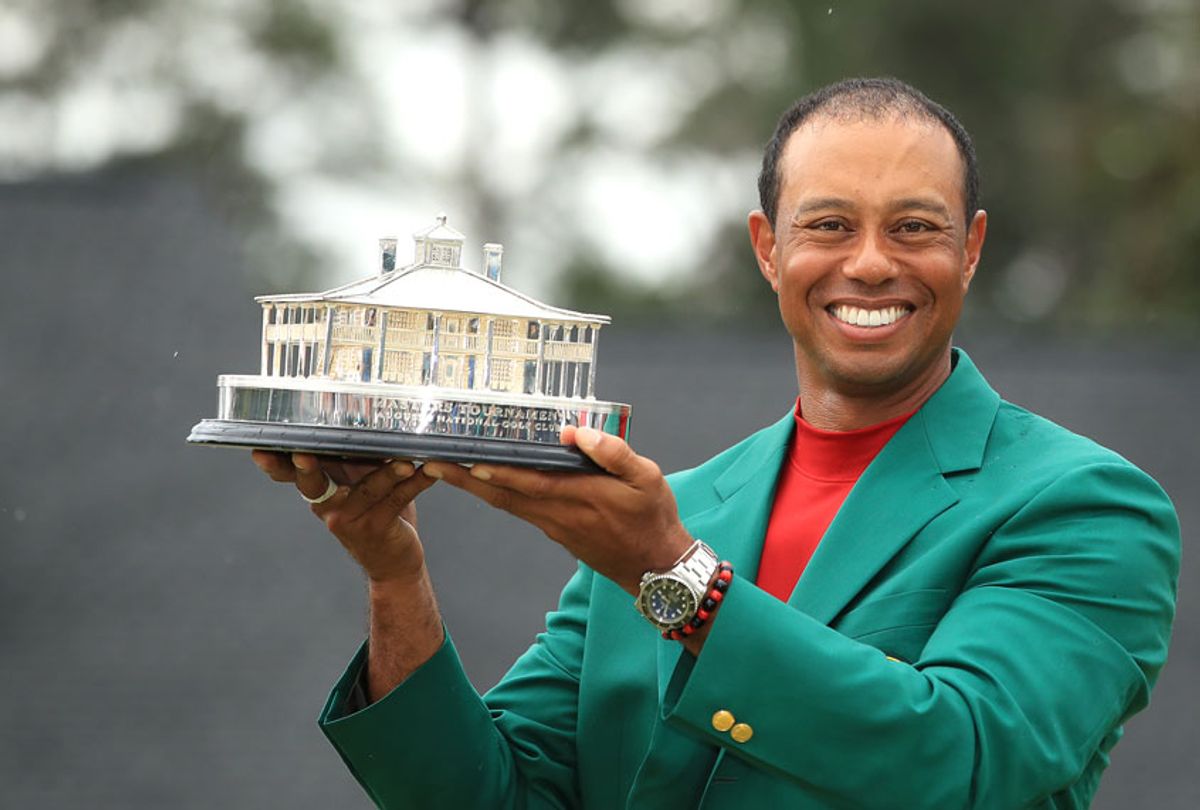 Tiger Woods of the United States celebrates with the Masters Trophy during the Green Jacket Ceremony after winning the Masters at Augusta National Golf Club on April 14, 2019 in Augusta, Georgia. (Getty/Andrew Redington)
--

Something extraordinary happened over the weekend. Tiger Woods won his fifth Masters at 43 years old, becoming the second-oldest winner in Masters history. But more than that, his win marked a singular comeback. It had been 14 years since Woods' last victory at the annual Masters Tournament at Augusta National Golf Club in Georgia and 11 years since he won his last major title. Since then, Woods has recovered from a car crash and four back surgeries (the most recent was just two years ago), came out on the other side of an infamous and humiliating infidelity scandal followed by rehab for sex addiction as well as a DUI arrest, to name just a few of the prominent roadblocks that have complicated the trajectory and legacy of one of the greatest athletes in golf history. To see him win on Sunday was to witness, as six-time NBA all-star Stephen Curry dubbed it,  "the greatest comeback story in sports."

There is no denying the sheer power and accomplishment of Woods' victory. Many athletes and sports fans — including both former President Barack Obama and President Donald Trump — celebrated what felt like a historic moment when Woods won his 15th major title after an 11-year drought, and his fifth green jacket.

"Just unreal, to be honest with you," Woods said of his win to ESPN. "Just the whole tournament has meant so much to me over the years. Coming here in '95 for the first time and being able to play as an amateur. Winning in '97 and then come full circle 22 years later, to be able to do it again. And just the way it all transpired today."

"This has meant so much to me and my family, this tournament, and to have everyone here, it's something I'll never, ever forget," he added.

But as sports journalist Bomani Jones tweeted, "[N]othing displays america’s collective ability to compartmentalize quite like a tiger woods victory. we don’t even really like this dude but this feels amazing."

Jones really captured the nuanced cheer for Woods' redemptive victory. To acknowledge his unparalleled accomplishments in sports, and in golf specifically, is not necessarily an endorsement of his off-the-grass behavior. But it does articulate one of the complexities present in rooting for Woods. As Jemele Hill put it on her new podcast, "how do you properly put into perspective somebody winning who you don't really f**k with?"

In most recent memory, nothing is more complicated to get behind when it comes to Tiger Woods than his friendship with Donald Trump. The president tweeted after Woods' victory that he would award the golfer the Presidential Medal of Freedom, "Because of his incredible Success & Comeback in Sports (Golf) and, more important, LIFE."

Woods and Trump have long been friends. As the New York Times reported, "They own property near each other in Florida and have golfed together a number of times, both before and after Mr. Trump became president." The two are also in business together, according to the Times, with Woods designing the golf course at Trump's forthcoming golf club in Dubai. And just two months ago, Trump tweeted a photo of himself, Woods and golfer Jack Nicklaus at his golf course in Florida.

While Woods doesn't boast about their relationship in the same way Trump does — which may very well be a strategic stance, given Trump's politics — their enduring friendship in spite of the rhetoric and policies coming from the Trump administration is telling. "He's the president of the United States," Woods told the New York Times last year. "You have to respect the office."

Hill raised another excellent point on her podcast about the problematic nature of the Woods/Trump friendship. As we've seen with Kanye West, with Jim Brown, and even briefly with Chance The Rapper's defense of Kanye, when a black celebrity is friendly with the Trump administration, the president, his surrogates and the GOP seek to exploit and even weaponize that relationship, holding it up as "proof" that Trump can't possibly be a raging white supremacist.

This has undoubtedly complicated what it means for some spectators to root for Woods wholeheartedly, even though he has shattered barriers in a sport that has a shameful and exclusionary history when it comes to race. The Masters Tournament banned black players until 1975, and the Augusta National Golf Club did not have black members until 1990, according to The Undefeated.

Last year, the New York Times asked Woods if he had thoughts about the state of race relations in the U.S. following a tournament. "No, I just finished 72 holes," he said. "And really hungry."

Of course black Americans — famous or not — should not be the only people asked about America's inability to deal meaningfully with its racist history and present, just as it is not the black community's responsibility to fix perpetual institutional and systematic racism. In fact, white Utah Jazz player Kyle Korver published an insightful op-ed last week about white privilege and the responsibility and urgency of white people to stand up against racism. "I have to continue to educate myself on the history of racism in America. I have to listen," he wrote in the Player's Tribune, "I have to support leaders who see racial justice as fundamental — as something that’s at the heart of nearly every major issue in our country today. And I have to support policies that do the same."

Korver continued, "I have to do my best to recognize when to get out of the way — in order to amplify the voices of marginalized groups that so often get lost. But maybe more than anything? I know that, as a white man, I have to hold my fellow white men accountable."

Perhaps what's interesting about Woods' penchant to distance himself from conversations around race is that it hasn't prevented race from informing much of the framing of his career, as well as the backlash to his missteps. As The Undefeated reported after his DUI arrest in 2017, "A 41-year-old man who has famously insisted on his mixed racial heritage was identified in the arrest report with one word: black."

While Woods sees himself as "Cablinasian" — to reflect his blend of white, black, Native American and Asian ancestry — to the police, and given the harmful legacy of America's "one-drop rule," Woods is perceived and treated as black when it comes to his lapses. The extreme indignation towards his high-profile infidelity scandal also reeked of racism, especially compared to how the GOP has minimized Trump's similar malfeasances.

There are also many examples of how Woods' talent and success have been enveloped by racist stereotypes, but one example early in his career always sticks out. During the 1997 Masters, golf champion Fuzzy Zoeller was asked about Woods, and he said. "He’s doing quite well, pretty impressive. That little boy is driving well and he’s putting well. He’s doing everything it takes to win. So, you know what you guys do when he gets in here? You pat him on the back and say congratulations and enjoy it and tell him not to serve fried chicken next year. Got it. Or collard greens or whatever the hell they serve." Zoeller has since called the remark "a joke that went bad" and Woods has long forgiven him.

All of this is to say that as public figures go, Tiger Woods is complex. But when it comes to his incredible victory on Sunday, in a sport that has been openly hostile to black people, including at times to Woods himself, this chapter of his redemption story is one we can all get behind.