Pete Buttigieg, Rachel Maddow candidly discuss coming out: "It would have killed me to be closeted" 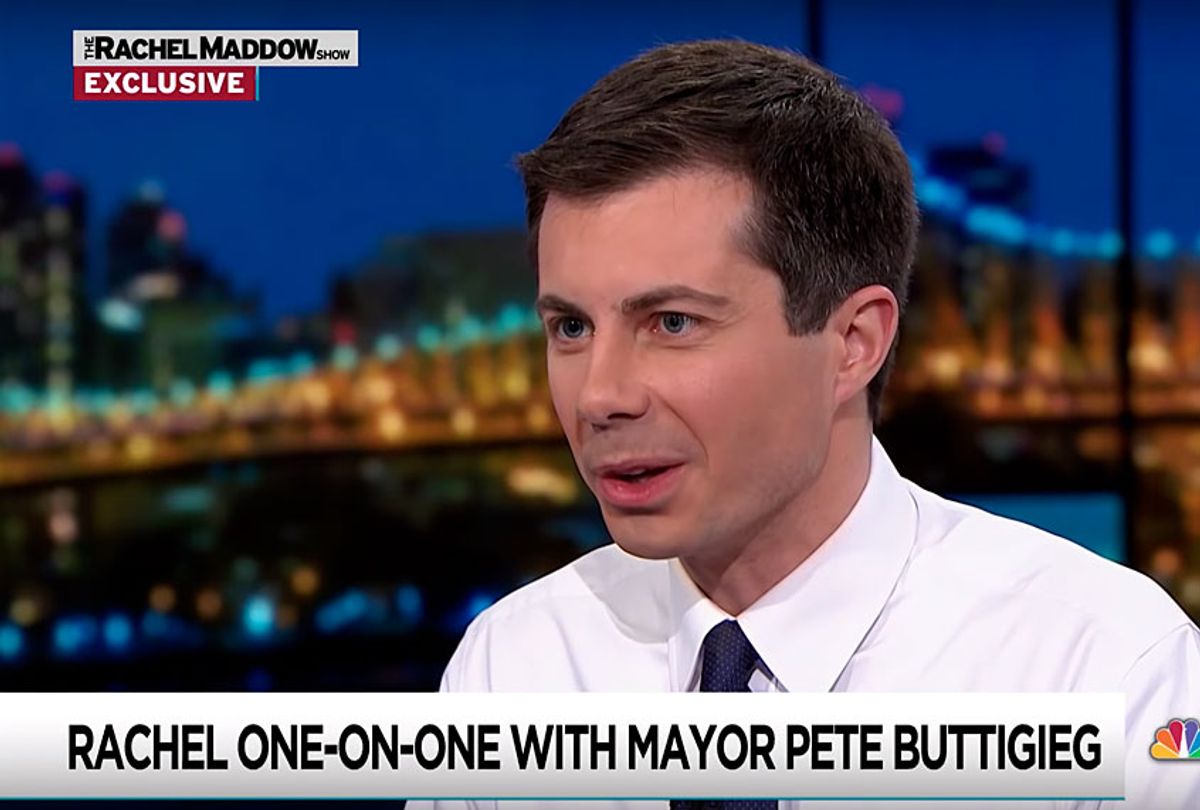 It's been almost four years since the U.S. Supreme Court ruled in favor of same-sex marriage. Yet LGBTQ Americans continue to experience harassment and discrimination and there are signs of a broad right-wing pushback. On primetime television on Monday night, an extraordinary conversation took place as Pete Buttigieg, a rising star in the Democratic Party, and MSNBC's Rachel Maddow, the country's first openly lesbian host of a primetime news program, candidly reflected on their experiences in coming out as gay.

"You went through college, and then the Rhodes Scholarship process ... and going to work for McKinsey and joining the Navy and deploying to Afghanistan and coming home and running for mayor in your hometown and getting elected before you came out at the age of 33," MSNBC host Rachel Maddow said to Buttigieg, who is the mayor of South Bend, Indiana, and a Democratic presidential candidate. "I think it would have killed me to be closeted for that long."

"It was hard," replied Buttigieg, who officially announced his 2020 campaign over the weekend. "It was really hard."

"Coming out is hard, but being in the closet is harder," Maddow, a fellow Rhodes scholar who came out when she was in college, said.

The 37-year-old small-city mayor revealed that in addition to coming out to others, it took him "plenty of time to come out to myself."

"There were certainly plenty of indications by the time I was 15 or so that I could point back and be like, 'Yeah, yeah, this kid's gay,' but I guess I just really needed to not be," he explained. "There's this war that breaks out, I think, inside a lot of people when they realize that they might be something that they're afraid of and it took me a very long time to resolve that."

In addition to the challenges many people may face when coming out as gay, the dark horse presidential candidate noted he was an officer in the U.S. Navy Reserve and an elected official in Indiana at the time he was planning on coming out publicly. He told Maddow he assumed, at the time, that both positions were "totally incompatible with being out."

Buttigieg also said that the demands of his job as mayor forced him to put his personal life on the back burner.

"I did get a lot of meaning from that work and in some ways, because it was so demanding, I almost didn't mind for a sort of inordinately long time that I didn't have much of a personal life," he said. "The city was a jealous bride for a long time and kept me busy."

He said his seven-month tour of duty in Afghanistan in 2014 really put him "over the top."

"I realize that you only get to be one person," he told Maddow. "You don't know how long you have on this earth, and by the time I came back, I realized, 'I've got to do something.'"

Buttigieg came out in a June 2015 op-ed in The South Bend Tribune, titled "Why Coming out Matters," just 10 days before the Supreme Court's landmark ruling that legalized same-sex marriage across the country.

"I was well into adulthood before I was prepared to acknowledge the simple fact that I am gay. It took years of struggle and growth for me to recognize that it's just a fact of life, like having brown hair, and part of who I am," Buttigieg wrote. "Like most people, I would like to get married one day and eventually raise a family. I hope that when my children are old enough to understand politics, they will be puzzled that someone like me revealing he is gay was ever considered to be newsworthy."

Asked by Maddow on Monday night if he was worried that coming out might cloud his mayoral re-election prospects, Buttigieg said he was unsure.

"I felt like I had done a good job by the people of South Bend, and I had some level of trust that I would be rewarded for that with a re-election, but there's no way to really know," he said. "There's no playbook. No executive in Indiana had ever been out and so it was kind of a leap of faith."

Buttigieg was elected to a second term in 2015, picking up nearly 80% of the vote — a slightly higher margin than his election in 2011, when he received 74% of the vote and became the youngest mayor of any U.S. city with at least 100,000 residents.

When it comes to the 2020 race, which involves a much more powerful office, Buttigieg said, "Most people are either supportive or even enthusiastic about the idea of the first out person going this far."

Buttigieg told Maddow that, at the very least, he hopes his bid for the White House will make it easier "for the next person who comes along."

Their frank conversation was widely praised on social media. Singer Chely Wright, the first openly gay country music star to come out, revealed she was in "tears" while watching the segment.

"I came out 9 years ago and I feel like now— in this very moment— there's is a tangible shift," she wrote on Twitter.