Hey, Democrats: Want four more years of this criminal lunatic? Keep it up

The cable-news circular firing squad and granular social media takedowns have to stop. We know how that ends 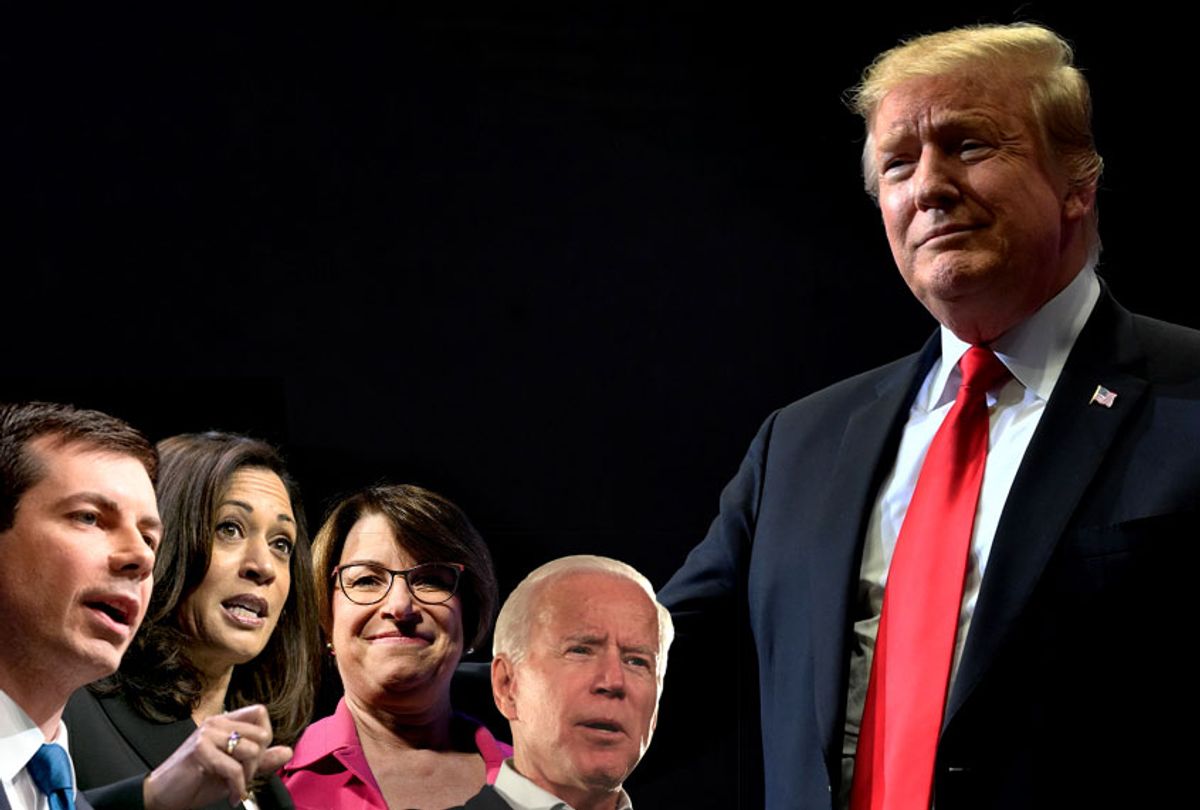 It’s hard to know who to be more disgusted with: the liberal media or the Democrats. They’re forming circular firing squads around the glass-topped anchor tables on MSNBC and CNN. They’re sniping at each other on op-ed pages. They’re posting unhinged, granular takedowns of their opponents on Facebook. They’re tweeting out quotes from decade-old speeches targeting each other for departures from liberal orthodoxy. They’re catching fellow Democrats for slips of the tongue, or use of the hands, or backroom misbehavior like -- gasp! -- yelling at a staffer!

And you know who’s watching? The white supremacist in chief; the man who ordered babies to be kidnapped from their mothers at the border; the author of the transgender ban in the armed forces; the man who appointed industry lobbyists to watch over our public lands, our air, our water and the safety of our transportation system; the man who has turned the Supreme Court into a rubber stamp for racism; the man who has said he believes Russian President Vladimir Putin is a greater leader than the three American presidents who preceded him; the man who has paid off porn stars, grabbed women’s pussies, and wants to put them in prison for having abortions.

WFT, Democrats? WTF, liberal media? Did we learn nothing over the last three years? We’ve watched Trump appoint a cabinet full of halfwits and criminals; we’ve watched him hollow out the government with budget cuts, neglect and ignorance; we’ve listened to him rail and screech his racism at public rallies and Fox TV interviews; we’ve listened to him tell thousands of lies; we’ve watched him excoriate the American system of justice, his own intelligence and defense experts and military leaders even while he found reason to heap praise on despotic foreign leaders who jail their own citizens without trial and assassinate political opponents with impunity; we’ve seen him walk away from international treaties and alliances with friends and embrace enemies; and we’ve been witness to a debasement of American culture and values so astounding that he praises white supremacists, supports accused child molesters and befriends murderers. He bragged that he could shoot someone in the middle of Fifth Avenue and get away with it, and he was right. That isn’t enough?

I turned on MSNBC recently and sat on my couch and watched a so-called “panel” on one of the afternoon shows tear into Joe Biden for two whole segments, lasting almost a half hour, taking him apart because he had the temerity to put his hands on a woman’s shoulders and sniff, or kiss, or something anyway, the back of her head. That Biden was there to support her candidacy for office as a fellow Democrat didn’t matter. Nor did it matter that photographs emerged of the same woman putting her hands on Biden’s shoulders and gripping the arms and shoulders and waists of other male political figures. It didn’t seem to matter that the woman has supported one of Biden’s opponents in the presidential primary, and could have  had a political reason to bring up this alleged offense from several years ago.

Do you think they spent even 60 seconds talking about Donald Trump and his treatment of women? Do you think they mentioned even once that at least 16 women have accused Trump of sexual harassment or abuse? The list is all over Google. It’s not hard to find. Here’s one of them you might glance at the next time you think about taking down Biden or any other Democrat.

I didn’t hear the word “Trump” even once as they went after Biden for the unthinkable crime of putting his hands on a woman’s shoulders.

The same thing goes on practically daily with the other Democratic candidates. Amy Klobuchar is a bad boss! She has raised her voice with Senate staffers! Elizabeth Warren is wonky! She gets all bogged down in details about big banks and financial regulations! Kamala Harris was a meanie prosecutor! She wanted to put parents in jail if their kids skipped school! Jay Inslee is a one-issue candidate who thinks climate change is the only thing we should care about! Pete Buttigieg thinks we should abolish the Electoral College and reform our democracy before we deal with health care and poverty! He called Vice President Pence a “Pharisee!” He’s too gay, or he’s not gay enough, or he didn’t come out at the right time, or something! Beto O’Rourke lost his campaign for senate in Texas! How can we take him seriously as a presidential candidate? He thinks he can roll up his shirt sleeves and stand on diner counters and wave his arms and win! Kirsten Gillibrand sacrificed Al Franken on the altar of her own ambition! She’s wooden! She’s not nice! Joe Biden is too old! He’s prone to “gaffes!” He’s too handsy with women! He’s stuck in the past! Bernie Sanders is a millionaire! He’s too old! He’s too far left! Or he’s not far left enough! He’s still feuding with the Clintonites! Or they’re still feuding with him! Or something!

Let’s see, did I miss any of them? Probably, but it doesn’t matter. Somebody will show up on MSNBC, or in a New York Times front page article, and they’ll attack somebody else. Every day Democrats throw garbage at each other. Every day, MSNBC finds a new “issue” to nitpick a Democrat for. Every day, the media machine grinds up another Democrat. You have the feeling that MSNBC and CNN anchors are sitting there watching their Twitter feeds, waiting for the word “emails” to show up so they can start pounding that drum again. You wait. They’ll catch somebody for a 10-year-old email or a racy text message or a misbegotten tweet. That somebody will be a Democrat, and within moments other Democrats will jump on the story, and you’ll see “campaign strategists” on Katy Tur, or (God help us) Chuck Todd, opining about the damage done, the dive they’ll take in the polls, the difficulty they’ll face with fundraising. Another day, another scandal. Another day, another damaged Democrat.

Down the memory hole went the months they spent pounding on Hillary Clinton for her emails, for her “aloofness,” for her control of the Democratic Party machine, basically for her being a woman, for being Hillary Clinton. Every day has to be Groundhog Day for Clinton as this Democratic primary grinds on. What a fucking shame.

You know what the real shame is? They’re nitpicking the Democrats while Trump puts a torch to the whole damn house. Every day has to be Groundhog Day for him, too. Last time around, he flew around the country and told lies at his rallies as he watched the media peck at Hillary Clinton like ducks, exposing this “scandal” or that “failure.” He didn’t need campaign strategists like Steve Bannon. Hell, he didn’t even need the Russians. The Democratic Party “campaign strategists” flapping their jaws every night on the cable shows were doing the job for him. The New York Times didn’t use the word “lie” until Trump made his lame admission that Barack Obama was a United States citizen. Whoop-de-doo. Meanwhile, Trump’s entire campaign was a lie.

You want four more years of this shit? Four more years of Trump turning the White House into a criminal enterprise? Four more years of racism and gay-baiting and Muslim-hating, and demolition of democratic norms and government institutions and the rule of law? Go on another cable show, pen another op-ed, tweet out another rumor, trash another fellow Democrat.