Notre Dame: writers and the shock of destruction through history 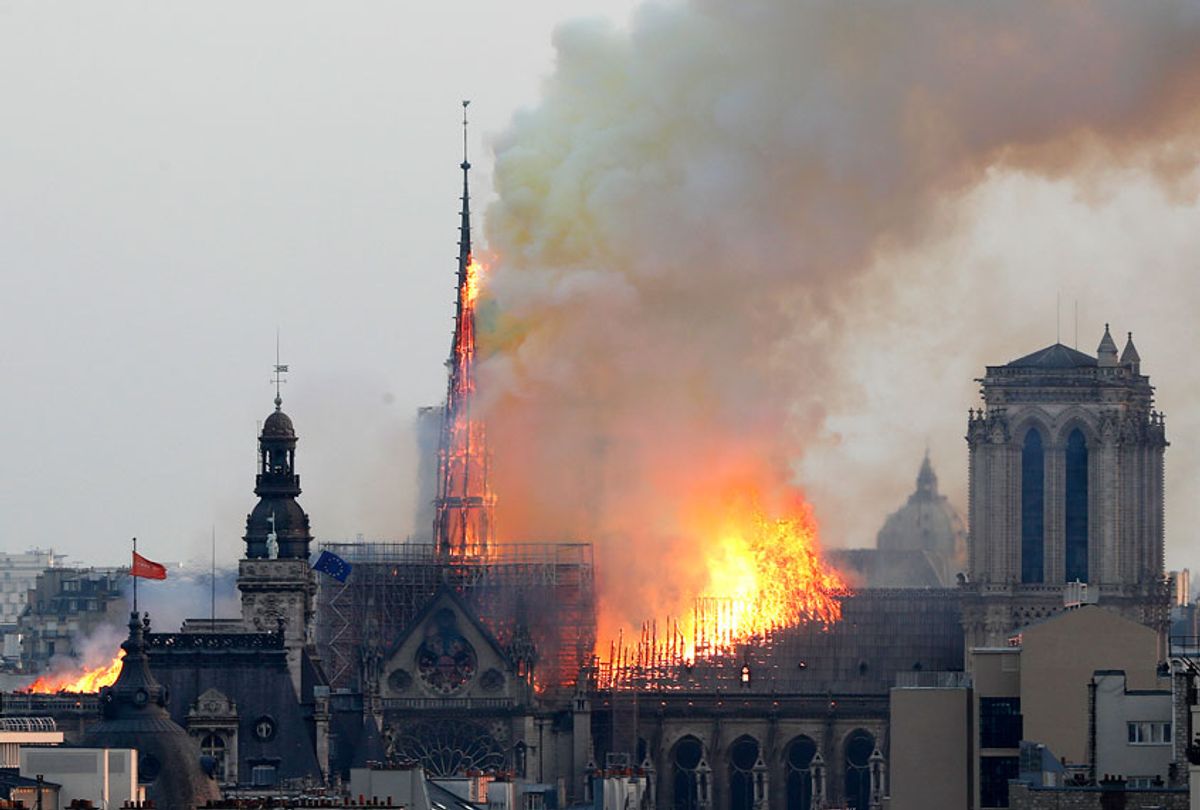 Flames rise from Notre Dame cathedral as it burns in Paris, Monday, April 15, 2019. Massive plumes of yellow brown smoke is filling the air above Notre Dame Cathedral and ash is falling on tourists and others around the island that marks the center of Paris. (AP/Thibault Camus)
--

Images of the skeletal frames of Notre Dame cathedral, enveloped in billowing smoke and flame, stopped us dead on April 15. What is so familiar from thousands of holiday photographs and postcards was suddenly made unfamiliar, strange. The stunned Parisians watching in horror as a staple of their city was destroyed before their eyes brought to mind the faces of New Yorkers watching in disbelief as first one, then another tower came down in 2001, or the faces of Iraqi citizens watching the statue of Saddam Hussein topple in Iraq in 2003.

There are obviously very different political contexts to these events — some acts of terrorism, some natural acts of destruction — but what they share is the strange sense of watching one era of history end in real time: the end of a cultural icon that has stood, in Notre Dame’s case, through so many historical periods.

The many comment pieces we will see throughout the next few weeks will talk about the importance of this fire, not only in literal terms but its place in the cultural imagination — the loss of what the cathedral represents, its symbolic value as much as its literal one.

They won’t be the first. These expressions of cultural loss enter a long and storied tradition. Throughout history we have seen examples of writers and commentators expressing shock, disbelief, horror and awe over buildings disappearing before their eyes; wood and steel structures turning, rapidly and unstoppably to debris; of cities turning to dust.

One of the most famous examples we have is Pliny the Younger writing in a letter about the eruption of Vesuvius in 79 AD:

Ashes were already falling, not as yet very thickly. I looked round: a dense black cloud was coming up behind us, spreading over the earth like a flood. […] We had scarcely sat down to rest when darkness fell, not the dark of a moonless or cloudy night, but as if the lamp had been put out in a closed room.

It is not unlike the physical response that Samuel Pepys recorded in his diary of the 1666 Great Fire of London:

So near the fire as we could for smoke; and all over the Thames, with one’s face in the wind, you were almost burned with a shower of firedrops. … When we could endure no more upon the water; we to a little ale-house on the Bankside, over against the Three Cranes, and there staid till it was dark almost, and saw the fire grow; and, as it grew darker, appeared more and more, and in corners and upon steeples, and between churches and houses, as far as we could see up the hill of the City, in a most horrid malicious bloody flame, not like the fine flame of an ordinary fire … it made me weep to see it. The churches, houses, and all on fire and flaming at once; and a horrid noise the flames made, and the cracking of houses at their ruins. So home with a sad heart.

These writers typically describe the scene they witness and the physical sensations they experience — an attempt to record the physical experience of the event for the historical record. Writing about an event can also be, in some cases, a form of reliving or reenacting it, especially if the event was personally traumatic.

Edith Wharton wrote in similar terms about the devastation she witnessed on her trips to the war zones during World War I for articles written for Scribner’s Magazine in 1915, published later as Fighting France:

Ypres has been bombarded to death, and the outer walls of its houses are still standing, so that it presents the distant semblance of a living city, while near by it is seen to be a disembowelled corpse. Every window-pane is smashed, nearly every building unroofed, and some house-fronts are sliced clean off, with the different stories exposed, as if for the stage-setting of a farce.

Wharton’s comparison with the theatrical is not untypical. We can see a similar sense of the unbelievable, the farcical, in John Updike’s response to 9/11 in The New Yorker of September 24 2001:

As we watched the second tower burst into ballooning flame … there persisted the notion that, as on television, this was not quite real; it could be fixed; the technocracy the towers symbolised would find a way to put out the fire and reverse the damage.

There is also, of course, in all of these writers a fear for the self, even if we know the self is not in danger: “We knew we had just witnessed thousands of deaths; we clung to each other as if we ourselves were falling,” Updike writes.

The particularly strange sense of spectacle that accompanies the modern destruction of landmarks means the moment can be eternally replayed, as images become iconic.

This can link spectacle with mourning, as visual culture theorists such as Marita Sturken have noted.

Wharton, writing about the destruction of the Cathedral of Rheims in 1914 — another Notre Dame — found beauty in its strange ruins:

When the German bombardment began, the west front of Rheims was covered with scaffolding: the shells set it on fire, and the whole church was wrapped in flames. Now the scaffolding is gone, and in the dull provincial square there stands a structure so strange and beautiful that one must search the Inferno, or some tale of Eastern magic, for words to picture the luminous unearthly vision. […] And the wonder of the impression is increased by the sense of its evanescence; the knowledge that this is the beauty of disease and death, that every one of the transfigured statues must crumble under the autumn rains, that every one of the pink or golden stones is already eaten away to the core, that the Cathedral of Rheims is glowing and dying before us like a sunset…

There may be either sadness or comfort in knowing that our sensations today of something having been irreplaceably lost, of the destruction of culture and of part of ourselves, is not new.