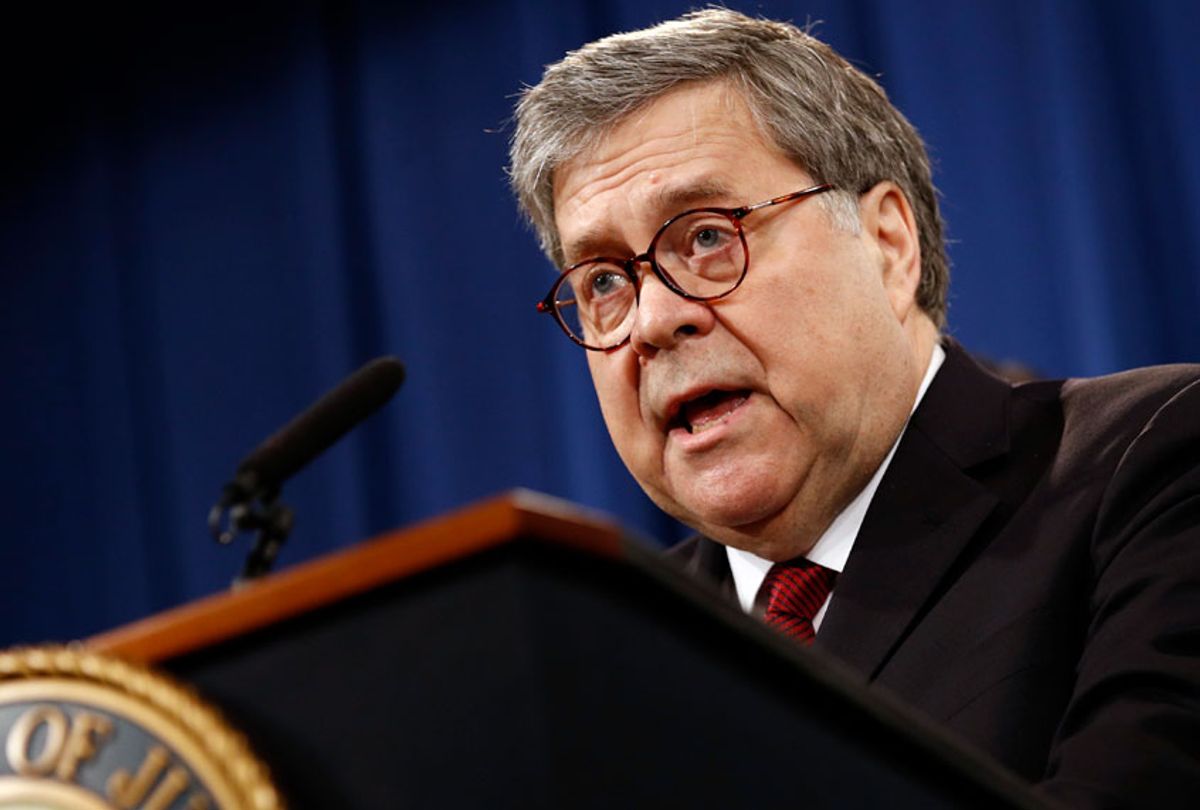 Ahead of the release of a redacted version of special counsel Robert Mueller's nearly 400-page report detailing his nearly two-year investigation into foreign interference in the 2016 presidential election, Attorney General William Barr said ten documented episodes involving President Donald Trump and "elements of an obstruction offense" were not illegal.

Barr revealed that both he and his deputy, Rod Rosenstein, "disagreed with some of the special counsel's legal theories and felt that some of the episodes did not amount to obstruction as a matter of law," although they accepted Mueller's "legal framework."

Barr described the president's personal strife in detail, leading one reporter at the press conference to ask why he appeared to express sympathy toward his situation.

"In assessing the president’s actions discussed in the report, it is important to bear in mind the context," Barr said. "President Trump faced an unprecedented situation."

"As he entered into office and sought to perform his responsibilities as president, federal agents and prosecutors were scrutinizing his conduct before and after taking office and the conduct of some of his associates," he continued. "At the same time, there was relentless speculation in the news media about the president's personal culpability. Yet, as he said from the beginning, there was in fact no collusion. And as the special counsel’s report acknowledges, there is substantial evidence to show that the president was frustrated and angered by a sincere belief that the investigation was undermining his presidency, propelled by his political opponents and fueled by illegal leaks."

CBS News White House Correspondent Paula Reid questioned Barr about remarks that “quite generous to the president, including acknowledging his feelings and his emotions."

"So what do you say to people on both sides of the aisle who are concerned you are trying to protect the president?” Reid asked Barr.

“It just seems like there is a lot effort to say – to go out of your way to acknowledge how this was difficult for him,” she added.

“Is there another precedent for it?” Barr responded.

After Reid acknowledged there was not one, Barr asked her, "So unprecedented is an accurate description, isn't it?"

Barr held a press conference at 9:30 a.m. ET before handing over the report to the chairman and ranking members of the Senate and House Judiciary committees at 11 a.m. ET. The document was posted on the Justice Department's website for the public shortly thereafter.

He said Mueller's report reveals how Russian operatives sought to interfere in the 2016 presidential election.

"The Russian government sought to interfere in our election process," Barr said, adding the special counsel found "no collusion" – the president's signature response to the Mueller probe – between Russians and any Americans.

The attorney general said that while Mueller's team "investigated a number of links or contacts between Trump Campaign officials and individuals connected with the Russian government," they found no evidence of collusion.

"After reviewing those contacts, the special counsel did not find any conspiracy to violate U.S. law involving Russia-linked persons and any persons associated with the Trump campaign," Barr said.

He also said Mueller's report details Russian efforts to hack into computers and steal documents and emails from the Democratic party and Hillary Clinton's campaign in an aim to "eventually publicizing these documents."

Officials at the Justice Department had "numerous" conversations with White House lawyers about the conclusions drawn by Mueller in recent days, the New York Times reported Wednesday night. The talks "aided the president's legal team as it prepares a rebuttal to the report and strategizes for the coming public war over its findings," the newspaper noted.

Barr said Thursday that the report contains only "limited redactions," none of which were the result of executive privilege.

"As you will see, most of the redactions were compelled by the need to prevent harm to ongoing matters and to comply with court orders prohibiting the public disclosure of information bearing upon ongoing investigations and criminal cases, such as the IRA case and the Roger Stone case," Barr said.

The redactions were "applied by Department of Justice attorneys working closely together with attorneys from the special counsel's office, as well as with the intelligence community and prosecutors who are handling ongoing cases. The redactions are their work product," he added.

Barr said the decision "whether to assert executive privilege over any portion of the report rested with the president of the United States," adding that the president decided he would not assert that privilege.

"Accordingly, the public report I am releasing today contains redactions only for the four categories that I previously outlined, and no material has been redacted based on executive privilege," the attorney general said.

Barr added that the president's lawyers did not request or were permitted to make any redactions.

"The president’s personal lawyers were not permitted to make and did not request any redactions," he said. "No one outside this group proposed any redactions, and no one outside the department has seen the unredacted report, with the exception of certain sections that were made available to IC, the intelligence community, for their advice on protecting intelligence sources and methods."

The attorney general also revealed a group of bipartisan lawmakers from several congressional committees would see a version of the report without redactions, with the exception of grand jury information.

"Nevertheless, in an effort to accommodate congressional requests, we will make available to a bipartisan group of leaders from several congressional committees a version of the report with all redactions removed except those relating to grand-jury information," he said.

Trump, for his part, has reportedly floated the idea of holding his own press conference after the attorney general's briefing. The information the Justice Department has provided the White House could potentially be valuable to the president's legal team as it finalizes a rebuttal to the report.

Speaking to veterans at the White House after Barr's press conference, Trump said, "I'm having a good day, too. It's called, 'No collusion, no obstruction.' There never was, by the way, and there never will be."

The discussions between Justice Department officials and White House lawyers have added to questions about the propriety of the decisions made by Barr since he received Mueller's findings late last month. The attorney general set off a political firestorm after he released a four-page summary of the special counsel's report to Congress, in which he indicated that Mueller had not found evidence of criminal collusion or conspiracy between Trump's presidential campaign and Russia during the 2016 election. In his summary Barr noted that while Mueller's report "does not conclude that the president committed a crime, it also does not exonerate him." Trump has praised Barr's review, claiming it to be a "total and complete exoneration."

Earlier on Thursday, Trump railed against Mueller's investigation, writing on Twitter, "PRESIDENTIAL HARASSMENT! The Greatest Political Hoax of all time! Crimes were committed by Crooked, Dirty Cops and DNC/The Democrats."

Democrats dismissed Barr's summary of Mueller's report, arguing it is both incomplete and insufficient. They have zeroed in on Mueller's decision to punt on whether Trump had obstructed justice, which Barr claimed "leaves it to the attorney general to determine." Barr said he and Rosenstein determined Mueller's findings were "not sufficient to establish that the president had committed an obstruction-of-justice offense," which Democrats in turn said warrants further examination and the release of the full report. Even some prosecutors who worked for Mueller claimed Barr did not adequately represent their findings, telling associates the report was more damning for Trump than Barr indicated.

"I have said, and I'll say again, 'No thank you, Mr. Attorney General. We do not need your interpretation. Show us the report, and we can draw our own conclusions. We don't need you interpreting for us,'" Pelosi said at a recent news conference. "It was condescending, it was arrogant and it wasn't the right thing to do. The sooner they can give us the information, the sooner we can all make a judgment about it."

Rep. Jamie Raskin, D-Md., a senior member of the House Judiciary panel, said Barr's refusal to release Mueller's full report "seems like the smell of whitewash and a cover-up is getting thicker and thicker."

"We need to know what happened, and we need to correct the record," he added. "Because all we have right now is that four-page press release that the attorney general put out at the beginning of the week."

Barr's refusal to provide Congress with the full report — and his statement to senators last week that he believed "spying did occur" against the president's 2016 campaign — pointedly declined to refute charges that Mueller's investigators were engaged in a "witch hunt."

The president, who stepped up his attacks in recent days amid the imminent release of the Mueller report, has long claimed that alleged anti-Trump bias at the FBI and the Justice Department spurred federal investigations into his campaign's alleged ties to Russia during the 2016 election, demanding those intelligence officials be investigated themselves. Barr recently indicated his intention to investigate the origins of Mueller's probe, as well as various counterintelligence decisions made by FBI and the Justice Department officials, bolstering some of the president's allies who have vowed to expose a "deep state" conspiracy that claims there is a covert network entrenched inside the government working to undermine Trump.

Barr's plans to black out sensitive information in the report have drawn condemnation, particularly from Democrats who have demanded they be permitted to read the entire report and insisted the attorney general's judgment is not the final word. The top law enforcement official previously identified four areas of information that would be redacted: grand jury material; information that could "compromise sources and methods" used in intelligence gathering; findings that could jeopardize ongoing investigations; and anything that would "unduly infringe on the personal privacy and reputational interests of peripheral third parties" associated with the investigation.

The attorney general is not required by the regulations governing the special counsel to share the report with the public or notify lawmakers of more than "brief notifications, with an outline of the actions and the reasons for them." Barr's defenders will likely say he fulfilled the pledges of transparency he made during his confirmation hearings to make as much of the document public as possible.

Democrats on the House Judiciary Committee plan to subpoena the Justice Department as early as Friday for all of Mueller's findings, as they brace for a lengthy legal battle against Trump's administration for access to the full report in the wake of Barr's anticipated redactions.