The new podcast "Self? Help!" asks bestselling authors about the one book that helped them out in a pivotal time 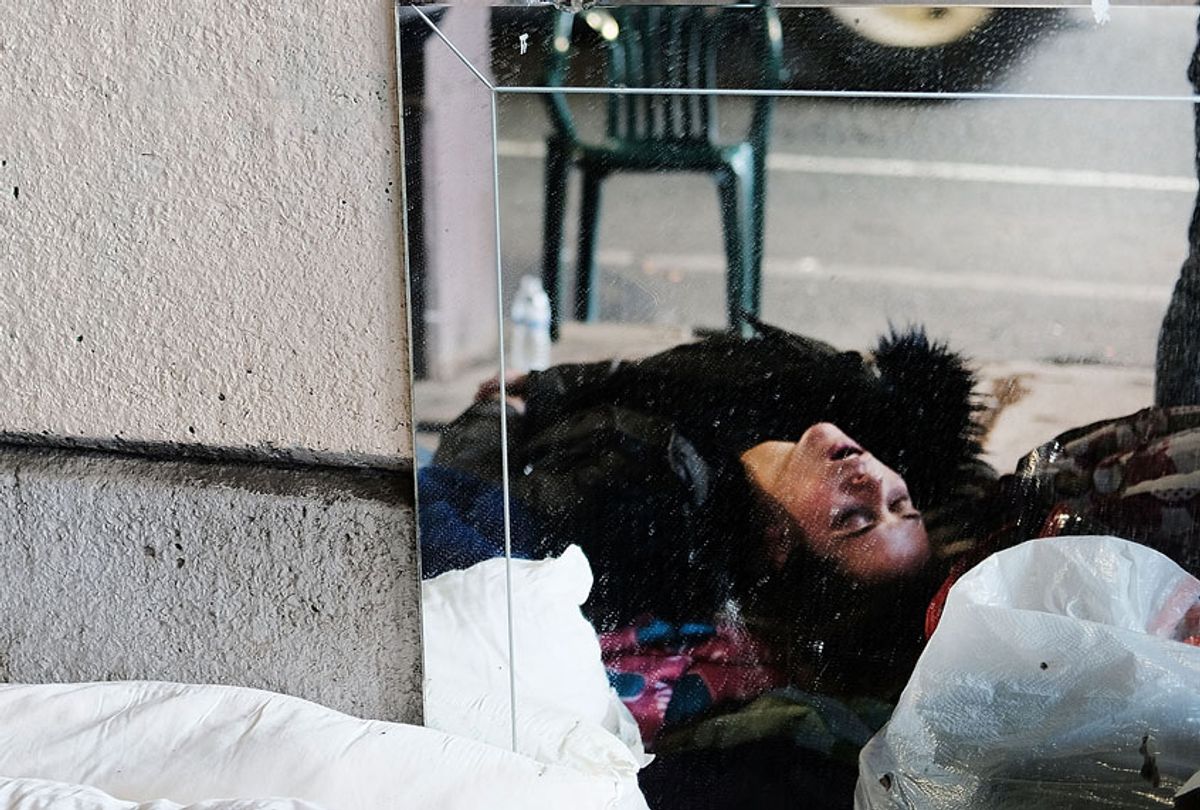 A woman, passed out on heroin, is reflected in a mirror under a bridge where she lives with other addicts in the Kensington section which has become a hub for heroin use on January 24, 2018 in Philadelphia, Pennsylvania. (Getty/Spencer Platt)
--

Have you ever thought: Who am I? What the hell am I doing? And how did I get here of all places? Probably at some point in your life, if not on a daily basis, you’ve asked yourself these questions. And if you’ve ever turned to the bookshelves for your answers, the new podcast "Self? Help!" is for you. For Season One, I asked best-selling authors the story behind the book that helped them navigate a pivotal moment in their life.

The book that helped Johann Hari was one he stumbled upon in the stacks of the Senate library in Washington, D.C.

“I found a book that almost vanished as far as I could tell called 'Drug Addicts are Human Beings,'" said Hari.

He pulled this book out from oblivion on his quest to understand the War on Drugs, which is over 100 years old. The book was written by a doctor, Henry Smith Williams. Published in 1938, this was a book that told the future.

“'Drug Addicts are Human Beings' is an eerie book because you read it and you see that there was a man who saw everything that was coming down the line. He saw exactly what the drug war would mean. He saw it exactly, how many people it would kill. He saw that there was an alternative that would save their lives,” says Hari. “These were insights that were widely known and that were systematically destroyed and dismantled.”

And they were systematically destroyed and dismantled primarily by one man: Harry Anslinger.

“I think if you want to understand why the drug war started, and why it continues today, it's really important to understand this man: Harry Anslinger," says Hari. "I think [he's] the most influential person who hardly anyone's ever heard of.”

In the 1930s, these two men — Dr. Henry Smith Williams and bureaucrat Harry Anslinger — were at odds with one another about how to deal with the problem of addiction.

“One of things that was so shocking, looking at the early history of the drug war, was to realize, oh, this was massively contested,” says Hari. “This did not just slide into history. There was a huge fight about whether this thing was ever going to happen, and it could have gone the other way.”

Before Johann Hari even knew these two men existed, he had a similar conflict in himself. He could relate to both the bureaucratic judgment through which Anslinger saw drug addicts and the empathy at the heart of Henry Smith Williams’s book, “Drug Addicts are Human Beings.”

“This was a really personal journey for me,” says Hari. “One of my earliest memories is of trying to wake up one of my relatives and not being able to, and I was too small then to understand why, or what was going on. But as I got older, I realized we had drug addiction in my family.

"Like a lot of people in that position, I felt really conflicted. If you're really honest, if you love someone who's got an addiction problem, there's a part of you that is really angry and looks at that person and thinks: I wish someone would just stop you. Why are you doing this thing?" he continued. "And then there's another part of you that's like: I can see the anger doesn't help you. In fact, it makes the problem worse. I can see that you're doing this because you're in terrible psychological pain. How can I help?  And I was really torn — not even torn, I was oscillating between those two impulses. I didn't know what to do. And I couldn't really find the answers in what I was reading. So one way of resolving an internal conflict is to go on a journey out into the world and see these different impulses in you being acted on.”

“And that's exactly what Johann did," Hari added. "He took a journey around the world to better understand how addiction was treated in different places. But before he interviewed doctors and addicts, experts and hitmen, Johann wanted to understand the origins of the drug war. How did we get here? And when he read through the early Congressional testimonies that were trying to determine the fate of drug enforcement in the U.S., it became clear to him that one voice dominated the conversation: Harry Anslinger."

To hear where Johann’s journey took him and how the book “Drug Addicts are Human Beings” changed his perspective on addiction, please listen to Episode 2 of “Self? Help!”