Mufleta: Why one of the best parts of Passover is when it is over

Mufleta is best eaten hot. Serve it with lots of butter and honey. 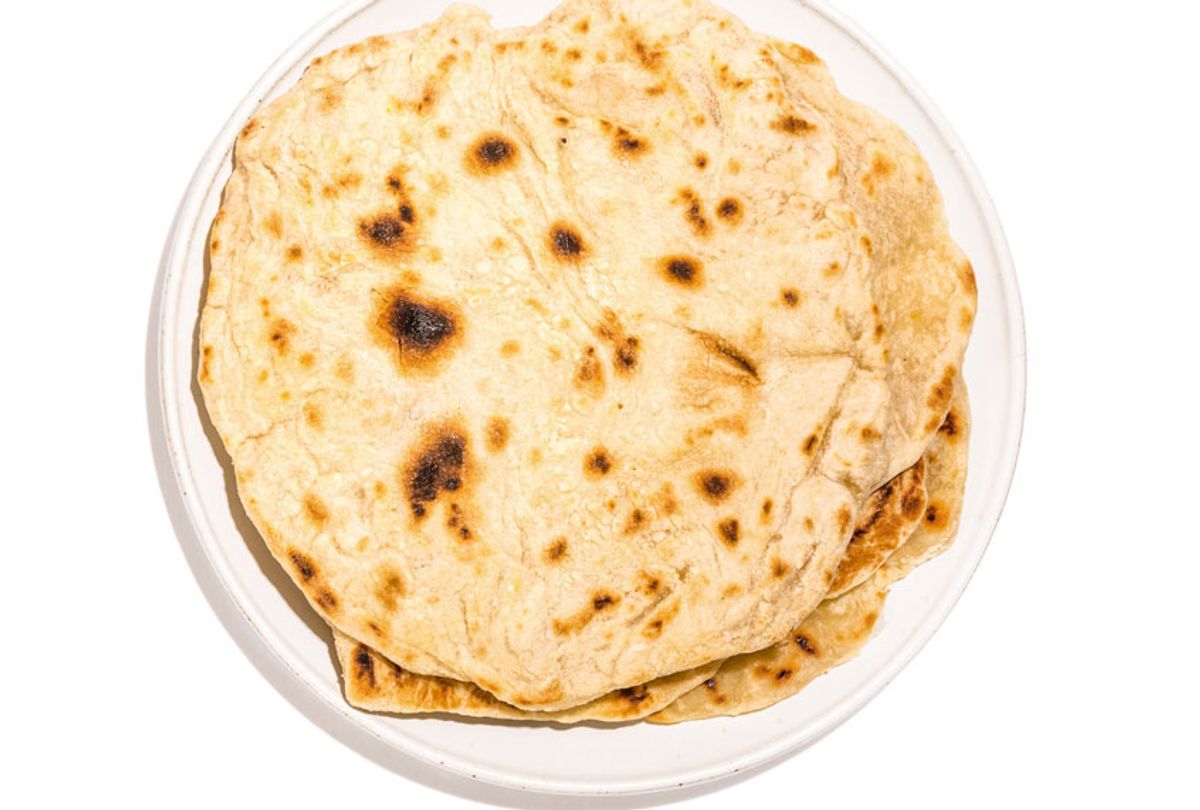 Essays by Gabriel Stullman and Lara Rabinovich and recipe by Uri Scheft are excepted from The 100 Most Jewish Foods by Alana Newhouse (Artisan Books). Copyright © 2019.

The best part of Passover is when it’s over.

When I was growing up, Passover was dominated by my mother’s side of the family, extremely observant Sephardic Jews from Morocco. My mom believed Passover was a holiday absolutely worth staying home from school for, though mostly so we could help clean the house of chametz—she gave my siblings and me toothbrushes to get into the corners of the carpet. The Seder always started with my grandfather Joseph and his wife, Perla—the “Joseph” of my restaurant Joseph Leonard and the “Perla” of my old restaurant Perla Cafe. Everyone wore caftans and djellabas. Each passage of the Haggadah was read in Hebrew, with Sephardic rhythms and Moroccan songs. There was a break after every single passage for debate, which took place in several different languages.

We kept kosher, so I always brought my own lunch to school. But my brown-bag lunches that week were different. Even my Jewish friends couldn’t believe it: “Your mom makes you eat matzo all week?” And let me tell you: Eating a peanut butter and jelly or turkey sandwich with matzo is a hot mess.

But finally, when the sun set on the last day of Passover, it was time for Mimouna—which meant it was time for fun. And not only because I was at that point very sick of matzo. My grandmother would come over, and she and my mom would make all these different Moroccan pastries, filled with dates, prunes, and pistachios. But the highlight of Mimouna was always mufleta.

The best way to describe mufleta is as a thicker crepe or blintz. It’s not quite as thick as naan or as bready as pita. It’s a bit like a tortilla, except puffier. Think of Neapolitan pizza and the blackened, crisp, burnt part under the crust. The perfect mufleta is thirty seconds away from that pizza—right before it turns black.

My mom and my grandmother rolled out the dough, threw it in a cast-iron skillet, and cooked it until it blistered. They stacked the mufleta like pancakes and covered them with a big kitchen towel for later, when they’d be warm, spongy, and a little bit oily from all the butter. That was the secret: all the butter. (Every time you finish cooking one, you add butter, so that when you put the new dough in, it oils up the bottom half.)

And then there were the fillings. The most popular were apple and honey, of course—lavender-infused honey, chamomile-infused honey. Then you’d line the mufleta with apples or bananas. My mom made a chocolate spread similar to Nutella, and I’d spoon that in. And that was the meal. You would just eat sweets for an entire dinner.

I have all these great memories of just stuffing my face with mufleta, and they came rushing back to me last year. My wife and I were invited to eat at Per Se, and the pastry chef, Anna Bolz, wanted to do something to surprise us. She had James Lauer, the general manager at our restaurant Fairfax, get in touch with my sister for recommendations. My sister told James about mufleta. Anna looked it up online, studied the principles of the dish, and made an entire mufleta dessert course at Per Se. It was like that scene in Ratatouille when the critic takes the bite of ratatouille and gets zapped back to being a kid. That happened to me. I literally cried in the restaurant.

Items symbolizing luck are central to Mimouna, and the festive table is decorated with “an array of symbols that are basically variations on a theme,” explains Israeli historian Yigal Bin-Nun. Some families display a whole fish—even alive, swimming in a bowl of water—on the Mimouna table as a sign of good fortune, and also because the holiday is said to fall on the day when God parted the Red Sea for the Israelites to cross to freedom. Foods are often served in numerical groupings, such as seven green pea pods dotting a plate of flour to symbolize fertility and renewal. In some homes, Hanukkah gelt–like gold coins are strewn across the table.

Though the festival’s name is often thought to refer to the twelfth-century’s Rabbi Maimon (the father of Maimonides), Bin-Nun has uncovered folkloristic songs and historic sources that link it to the rituals of the Gnawa, a Sufi sect in Morocco whose adherents pray yearly through songs, parades, and ecstatic dancing to the goddess of luck, Mimouna. Sure enough, Bin-Nun says, during Jewish Mimouna celebrations, “songs are sung in honor of ‘Lady Luck.’ One of them is ‘Lala mimouna/mbarka masuda,’ which means ‘Lady Mimouna/lucky and blessed.’” The Arabic word mimoun also means “luck” or “good fortune.”

Today in Israel, Mimouna is considered more or less a national party, and Israelis will point to its celebration as an example of peaceful relations not only between Sephardim and Ashkenazim but also between Muslims and Jews. After all, the culinary traditions of the holiday originate with Arab and Berber families who lent flour and yeast to their Jewish neighbors following sundown after Passover. In return, Moroccan Jews are said to have either given them the remainder of their matzo or opened their homes and eaten their first baked goods together—a tradition still maintained with Moroccan Jews leaving their front doors open on Mimouna eve.

Combine the water and yeast in the bowl of a stand mixer and whisk by hand until the yeast is mostly dissolved. Add the flour, sugar, and salt. Fit the dough hook on the mixer and mix on low speed until the dough comes together into a semismooth ball, about 2 minutes.

Transfer the dough to a lightly floured work surface. Stretch one corner of the dough out and fold it on top of the middle of the dough. Give the dough a quarter turn and repeat a few more times, until each corner has been stretched and folded twice to make a nicely shaped ball.

Lightly flour a large bowl and set the dough in the bowl; sprinkle the top with a little flour, cover the bowl with plastic wrap, and set aside at room temperature until the dough has nearly doubled in volume, about 30 minutes.

Pour 3 cups (720 milliliters) of the oil into a large bowl and set it aside. Lightly flour your work surface and set the dough on top. Pat and stretch the dough into an 8 by 12-inch (20 by 30-centimeter) rectangle that is as even as possible. Use a bench knife to divide the dough lengthwise into 4 equal strips, then into 6 strips crosswise, to yield 24 pieces. Holding one piece of dough in your hand, stretch one-quarter of the piece up and over onto the middle. Repeat with the other three sides to create a rough ball shape. Place the dough, seam-side down, on your work surface and repeat with the remaining pieces.

Wipe the excess flour from your work surface and cup your hand around a piece of dough. Push and pull the dough in a circular motion on the work surface until it is rounded into a tight ball with hardly a seam on the bottom. Drop the dough ball into the bowl of oil. Repeat with the remaining dough. Add more oil to the bowl as needed to make sure the dough balls are completely covered; you don’t want them to dry out. Let them rest in the oil for 10 minutes.

Set a dough ball on your work surface. Using your hands, stretch and push it into a paper-thin sheet (try not to create holes, but if you get a few, it’s OK). It should stretch very easily. Heat a large nonstick skillet over medium-high heat. Reduce the heat to medium and carefully lay the dough sheet in the pan. While the first piece of dough cooks, stretch another piece of dough. Once the dough in the skillet starts to turn golden brown, about 2 minutes, use a spatula to carefully flip it over. Lay the second sheet of stretched dough on top of the first in the skillet. Stretch your next piece of dough. When the bottom of the dough in the pan is golden brown, 2 to 3 minutes more, carefully flip the two layers over together and place the just-stretched piece on top of the stack. Repeat this process, stretching, flipping, and adding to the dough stack, until all the dough pieces are stacked in the skillet like a giant flatbread layer cake. While you work, adjust the heat as needed so the sheets don’t get too dark. Remove the stack from the skillet and place it on a large plate.

Mufleta is best eaten hot. Serve with lots of butter and honey. To eat, peel away a layer of mufleta, add a smear of butter and a drizzle of honey, and roll it into a cylinder.

Alana Newhouse is the author of "The 100 Most Jewish Foods" from Artisan Books.