Smart Watch: "Ramy" blesses us with a thoughtful, funny comedy about goodness

Ramy Youssef's Hulu series is the first of its kind, as worth your time as "Gentleman Jack," another singular show 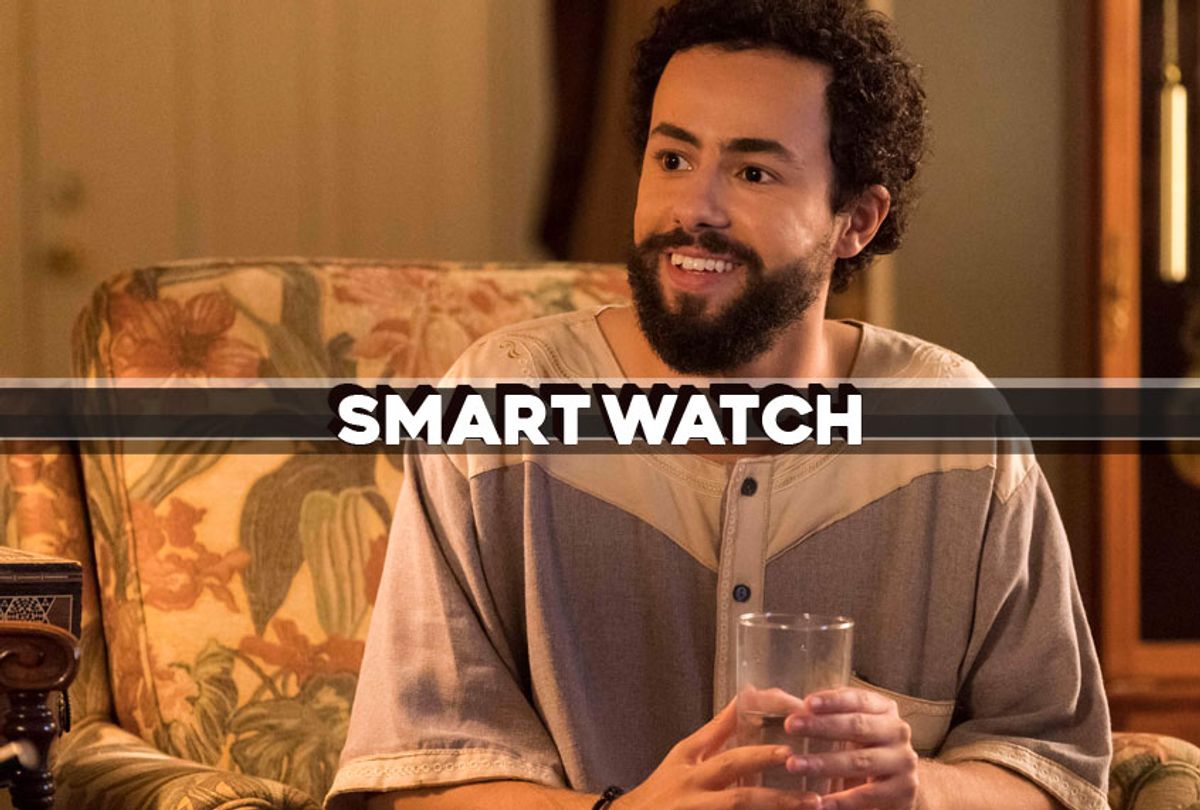 A classic “Seinfeld” episode shows Jerry complaining about a man who has recently converted to Judaism “purely for the jokes.” The context itself is part of the set-up: the man Jerry is kvetching to is a Catholic priest, and they’re huddled inside a confessional. The priest asks Jerry if this offends him as a Jewish man. Jerry answers, “No, it offends me as a comedian.”

Watching the opening moments of “Ramy,” Hulu’s 10-part series created by comedian Ramy Youssef, highlights how much we as an audience take for granted when it comes to the intersection of religion, culture and comedy. Jewish performers are amply represented in the history of modern entertainment, as are Christian comics of various denominations.

Whereas it’s understood that nobody coverts to Islam for the jokes. What little we understand about the faith and the people who practice it is associated with solemnity, if not severity — or, even more likely, suspicion.

Television abounds with heartwarming sitcoms and other half-hours about Jewish and Christian families where faith is part of the storytelling fabric. Whereas thanks to “Homeland,” “24” and a slew of theatrical releases reaching back prior to 9/11, Muslims are often represented as glowering auxiliary characters with little personality development. Even the consciously written “good” Muslim characters are written as serious men and women struggling for validation and acceptance, and are rarely shown experiencing moments of pure levity.

And this makes the initiation into the first episode of “Ramy” particularly special: Youssef’s character, also named Ramy, brings us inside a mosque to witness him standing in line prior to Friday prayer service, where he waits to perform his purifying ablutions at the communal washbasin.

But the men in front of him are comically thorough, and Ramy is an impatient man in his 20s. So he attempts to circumvent the whole business and get the job done in a way that makes sense to him. But again, this is a comedy, which means Ramy eventually ends up with an irritated community elder manhandling his feet. Appropriately, the episode is titled “Between the Toes.”

Opening “Ramy” with an uncomfortable if hilarious gag taking place in a setting few non-Muslim viewers would associate with comedy enables these scenes to double as a clever mission statement for the show itself.

This isn’t a comedy about a comedian; Youssef intentionally distances himself from his real-life occupation, in fact. It’s not set in a big city, but a relatively small community in New Jersey.

And in this way and others, Youssef’s character — who, like him, is a first-generation Egyptian-American — resembles any young man of his age doing his best to figure out his place in the world.

Of highest importance is Ramy’s faith, which Youssef portrays as a central pillar of his identity. Ramy embraces his faith . . . well, mostly. He abstains from drinking alcohol, but engages in premarital sex with women outside of his community and religion.

This just makes him a standard millennial in some respects, particularly in the view of his fellow Muslim friends Ahmed (Dave Merheje) and Mo (Mohammed Amer), who are a little looser in their views of imbibing spirits and actually find it weird that Ramy is so insistently straight-edged — and that he hasn’t found a wife yet.

The contemplative air that “Ramy” breathes may remind a viewer of other artistic, ruminative comedies such as “Atlanta” and “Master of None.” Like those shows, the blessing of Youssef’s series, which he executive produces alongside Jerrod Carmichael and showrunner Bridget Bedard,  a "Transparent" alum, is the insistent focus on Ramy’s existential journey, particularly as it is impacted by his relationships with the people around him.

This voyage is intimate and expansive, taking the title character into unexpected places (a few of them alarmingly unwise), even crossing the globe to allow him to connect to his roots. Concurrently this also enables Youssef to interrogate the romanticizing of such pilgrimages. Because if Ramy is viewed as an outsider within his own country, he also wakes up to a few shocking realities about how his Egyptian side of the family views America and Donald Trump.

Youssef, who writes five of the first season’s 10 episodes, is generous in developing the identities of the characters who make Ramy who he is and wisely adds facets to his own character via other’s reflections. Youssef isn’t usually the funniest person in every situation in “Ramy”; that honor frequently goes to his close companion Steve (Steve Way, who is close friends with Youssef in real life), who has muscular dystrophy and a harsh sense of humor that spares no one.

He somewhat confuses his parents Maysa (Hiam Abbass) and Farouk (Amr Waked), who don’t understand why he abandoned a more lucrative professional path that his parents expected of him. But they appear to be more patient with him than his college-aged sister Dena (May Calamawy), who chafes at the double standards imposed upon her because she’s a woman.

Ramy’s insistence in figuring out who he is and where he wants to go in life, however, creates a sustaining tension that becomes the show’s spine. And Youssef covers miles of ground in these first episodes of “Ramy,” inviting the audience to connect with his character and community with laughter initially, before gently allowing the punchlines to fade into the background as the story takes on deeper substance.

We soon come to understand that he’s merely one seeker in a world full of them. Two of the strongest episodes of the season turn the focus on Dena and her halting efforts to break free of parental expectations, and the quiet loneliness of Maysa, into whom Abbass pumps every ounce of ache and yearning she can muster to create a haunting if loving portrait.

A great deal of weight will likely be placed on “Ramy” because of its singular means of representing a marginalized and often demonized religious group in a way that leads with joy and humanity.

Through Maysa, Dena and everyone else, “Ramy” becomes a complex and satisfying entry into lives that aren’t often invited to occupy time and attention on the center of the stage.  But Youssef and his team also make it obvious that this is one man’s experience, witnessed by one unique set of family and friends who carry their own collective and personal histories. It leaves nothing to fear, only a desire to convert curiosity into understanding and perhaps, at the end of the season, something like love.

Usually this space is reserved for celebrating new shows or calling hour fresh hours of returning ones. However, consider how few non-confectionery Easter traditions remain intact in the modern age. Without question our viewing choices have changed dramatically since many folks were forced to wear short pants and pastel dresses on this Sunday of Sundays, regardless of whether our parents were devout or Occasional Christians Mostly In It For the Candy/Jewish for the Jokes.

In either case, it’s damn extraordinary that in 2019 a major broadcast network would play any long-running film in its entirety, let alone one from 1956, even if it stars Charlton Heston, Yul Brynner, Anne Baxter and Vincent Price, among a host of other classic film stars who left us long ago. Is it an American treasure? Of course. It also runs for four hours and 44 minutes.

ABC has parted the schedule for Cecil B. DeMille’s classic almost every year since 1973 — the exception being in 1999 — and it doesn’t intend to halt that tradition as we flirt with the End of Days. So hydrate well, ye heathens, and gaze upon this long-ass but Passover- or Easter-appropriate journey to the Promised Land for as long as you can.

On the opposite end of the spectrum is this delightful series created, written and co-directed by Sally Wainwright (whose previous work includes “Happy Valley”) and starring Suranne Jones as Anne Lister, an adventuress who strides through 19th century Europe with precisely zero Fs to give about what anyone thinks about her style, her sexuality or her ambition.

But when circumstances force her to return to her “shabby” family’s West Yorkshire estate to help get their financial house in order, her entrepreneurial knowledge and swaggering confidence shock the locals. Her home, Shibden Hall, requires tending to on a number of fronts, not the least of which requires her to lay claim to coal mines others have been illegally using to expand their wealth.

As much as that raises the hackles of fellow male landowners who realize they are not contending with a retreating member of the so-called “gentler sex,” her other plan, which involves bedding and wedding a local heiress (Sophie Rundle), isn’t likely to meet any less resistance.

Wainwright grants “Gentleman Jack” a similar strut to other period pieces presented with a modern flair, employing smash cuts of scenes with Jones behaving as civilly as possible against quick glimpses of her seducing lady lovers as a means of conveying the power of her charm as charisma.

Jones sells her attractiveness easily and, reminiscent of the narration method used on “Fleabag,” lets the audience in on her saucy plans by casually breaking the fourth wall and speaking directly to us.

Gemma Whelan plays the heroine’s stodgy killjoy of a sister Marian with an intentionally cartoonish stiffness, which only makes Jones’ performance more appealing. Wisely the production draws influence from the sheer audacity of the real-life figure’s fearlessness; according to HBO the real Anne Lister kept extensive, detailed diaries whose secrets were concealed by a secret code.

Romping through the first couple of hours is enough to make a person glad someone figured out what she was saying, although it takes far less time for the viewer to root for Ms. Lister to achieve her aims, impossible though the time makes that seem to be.

And as if one needs to be reminded…

With the banners called and reunions completed, the 58-minute second episode (written by Bryan Cogman, directed by David Nutter, and title yet to be revealed) can ostensibly get down to the business of preparing for battle.

Photos released this week show Lyanna Mormont, the Lady of Bear Island, armored for battle, and Tyrion Lannister preparing for the worst as best he knows how, with goblet in hand. For whatever reason Gilly and little Sam are there too, but nobody looks like they’re in a partying mood.

But it also looks as if the episode will deal with any outstanding grudges straightaway, with Jaime Lannister standing before the North’s men in the Great Hall of Winterfell and Bran looking . . .  however it is that Bran looks these days.

Suffice it to say, here’s hoping this episode gets the flame closer to the wick. Time grows short and in the real world, summer is coming.