Rethinking Easter through Paul the Apostle: Why evangelicals get it wrong

Beyond a mean-spirited, transactional understanding of Jesus' death on the cross lie richer, deeper meanings 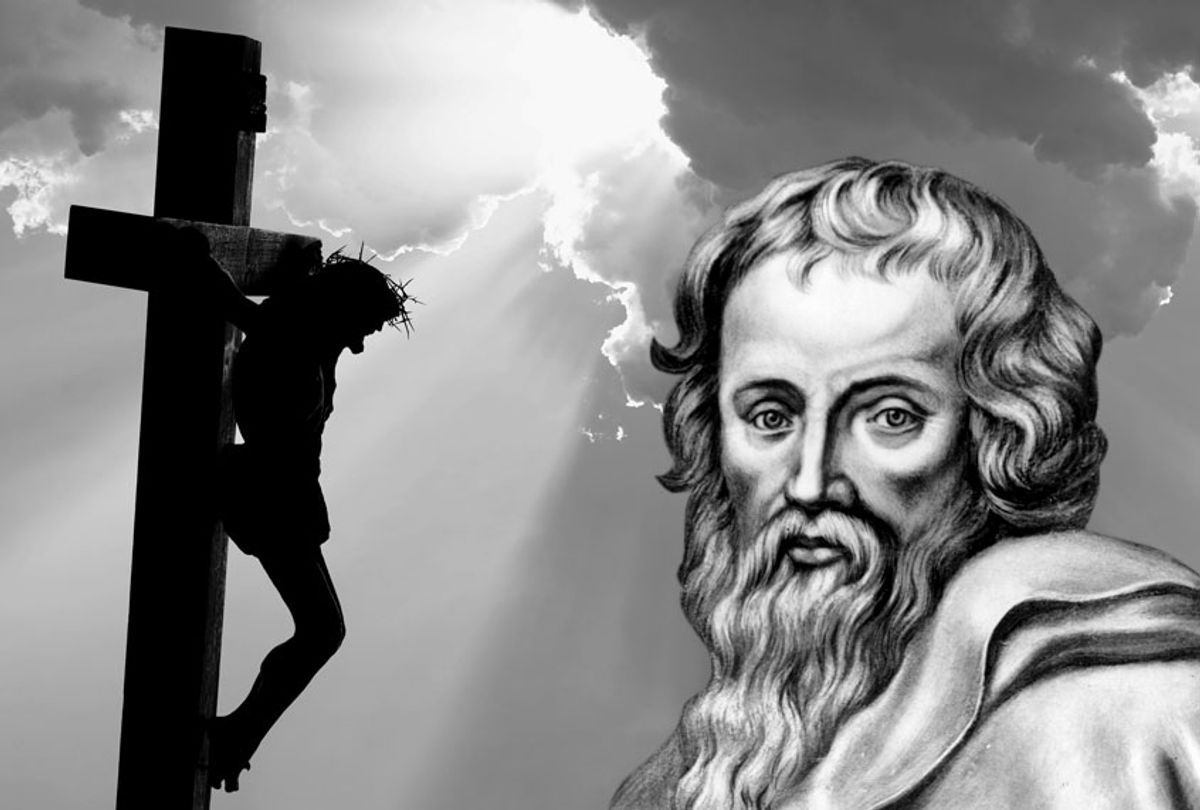 Every year at Easter, my mind turns to Paul. That may seem odd; but Paul was, in effect, the inventor of Christianity, the founding theorist of the new religion. He was a brilliant, quirky and doubtless exasperating man who caught in his mind and passionately held the idea of the Christ as a cosmic figure who would transform history, establishing a new heaven, a new earth. This fresh creation would become the Kingdom of God, and it would be a timeless and wonderfully inclusive place, where “all of Israel will be saved” (Romans 11:26).

This is a lot of people. In fact, Paul meant the whole of humanity when he spoke about “all of Israel.” That’s a tricky theological point, but it’s important. Paul, remember, was the author of the letter to the Galatians – possibly the earliest Christian text -- where he noted that in Christ there is “neither Jew nor Gentile” (Galatians 3:28).  A fine Pauline scholar at Duke, Douglas A. Campbell, has commented on this verse with his usual force and clarity in “Paul: An Apostle’s Journey” (2018), suggesting that Paul genuinely means that “all of humanity will be saved.” God, Campbell says, is “committed to us all permanently and irrevocably.”

This idea flies in the face of the usual fundamentalist or evangelical view that God sent Jesus to die on the cross as a kind of substitute for poor and miserable humanity, who without this deed would certainly perish. This unhappy notion turns God into a kind of bizarre and vengeful father figure who didn’t know what he was doing when he created mankind in the first place. Frankly it’s ridiculous that God would require this blood sacrifice to “satisfy” himself – and that we poor creatures just have to say “I believe” and we’re “saved” from eternal flames. In fact Jesus never taught this, the New Testament doesn’t suggest it and certainly Paul the Apostle would have been appalled by this crude extension of his theology, although there are fragments in his letters that, pulled out of context, make it seem as if Paul were promoting some version of what is now called substitutionary theology.

In reality, it wasn’t until the turn of the 11th century – a thousand years after Jesus died – that the theology of substitution found its first full articulation in St. Anselm’s treatise “Cur Deus Homo?” (That is, why did God become man?) Anselm was working on a medieval model here, where fealty to the Lord of the Manor was all. The honor of the master was what mattered, and his honor had to be “satisfied” at any cost. Applying this to human beings, Anselm theorized that we sinful creatures must be roundly punished for our failures. The price for our iniquity must be “paid” in the sacrifice of Jesus, a kind of divine transaction.

I suspect that Anselm’s theory (wonderfully contradicted by Abelard in the 12th century, when he wrote about the death of Jesus on the cross as simply a guide for all of us, a way of acknowledging that all human beings -- including Jesus -- had to go through suffering to accomplish union with God) has done a great deal of harm, especially as it evolved down the centuries into the theory that Jesus died for our sins so that God could feel “satisfied,” as if the Almighty couldn’t love his creation without this necessary and horrific atonement.

It’s not surprising to me that so many in the modern world have found this mean-spirited and transactional idea of Christianity an abomination, turning away from religion in wholesale fashion. I myself, as a child raised in a fundamentalist Baptist household, considered the idea of blood sacrifice too ridiculous to swallow. It wasn’t until adulthood, when I began to read Paul more seriously, that I came to view this differently by working carefully through the letters of Paul and the gospels as well. In college and graduate school, I studied Greek and began to push deeply into the New Testament, going back to the original texts to discover their fullest meaning. This work, recently, has led to a series of 21 lectures that I recorded on Jesus, Paul, and the early Christians. And I have just published “The Damascus Road: A Novel of Saint Paul,” where I try to imagine what it was like for Paul and his fellow missionaries (especially Luke, his main traveling companion) on the ground, as they journeyed throughout the Roman empire, from town to village, from country to country, creating Christian theology on the fly.

My sense is that Paul would have found the substitutionary model degrading, a small version of what Easter means. More and more, I agree with Richard Rohr, the eloquent Franciscan monk and scholar, who writes: “God in Jesus moved people beyond the counting, weighing, and punishing model — which the ego prefers — to a world in which God’s mercy makes any economy of merit, sacrifice, reparation, or atonement both unhelpful and unnecessary.”

Atonement is always wonderful, but it won’t do to pass over the cross too quickly. Good Friday is there, a terrible murder at the heart of Christianity. In his letters to the Romans and the Galatians, Paul struggled with this violence, which he found repellent. And he says, repeatedly (as in Romans 3:24), there was an element of expiation in the death of Jesus: a route all of us must follow, the only route to wholeness and harmony with God. Jesus was a man who became the perfect example of godliness, to the point where he identified wholly with God. He experienced union with God, and therefore showed us how it’s done. And it can’t be done except through death and dismemberment, as death is the prerequisite for Resurrection. God forgives humanity, says Paul, “through faith” in this process.

The crucial word here is “faith” or pistis, which means an ability to rest thoroughly in God. Paul doesn’t say that if you “believe” in Jesus you will be “saved.” That’s theological baby-talk. It’s way more complicated than that, and way more interesting. Paul’s key theory is that of kenosis, which finds its fullest Pauline elaboration in Philippians 2:5-11, where he notes that Jesus himself “humbled himself” at the cross, becoming like us. He emptied himself out. The little selves that ran around in Jesus of Nazareth: Jesus as son or brother, Jesus as friend or Roman subject, these were uniformly erased when he took on the full “mind of Christ,” as Paul says in 1 Corinthians 2:16. Jesus become the anointed one, and therefore showed us a pathway to reconciliation or atonement with God. It’s in the imitation of Christ that we find soteria, that finely nuanced Greek word meaning “salvation” but also “wholeness” or “enlightenment” -- the latter being my preferred English translation, as it unites Christianity with the Eastern tradition that underlies behind it.

It’s so easy to misread Paul, especially as the translations of the Greek into English are so overdetermined. Faith meant many things to Paul, but he certainly understood it as resting in God, as trust in God’s universe, where a kind of cosmic spirit (as defined in the Greek word logos) undergirds and informs the world. He believed in belief itself, which is giving oneself in love to an idea. “Belief” is, in fact, a version of a Middle English word meaning “to hold dearly,” and Paul held dearly the transformations of the spirit that Jesus modeled. Paul himself was transformed on the Road to Damascus, as he tells us in Galatians (1:13-17) and Philippians (3:4-7). And the word in Greek is metanoia, and it’s worth looking into the root meanings here.

Meta in Greek means “going beyond,” as in “metaphysics.” “Noia” is “mind.” So one must go beyond the boundaries of consciousness. One opens up the little mind of the self to the wider mind of the Self. And the Self in the largest sense is the Christos, the cosmic Christ in each of us. When we go beyond our petty and often all-consuming selves, when we open to the spirit, to the Cosmic Christ, to whatever we mean when we utter the name of God, we experience resurrection.

All Christian thinking is Resurrection thinking, and on Easter our minds, like Paul’s, turn to the Mind of Christ, where each of us might one day dwell with “all of Israel.” It’s a beneficent and radical vision of equality and peace, and it’s the goal toward which I myself strive as best I can.

Jay Parini, a poet and novelist, teaches at Middlebury College. His most recent book is New and Collected Poems, 1975-2015."