Robert Mueller has unveiled the failings of a vastly corrupt system. It's almost too late to save our democracy 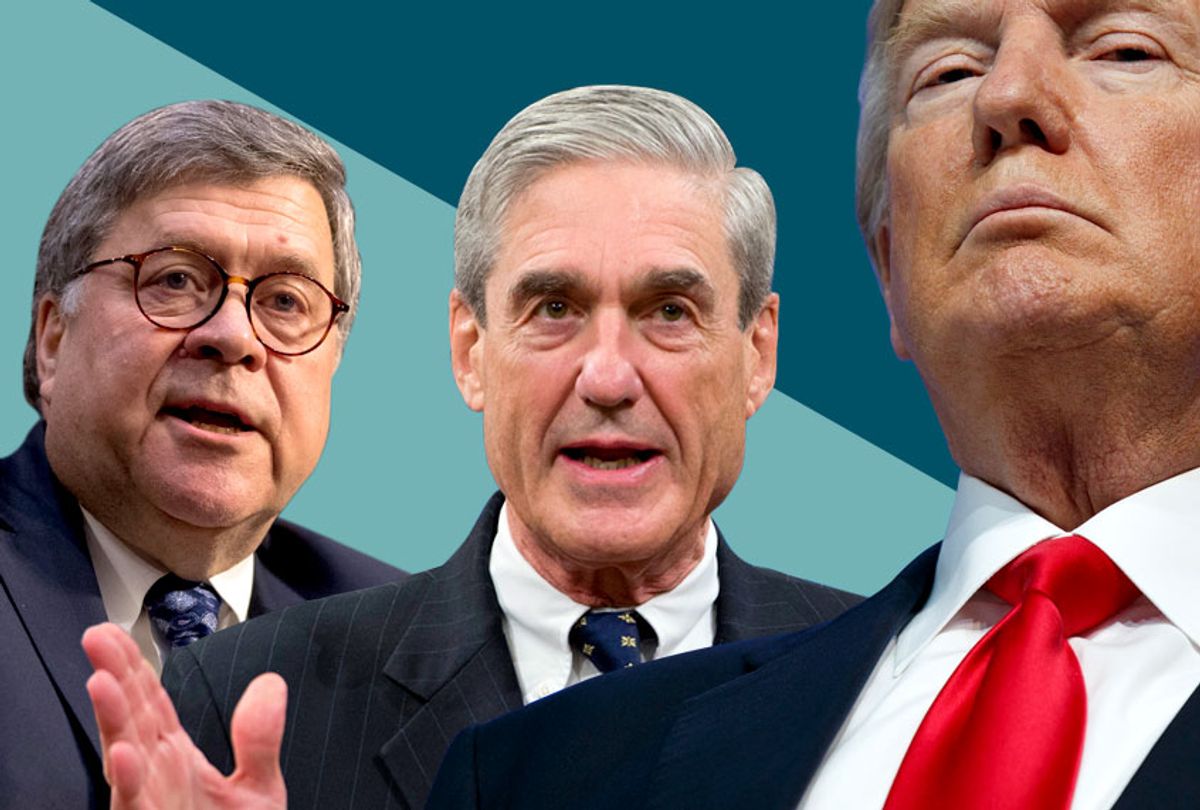 It must a comforting thing to be rich, white, male and a member of the Republican Party because it means that you are insulated from responsibility for your own bad behavior while still being able to pander to the rest of the world with blatant falsehoods about "personal responsibility."

Last week, Robert Mueller's much-anticipated report on the Trump-Russia scandal was finally shared with the American people and the world. Even in redacted form, it was a script that shows the enduring power of the special privileges afforded to rich white men of a certain political orientation.

During his Thursday press conference and/or PR stunt for Donald Trump, Attorney General William Barr defended the president's flagrant disregard for the law by explaining that he had been upset and his feelings were hurt:

In assessing the president’s actions discussed in the report, it is important to bear in mind the context. President Trump faced an unprecedented situation. As he entered into office, and sought to perform his responsibilities as president, federal agents and prosecutors were scrutinizing his conduct before and after taking office, and the conduct of some of his associates. At the same time, there was relentless speculation in the news media about the president’s personal culpability. Yet, as he said from the beginning, there was in fact no collusion. And as the special counsel’s report acknowledges, there is substantial evidence to show that the president was frustrated and angered by a sincere belief that the investigation was undermining his presidency, propelled by his political opponents, and fueled by illegal leaks.

The American people also learned from the report that Mueller declined to prosecute Donald Trump Jr. because, in plain English, he was too dumb to know that he was likely committing crimes.

Of course, poor and working-class people are not allowed such latitude, or given the benefit of the doubt regarding how their emotions or intelligence may have impacted their decision-making and other behavior. This is true more generally for nonwhites, Muslims, immigrants and all those viewed as the un-American "other."

For example, poor black women who send their children to schools in better districts are fined tens of thousands of dollars and put in prison for years because they committed "theft" and "fraud." Black and brown boys and men harassed under stop-and-frisk laws are later charged with obstruction of justice or resisting arrest if they dared to protest being bullied by thuggish police officers. Many thousands of people are in prisons and jails because they cannot afford bail. Poverty is criminalized in America. Prosecutors disproportionately pursue harsher punishments for black and brown defendants than they do white people. Poor and working-class people of all colors are treated unfairly by America's legal system: they cannot hide behind the shield of "affluenza" because such distinctions are only allowed for America's royalty -- those who are rich and white.

In America there is one set of laws, rules and expectations for the rich, white, male and powerful, and another one for everyone else. A person does not need to be a great jurist or philosopher to comprehend that self-evident truth.

The Mueller report is a story about an out-of-control and lawless president who ordered his minions to break the law by obstructing justice and committing other likely illegal acts. Trump's malfeasance in that regard was so great that Mueller's team felt that interviewing the president would yield no great return because so much of his bad and likely illegal behavior was done in plain sight. Mueller's report also details corruption and other untoward and damning behavior by a president and his coterie, a group that collectively possesses contempt for American democracy and the rule of law. This cabal redefines public service as selfishness and greed in the service of their own personal interests.

As to specifics, Trump and his inner circle may not have committed the narrowly defined crime of "criminal conspiracy." But for all intents and purposes they colluded with a hostile foreign power to undermine the integrity of the 2016 presidential election.

Analysts at Lawfare have explained how Donald Trump's minions “were aware the Russians sought to help them win. They welcomed that assistance. Instead of warning the American public, they instead devised a public relations and campaign strategy that sought to capitalize on Russia’s illicit assistance. In other words, the Russians and the Trump campaign shared a common goal, and each side worked to achieve that goal with basic knowledge of the other side’s intention. They just didn’t agree to work toward that goal together.”

This most generous reading is itself largely a reflection of how Trump's agents, per the Mueller report, were not cooperative with investigators. This made criminal conspiracy much more difficult to prove because evidence may have been destroyed or otherwise made unavailable.

On Twitter, political consultant David Rothkopf summarized the ultimate meaning of the Mueller report this way:

Having read the redacted Mueller Report the one inescapable conclusion that any reasonable, objective reader must reach is that Donald Trump is unfit to be president of the United States. He willingly betrayed his country and sought to undermine the rule of law. He must go.

Tom Nichols, a national security expert and author of the bestselling book "The Death of Expertise," reached a similar conclusion by focusing on Trump's betrayal of his sworn constitutional duty:

But we cannot look away from what is now, in the light of day, the undeniable reality that Donald Trump has no intention of defending this country from the Russians. At every turn, Trump has sided with Russian President Vladimir Putin against his own intelligence and law enforcement professionals. He has accepted Putin’s lies and denials, despite the fact — as we know now — that Russian interference was a fact and that Trump not only knew of it, but presided over a bunch of half-witted, morally compromised, and unpatriotic minions who were trying to figure out how to make hay out of the Russian offers of help rather than doing their duty and calling the FBI.

Russia attacked our democracy. Trump and his cronies knew it and were glad for it. As president, Trump has steadfastly refused to accept his responsibility to do anything about this assault on our institutions. This is a dereliction of duty, and it continues even now.

Donald Trump is the president and the commander in chief until the Congress or the voters say he is not. But nothing will ever change the fact that Robert Mueller has dragged into the light one of the greatest and darkest stains on a presidency in American history.

In a perverse backlash, despite or perhaps even because of these damning findings, Trump's voters will continue to support him.

Trump's supporters are angry that the system seems rigged against "people like them." This is why Trump's voters installed him in office. But they don't really want to fix the system. Instead, Trump's voters want it to be rigged in their favor to the disadvantage of other people -- especially black people, Latinos and Muslims.

Moreover, Trump's supporters actually wish they were like him, a rich and powerful white man who can commit all manner of apparent crimes and wallow in immorality as he throws down lightning bolts of cruelty and evil from the top of his mountain onto the heads of his enemies. Since Trump's voters and other supporters are morally compromised and broken -- which is why they supported him in the first place -- they will see the Mueller report as more than an exoneration. To them it is a celebration of Trump's bad behavior. For that reason and others, they will support him even more enthusiastically now that the Mueller report is (mostly) a matter of public record.

But the rage at the system that helped to lift Trump into the White House is also based on some very reasonable concerns about a country where elites have largely failed the people. There is a crisis in democratic norms, and our social institutions are failing us.

The behavior of Donald Trump is that of a pathological, kleptocratic class of American and global elites. In exposing that fact even more than was already clear, the Mueller report also lays open other deeply-held myths about American society and its leadership class.

Meritocracy is a joke in America. (The concept is actually based on a 1958 satirical science fiction novel by a British sociologist.) Racial, income, and wealth inequality have severely choked off intergenerational upward mobility during the last few decades. Inherited money and skin color are greater predictors of life success than "hard work," "intelligence," "personal responsibility" and "discipline". Donald Trump and the others in his inner circle are human mediocrities at best who have both great affluence and great influence in American society.

American Exceptionalism is also in most ways a myth. The United States has problems that are common to other countries around the world, including as a corrupt leadership class, a large swath of the public that holds authoritarian views, extreme wealth and income inequality, ethnic violence, and numerous failing social and political institutions. If Trumpism were a country it would be a banana republic.

As evaluated by the Economist  Intelligence Unit the United States is a "flawed democracy" that is ranked 25th in the world. A free press is also one of the foundations of a healthy democracy. The United States is failing in that regard as well: Reporters with Borders now ranks it 48th on the World Press Freedom Index.

In total, the Mueller report, even in Barr's redacted form, is a political document that makes a clear case that Donald Trump should be impeached, convicted and removed from the presidency. The Mueller report is also a picture of America's political culture in critical condition. America is supposed to be a shining city on the hill and a beacon of democracy for the world. At present it is more like a decrepit haunted house.

The Democratic Party and other people of conscience have a choice to make. Do they engage in kinetic political action, using the powers granted to them by the Constitution? Or do they choose to be passive and defensive, shackled by worries about "political expediency" instead of saving the country's democracy? The Democratic Party and the so-called Resistance must act boldly and swiftly. Weakness or indecision are a gift to Donald Trump and the authoritarian-fascist movement he leads.

Do the Democrats have the courage and fire to do the tough and necessary work of saving America? All evidence to this point suggests the answer is no.