Billed as a "healthy" drink, the fermented tea could be worse than soda for your oral health 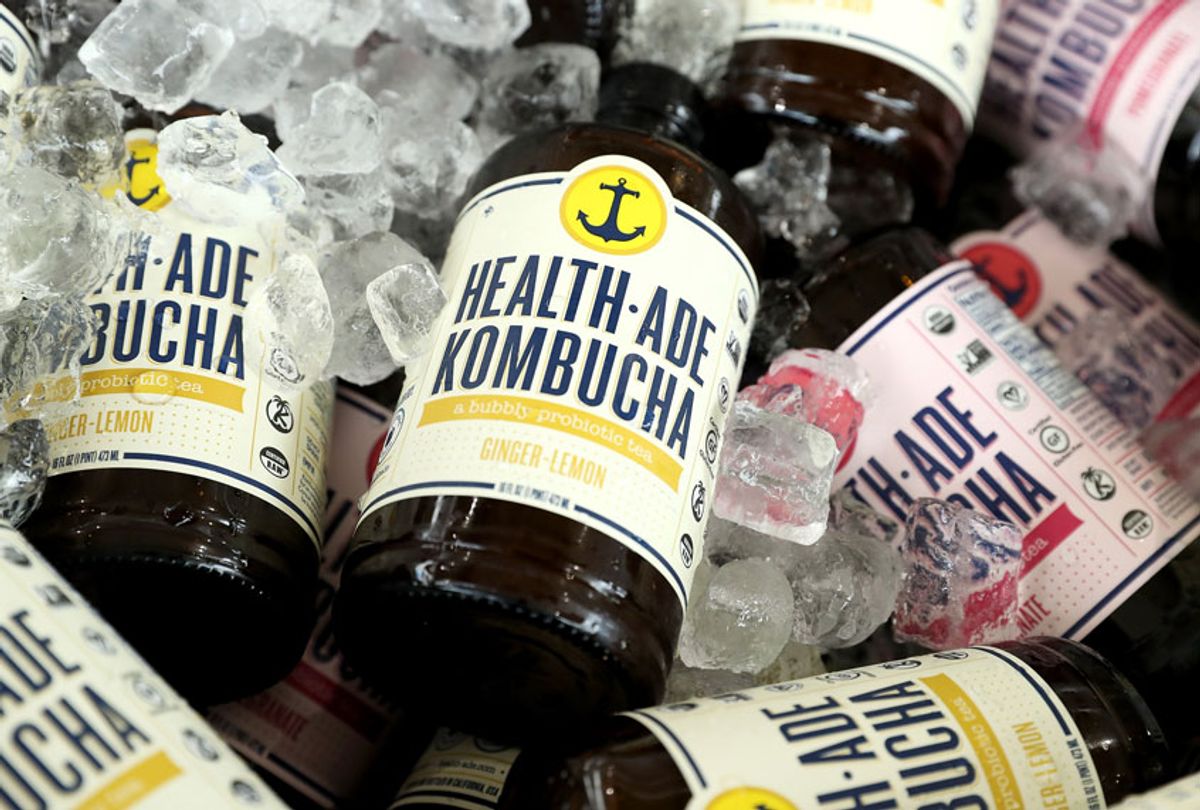 (Cindy Ord/Getty Images for Tone It Up)
--

For many new age-y health enthusiasts, probiotic drinks like kombucha are an intrinsic part of a healthy lifestyle.

Kombucha, which is a fermented sweetened tea made of a symbiotic colony of bacteria and yeast (SCOBY) that grow inside a semi-permeable membrane, is said to aid digestion, boost immunity, reduce inflammation, increase energy, and even alleviate anxiety and depression, among other (oft-dubious) claims. Since its rise in popularity over the last ten years, kombucha can be found on the shelves of nearly every grocery store, especially health food stores like Whole Foods. The kombucha market around the world is expected to reach $5.45 billion by 2025.

However, the rise in this drink among the health conscious has come with a price: your teeth. Some dentists are noticing a rise in eroded enamel coinciding with kombucha’s popularity, questioning its so-called miraculous impact.

“Kombucha is nearly as acidic as a pop and energy drinks,” Dr. Bobby J. Grossi, an author, motivational speaker and founder of the Grossi Institute for Dental Assisting, told Salon. “Acidic drinks mess with the PH level of the saliva which ideally should be 7 or 7.3, when the saliva level becomes more acidic it becomes a breeding ground for bacteria which can take over the mouth.”

This bacteria, Grossi said, causes erosion of the enamel, plaque accumulation which can lead to both gum disease or tooth decay. Grossi added sugary drinks weaken your teeth.

The acid in kombucha is crucial for the bacteria’s survival, which makes this a challenging issue for manufacturers to solve. Dr. Greg Grobmyer of AuthorityDental.org, who has a DDS from the University of Tennessee Health Science Center, told Salon it is nearly as acidic as soda, too. “It is not uncommon to see ‘pitting’ in the enamel of someone who drinks a lot of kombucha," he told Salon.

Pitting occurs on the surface of a tooth and usually leads to decay.

“We suggest rinsing your mouth with water after drinking kombucha to wash away the acidic compounds it may leave behind and not eating or brushing for at least 30 minutes afterwards, allowing your tooth enamel to remineralize and reharden,” Grobmyer said.

When asked if it is better or worse, Grossi said he does not believe it’s either-or between kombucha and soda.

“Both drinks are very acidic and have a lot of sugar in them,” Grossi said. “I am a firm believer that water and milk are the drinks of choice.”

“I also recommend always drinking water with a fresh lemon in it to help create a more alkaline environment, not only in your mouth but in your bloodstream,” Grossi said.

Overall, it seems the jury is still out when it comes to kombucha's purported health benefits.

While studies do show that probiotic foods are good for your digestion and gut health, other studies have called into question kombucha's healthfulness. A 2014 academic journal article, published in Comprehensive Reviews in Food Science and Food Safety, states: “Most of [kombucha's] benefits were studied in experimental models only, and there is a lack of scientific evidence based on human models.”

Given that dentists constitute the front lines of our oral health, it might be wise to heed their observations.