During a series of recent congressional hearings, DeVos had to respond to recent report findings 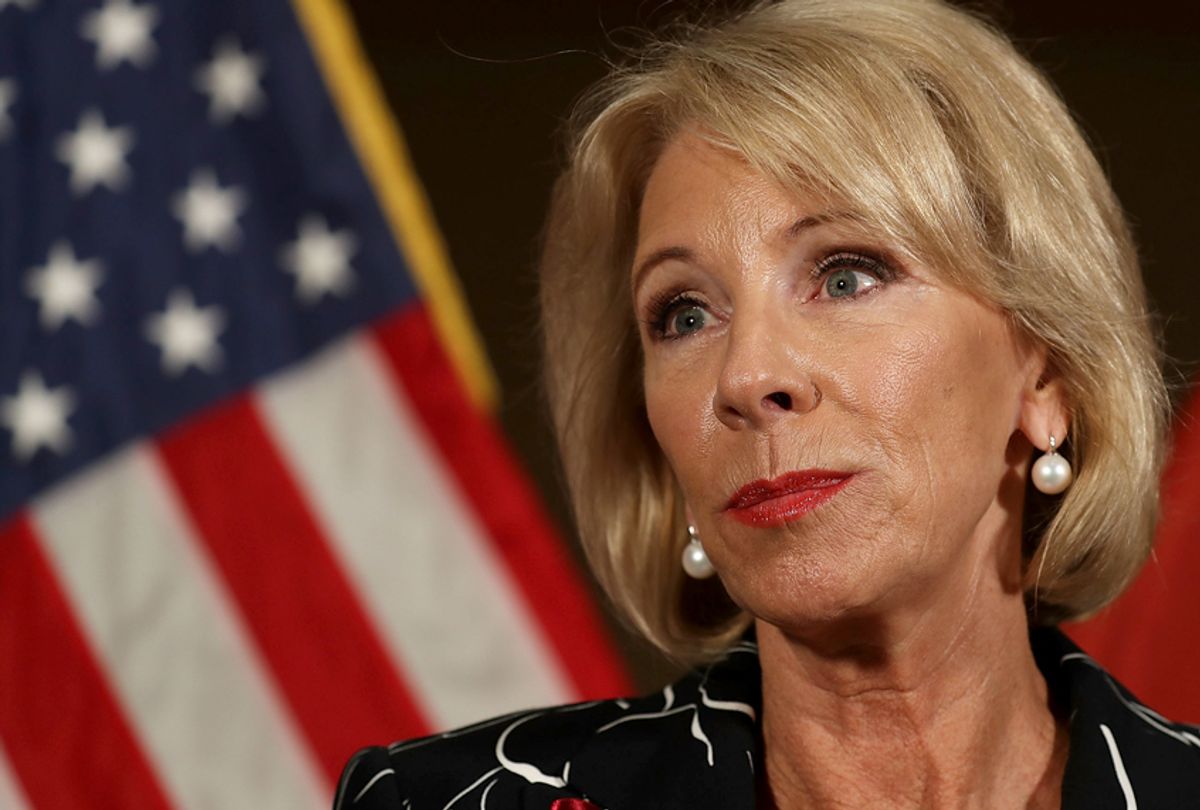 During a series of recent congressional hearings in Washington, D.C., U.S. Secretary of Education Betsy DeVos had to respond to a recent report finding the U.S. Department of Education has been scammed for hundreds of millions of dollars by fraudulent or mismanaged charter schools. Her responses reveal not only her inability to counter legitimate concerns over the spread of charter schools but also the charter school industry’s resistance to honestly address a chronic problem with its schools.

The report, which I co-authored with Network for Public Education Executive Director Carol Burris, found that up to $1 billion awarded by the federal government’s Charter Schools Program (CSP) went to charter schools that never opened or opened for only brief periods before being shut down for mismanagement, poor performance, lack of enrollment, and fraud. Our calculation was that a least a third of the $4.1 billion spent by the CSP was wasted.

Members of Congress repeatedly referred to these findings when questioning the secretary’s management of charter school grants and her proposal to increase funding for the program to $500 million annually. In response, DeVos first attempted to deny the problem, saying, “You are always going to have schools that don’t make it.”

When Democratic representatives continued their questions, DeVos then tried to distract attention from the problem, arguing there was a need for “more” charters, “not less.”

In the most recent exchange, DeVos pivoted to attacking the report authors personally rather than disproving their findings, saying, “The study was really funded by and promoted by those who have a political agenda against charter schools.”

That final exchange in particular raised the hackles of my coauthor Burris, who quickly delved deeper into the data to find that incidents of financial fraud, waste, and mismanagement in the charter school grant program are likely worse than our first estimate.

DeVos’ lame defense of the federal government’s charter school grant program before Congress should draw more scrutiny of the program rather than alleviate concerns.

By denying, distracting, and personally attacking the report authors, she encouraged us to delve further into the evidence that much of the money awarded by the program went to charter schools that are, at best, bungling attempts to start up education businesses that should never have been financed to begin with or, at worst, scam operations that willfully intended to make off with taxpayer money and not suffer any negative consequences.

In an “open letter”to the secretary on Valerie Strauss’ Answer Sheet blog site for the Washington Post, Burris and Diane Ravitch — an education historian, bestselling author, and cofounder of the Network for Public Education — write:

We were deeply disappointed by your public dismissal of the Network for Public Education’s report . . . As Secretary of Education you too should be concerned about the blatant waste of taxpayer dollars and the misrepresentations applicants make in order to secure those funds. Most of what we document in the report predates your time in office, so you should not be dismissive or defensive about what occurred on your predecessors’ watch. However, if you do not address the root causes, the problems will continue.”

Burris and Ravitch contend the report is “based on fact, not opinion,” and to demonstrate its veracity, they present compelling new evidence that the original estimate of one-third of the $4.1 billion in grant money being wasted on defunct charter schools is likely a low-ball assessment.

For instance, they point to grant money awarded between 2006 and 2014 to start up or expand charter schools in Michigan, DeVos’ home state. Of the more than 250 schools receiving grant money, at least 109, 42 percent, either never opened or closed. The amount of money wasted on these defunct charters totals $20,272,078. Despite this enormous waste, Burris and Ravitch note with alarm, DeVos’ department in 2018 gave Michigan yet another grant of $47,222,222 to start up or expand even more charters.

“As anxious as you are to open new charter schools,” they modestly propose, “if nearly half of them do not make it, we suggest that something is wrong with the selection process.”

The charter school failure rates Burris and Ravitch find in Michigan are similar to rates in other states that received very large grants.

In Ohio, of the roughly 290 charter schools that received federal grants from the CSP during the same time period, 117 schools, 40 percent, also never opened or are now closed. The amount of waste to taxpayers totals $35,926,693.

In Louisiana, 51 of the 110 charter schools, 46 percent, that received funding through the CSP failed.

In California, of the more than 780 charter schools that received grant funds, 297 schools, 38 percent, closed or never opened, resulting in $103,467,332 in wasted education funds.

Keep in mind, this is an accounting from 2006 to 2014. Hundreds of millions more have been disbursed to charters by the grant program since then, including under DeVos’ watch. And now she wants to increase the program’s budget to half-a-billion dollars annually.

It’s not just the money

Local school districts also take a hit because of the loss of funds to students who transferred to the schools and the unrecovered costs the charter accumulated while it was in operation, frequently amounting to many thousands of dollars. In other words, the whole community takes a financial hit, which can result in the district having to make across-the-board budget cuts that eliminate teacher positions and programs in public schools all children attend.

But the pain inflicted from charter school fraud and malfeasance goes beyond money.

With every new charter school that said it would open and didn’t, or opened and then quickly closed, there were families and kids who fell for the marketing pitch and ran after promises of new and better education opportunities that turned out to be a mirage.

In a California community, one of the schools that received a $600,000 grant, Iftin University Prep High School in San Diego, closed mid-year, abandoning the remaining students and disbanding the senior class who then had to find other schools to complete their high school diplomas.

Another California charter school that received a $575,000 federal grant, City High School in Los Angeles City, closed abruptly in the middle of the school year, leaving 116 students scrambling to find new schools. The school never had a permanent facility, which led to students to drop out when the program that had been promised to them never materialized.

In, Florida, where an average of 20 charter schools close per year, similar tragic stories have played out.

Acclaim Academy, a charter school in Orange County, which received a federal grant of $175,000, closed with only three weeks left in the school year, with less than a day’s notice given to parents and teachers. “The big question is what is going to happen to the students,” a local reporter wondered.

A Florida chain of charter schools operated by Richard Milburn Academy Inc. received at least two grants totaling $375,000 for schools that never opened. The chain is notorious for operating charter schools rife with fraud and mismanagement, including two schools that closed after administrators manipulated grades, two shut down for low academic performance, and one that was closed after half the graduating class received diplomas despite lacking sufficient credits.

In Michigan, a Detroit charter school, University Yes Academy, that received an $830,000 CSP grant promised high school students academic courses and school programs it never delivered. The school had five principals in three years. An audit of the school could not account for $300,000 of Title I funds. After the money went missing, the school switched to a different management firm run by the same person. Then the school’s contract was transferred to a third management firm, which closed the school a week before classes were to start, leaving students and families stranded and high school seniors uncertain of how they would graduate and get diplomas.

An Ohio charter school that received a grant of $414,530, Mahoning Valley Opportunity Center, suddenly closed in the middle of the year without explanation. Teachers who showed up for work and found the doors locked had to comfort a student sobbing in front of the closed school.

These stories are not only tragic for the teachers, families, and children directly affected, but also for the communities that hoped these schools would bring new jobs, education opportunities, and the prospect of a better future for all their citizens, but instead turned out to be empty promises. No amount of money can account for that crime.