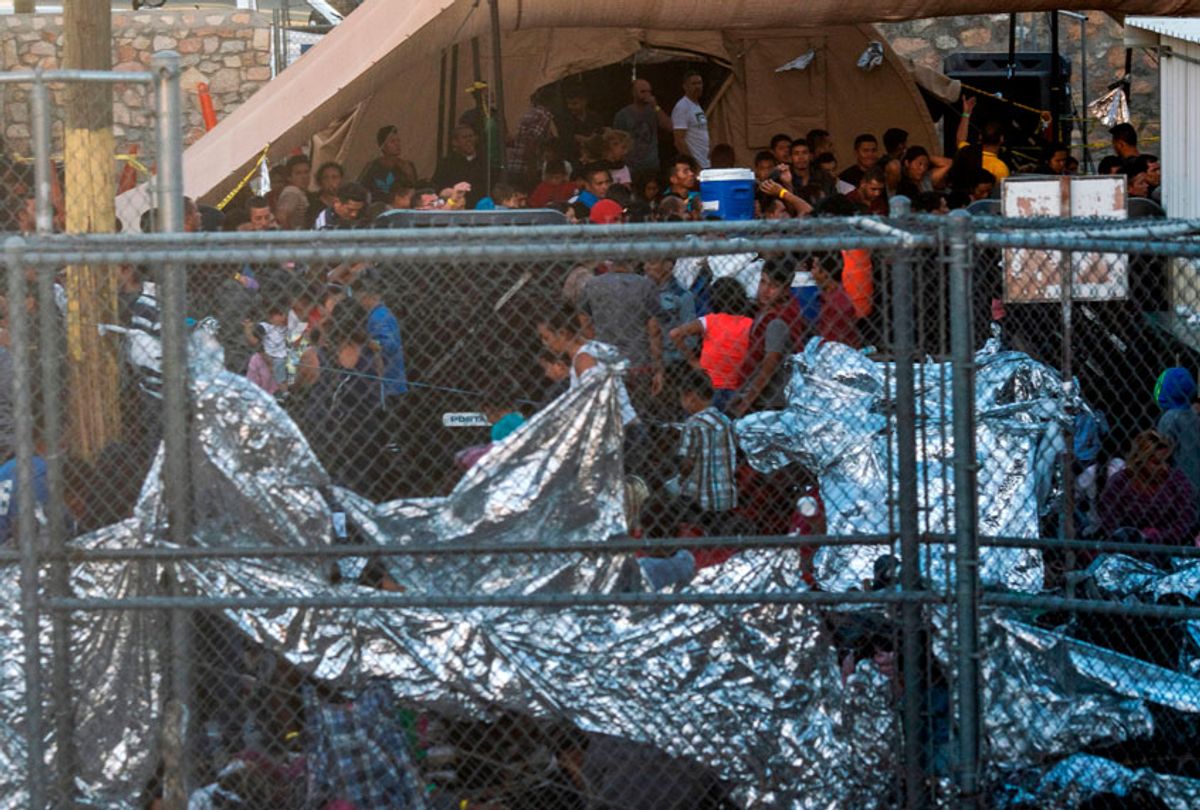 Migrants detained by US Customs and Border Protection are pictured in a makeshift holding facility beneath 'Paso Del Norte' bridge, between downtown El Paso and Ciudad Juarez, Mexico, as seen from El Paso, Texas, on April 19, 2019. (Getty/Paul Ratje)
--

The Defense Department awarded a California-based construction company a $23 million contract in February to build a "contingency mass migration complex" at Guantánamo Bay, Cuba, the New York Times reported on Monday. During the height of his showdown over the U.S.-Mexico border, President Donald Trump's administration considered housing migrant children at Guantánamo Bay to help manage an unprecedented surge in the number of migrants and asylum seekers. The idea was first proposed earlier this year as the Department of Homeland Security looked for military facilities where migrants and asylum seekers could be held as they wait for their cases to play out in the courts.

The Department of Defense has confirmed that military bases are being looked at as potential sites for housing migrants but the proposal to send migrant children kept to the notorious American prison and naval base in Cuba has not gained much traction "perhaps because of the optics of housing young people adjacent to terrorism suspects," an official who had seen the proposal told the Times. There are no "immediate" plans to house migrant children at the infamous prison, which had only been brought up as a potential housing situation because it has a dormitory facility that has been used in the past to hold asylum, the Times reported.

Still, the newspaper noted, the Defense Department awarded a California-based construction company a $23 million contract in February to build a "contingency mass migration complex" at Guantánamo. The plan, which was outlined in a February 22 contract announced by the DOD, will include "site shaping for tents, concrete pads for camp headquarters, galleys and dumpsters, perimeter and service roads, and a mass notification system. Supporting facilities include utility systems (electrical, water, and sanitary sewer), exterior lighting, information systems to include fiber optic cable service, utility infrastructure expansion, vehicle parking area, storm drainage, and removal of two family housing trailer units." The project appears intended primarily to accommodate an influx of migrants that might follow a deepening crisis in the Caribbean, though it may also be used to shelter Central Americans. It is expected to be completed by December 2019.

The DoD confirmed to the Times that military bases are being scouted as potential sites for housing migrants.

The major spike in the number of migrants attempting to enter the country has grown significantly under Trump and has overwhelmed short-term holding facilities in cities near the U.S.-Mexico border, leaving officials scrambling to find longer-term locations for detaining the migrants coming into the United States.

Government shelters holding migrants are at capacity, and issues at those facilities have been exacerbated both because of a spike in illegal border crossings and the Trump administration's aggressive efforts to arrest and detain undocumented immigrants throughout the country — including its decision to resist a policy the president derides as "catch and release," the practice by which undocumented immigrants are released from detention into the general population while waiting for their cases to proceed in the courts. More than 50,000 migrants are currently held in Immigration and Customs Enforcement — the highest number in its history.

The lack of facility space for processing migrants at the southern border is spreading to detention facilities across the country. The detention crunch was put at risk last week to become worse after Attorney General William Barr announced the administration would soon begin jailing asylum seekers indefinitely, a directive that, if implemented, could put thousands more migrants in custody each month.