The White House has been silent on militia activity 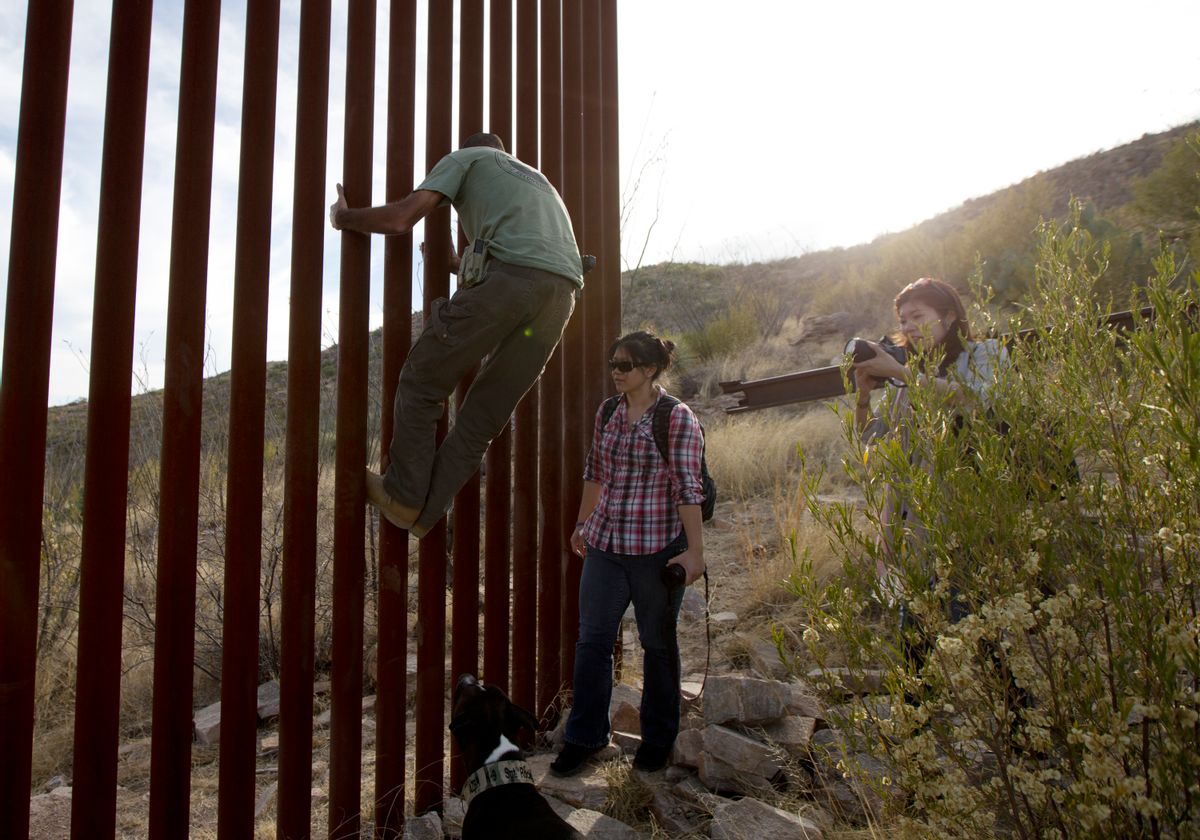 FILE - In this May 11, 2016, file photo, Tim Foley shows how to climb a section of the border wall separating Mexico and the United States near where it ends as journalists Chitose Nakagawa, right, and Marcie Mieko Kagawa look on in Sasabe, Ariz. Foley, a former construction foreman, founded Arizona Border Recon, a group of armed volunteers who dedicate themselves to border surveillance. With bids due Tuesday, April 4, 2017, on the first border wall design contracts, companies are preparing for the worst if they get the potentially lucrative but controversial job. (AP Photo/Gregory Bull, File) (AP)
--

In retrospect, it probably was inevitable that the constant fear-mongering by Trump and the White House about fleeing migrants described as invaders would encourage vigilante action. He is not to blame for the vigilantes, but he has done nothing but encourage the ill will behind the effort.

Over the weekend, the FBI stepped in, arresting a leader of a right-wing militia that was detaining migrant families at gunpoint near the border in southern New Mexico. Larry Mitchell Hopkins, 69, also known as singer Johnny Horton, faces charges of firearms possession by a felon.

The arrest came a few days after the United Constitutional Patriots (UCP) militia posted a video of members “detaining” hundreds of immigrants, many of them children.

“This is a dangerous felon who should not have weapons around children and families,” New Mexico Atty. Gen. Hector Balderas said following the arrest. The FBI action “indicates clearly that the rule of law should be in the hands of trained law enforcement officials, not armed vigilantes.”

The FBI and local police made the arrests in Sunland Park, headquarters for the militia, two days after the ACLU alerted officials that an “armed fascist militia organization” was working to “kidnap and detain” asylum-seekers at gunpoint in the state. The group had posted a video Tuesday showing hundreds of detained immigrants, many of them children.

According to the Southern Poverty Law Center, Hopkins has identified himself as the “national commander” of the UCP. According to court records, Hopkins has been convicted of felony firearm possession and impersonating an officer, The Daily Beast has reported. Hopkins, a sometimes performer, also goes by the name of the late singer Johnny Horton Jr.  The Huffington Post said that “Johnny” often runs the militia’s radio program, appealing last month for more “boots on the ground” to “capture” immigrants. He pleaded for donations for the group.

“The Trump administration’s vile racism has emboldened white nationalists and fascists to flagrantly violate the law,” the ACLU said in the letter. Gov. Michelle Lujan Grisham called on the militia to stand down. “Regular citizens have no authority to arrest or detain anyone,” Grisham said.

The White House, which is quite vocal about coyotes and vigilantes on the other side of the border, has been silent on militia activity.

According to The New York Times, while the firearms charge against Hopkins is relatively minor, it is likely the start of a deeper investigation into his activities and those of the militia, and opens the way for the authorities to bring more serious charges like kidnapping and impersonating a police officer or an employee of the United States.

The arrest comes as tensions rise over ultraconservative paramilitary groups operating along the southwestern border. Professed militias have a long history of targeting immigrants from Latin America, tracing back to the Ku Klux Klan’s creation of its own border patrol in the 1970s. Record numbers of Central American migrants apprehended by federal authorities in recent months have been accompanied by a new surge in militia activity on the border.

The militia and its members have posted a number of videos on Facebook showing detained immigrants. Members are seen in fatigues and carrying what appear to be semiautomatic rifles and handguns; some wear black masks to hide their identities.

A spokesman for the group, who identifies himself as Jim Benvie, insisted to The New York Times that the militia’s actions are legal, and has said in a Facebook video that Border Patrol agents are “happy” for members’ help.

U.S. Customs and Border Protection said in a statement that CBP “does not endorse private groups or organizations taking enforcement matters into their own hands.” It added that interference by civilians “could have public safety and legal consequences for all parties involved.”

Despite the recent criticism over its operations in New Mexico, the militia maintains Facebook and YouTube postings. Speaking to someone using a voice distorter while wearing a gas mask, Hopkins appeared on a right-wing YouTube channel in November, claiming to  be in touch with President Trump after a chance meeting at a Las Vegas casino.

Professed militias have long operated along the border with attempts to curb the flow of undocumented migrants into the United States. But targeting the recent influx of families, who are legally allowed to request asylum and often quickly surrender to Border Patrol agents, is raising tension with human rights activists in this part of the West.

Jim Benvie, 43, a spokesman for the United Constitutional Patriots, said in a telephone interview that his group had been camped near El Paso for the past two months. Benvie contended that his group’s actions were legal, comparing the detention of the migrants to “a verbal citizen’s arrest.” Benvie added that the group has a new rule in which members are not allowed to go on patrol with military-style rifles, but can still carry handguns. “We can’t make them stay if they don’t want to,” he said.

“We’re just here to support the Border Patrol and show the public the reality of the border,” said Benvie, adding that the organization plans to remain on the border until the extended wall proposed by President Trump is built or Congress changes immigration laws to make it harder for migrants to request asylum.

Militias have recently stepped up their activities in New Mexico and other states as the authorities scramble to respond to a surge in families from Central America, with total apprehensions on the border reaching more than 92,000 in March.

Asylum laws allow immigrants to enter legally through approved portals to file the appropriate paperwork. Many are released while awaiting court action on their files.

Perhaps we should expect that a law-and-order-oriented White House would to be more vocal about lawful behavior.