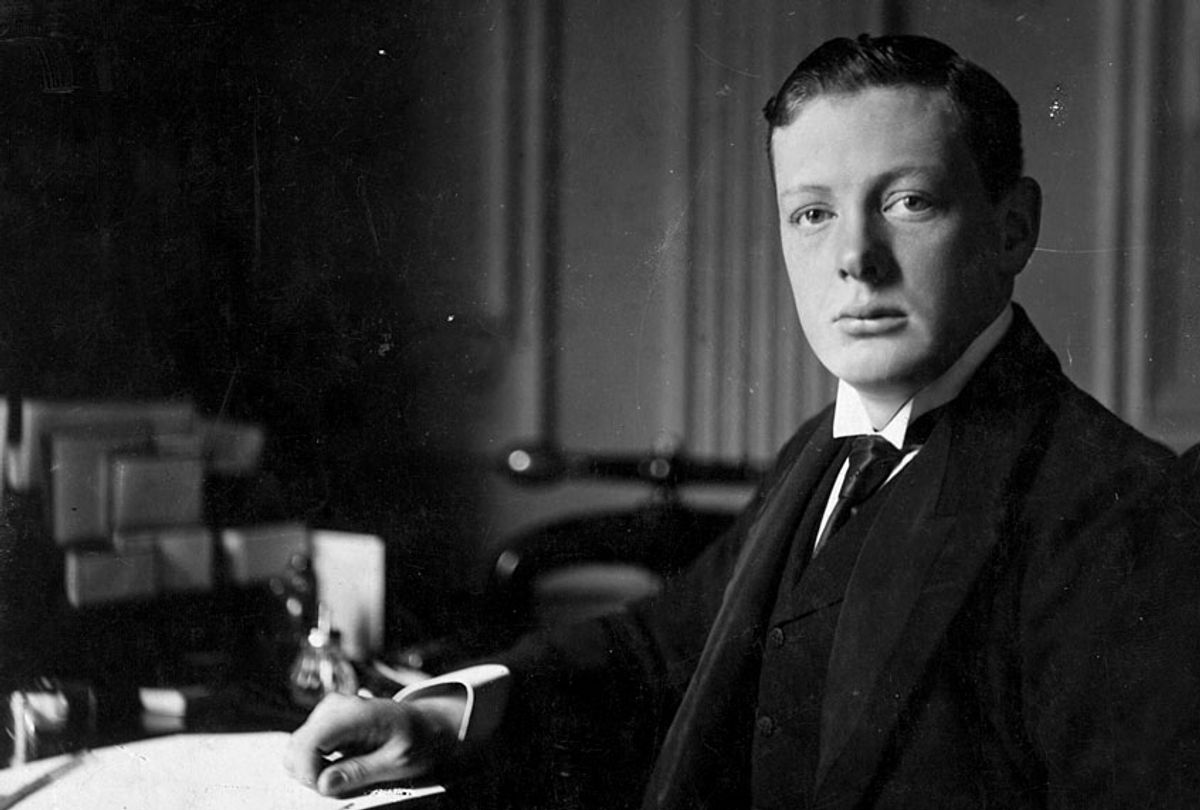 "Churchill: Wanted Dead or Alive" recounts the events that took a young Winston Churchill from the bivouacs and battle sites of Transvaal to his incarceration as a prisoner of war in Pretoria and ultimately to a bold escape across the border into Mozambique—as told by his granddaughter Celia Sandys.

“I have greatly enjoyed writing many books, but by far the most exciting experience was retracing my grandfather’s thrilling adventures in South Africa during the Anglo-Boer War. When the twenty-four-year-old Winston landed in Cape Town on October 30, 1894, he was the precocious son of a famous politician; when he sailed away nine months later, he was a household name on both sides of the Atlantic.”

Churchill did not celebrate his twenty-first birthday on 30 November 1895 with a ball at Blenheim Palace, his ancestral home. That would have been conventional, and he was not a conventional young man. It was not the popping of champagne corks but the crack of rifle-fire which heralded his coming of age. In Cuba, under fire for the first time, a bullet missed his head by less than a foot before fatally wounding the horse beside him. It was the first example of what would be Churchill's phenomenal luck in the face of enemy fire.

This short adventure in someone else's war brought Churchill his first medal—the Spanish Red Cross, which unfortunately he could not wear on his British uniform—and earned him a certain amount of notoriety in the British press. It also earned him twenty-five guineas, his first income as a journalist. His letters from Cuba, written while living rough, were a portent of his formidable journalistic talents.

In January 1896 Churchill returned from Cuba to rejoin his regiment, with whom it was intended he would leave later that year for an eight-year posting in India. While most young officers looked forward with keen anticipation to military life in India—polo, pigsticking and a host of servants—Churchill increasingly saw it as a political backwater he must avoid. Nine months remained before the regiment would set sail, and during this time he once more prevailed upon his mother to use her influence with those in power. He wished to be posted, as he put it, 'to scenes of adventure and excitement—to places where I could gain experience and derive advantage'. He would have liked to join General Sir Herbert Kitchener's expedition to reconquer the Sudan, but when that prospect dimmed he set his sights on Rhodesia, which, he explained in a letter to his mother on 4 August, would provide 'excitement and adventure'. Meanwhile, assiduously promoted by Lady Randolph, he used his time in England to cultivate many important people.

Having failed in his attempts to obtain a more exciting posting, Churchill sailed for India on 11 September 1896. Here, in the garrison of Bangalore, he was to endure two years of peacetime soldiering, alleviated only by polo, a great deal of reading—'the desire for learning came upon me'—and Miss Pamela Plowden.

Pamela, seven months older than he, was the first love of Churchill's life. She was the daughter of the Resident of Hyderabad, and they met during a polo tournament. He wrote the next day to his mother, 'She is the most beautiful girl I have ever known . . . We are going to try to do the city of Hyderabad together—on an elephant.' The love affair would continue for several years at a desultory pace dictated by the demands of Churchill's main aim: to win the fame and fortune he felt he needed to launch his political career. (She would marry the Earl of Lytton in 1902, would remain friends with Churchill, and would outlive him.)

It was during his time in Bangalore that, as far as we know, Churchill first confided his ultimate political aspirations, to Captain Bingham of the Royal Artillery. Bingham was Master of the Ootacamund Hounds, and was bringing the pack home through the dusty, undulating country when a young cavalry officer out riding fell in with him. They struck up a conversation, during which the young officer, puffing on a cigar, said he would be giving up the army for politics, and would one day be prime minister.

In the summer of 1897 Churchill came home on leave. On the lawns at Goodwood, while he was enjoying the racing and improving his finances, an opportunity arose for further adventure. The news arrived of a rebellion among the Pathan tribesmen in the mountains along the North-West Frontier of India. A British expedition, the Malakand Field Force, had been formed to quell the uprising, and the General appointed to command it was none other than Sir Bindon Blood, who the year before had promised Churchill a place on his staff should he ever command an expedition again.

As I looked through the archives, I was struck once again by the alacrity with which Churchill seized this outside chance. Abandoning his leave, he took the next boat to India, cabling General Blood to remind him of his promise. Blood was unable to find an immediate vacancy, but his reply was encouraging: 'I should advise your coming to me as a press correspondent . . . If you were here I think I could, and would if I could, do a little jobbery on your account. Yours in haste, B. Blood.'

The hint was more than enough for Churchill. Having persuaded his Colonel to grant him leave, he set off by rail for the two-and-a-half-thousand-mile journey from Bangalore to the scene of operations. He had been commissioned as a war correspondent by an Allahabad newspaper, the Pioneer, and had also arranged that the Daily Telegraph would pay him £5 a column for his letters from the front.

Within a month of arriving at General Blood's headquarters, Churchill had been attached to the force as a replacement for an officer who had been killed, had been involved in heavy fighting, and mentioned in dispatches. He had achieved all his aims. Was he lucky, or had he simply made the most of the situation? I think the latter. He continued to write for the Daily Telegraph, and thus got the best of both worlds—as an officer on active service and a war correspondent. Thinking he had struck an insufficiently hard bargain with the paper, he sought his mother's help in negotiating for better terms: 'When I think of the circumstances under wh. those letters were written . . . temperature of 115 degrees or after a long days action or by a light which it was dangerous lest it drew fire . . . I think they are cheap at the price.' (Greater financial reward would come with his book "The Story of the Malakand Field Force," which he wrote in five weeks and which, on its publication in March 1898, was widely recognised as a military classic.)

His letters home spared Lady Randolph none of the details which soldiers usually conceal from their loved ones:

I rode forward with the 35th Sikhs until firing got so hot that my grey pony was unsafe. I proceeded on foot. When the retirement began I remained till the last and here I was perhaps very near my end . . . I was close to both officers when they were hit almost simultaneously and fired my revolver at a man at 30 yards who tried to cut up poor Hughes's body . . . Later on I used a rifle which a wounded man had dropped and fired 40 rounds at close quarters. I cannot be certain but I think I hit four men. At any rate they fell . . .

In one letter to his mother, written on the eve of a battle, he expressed for the first time a sentiment he was to repeat at intervals over the next few years: 'I have faith in my star,' he wrote, 'that I am intended to do something in the world.' It was a faith that was reinforced when he emerged unscathed on the frequent occasions he recklessly exposed himself to enemy fire: 'I rode my grey pony all along the skirmish line where everyone else was lying down . . .' There is no doubt he actually enjoyed the danger. 'Bullets,' he wrote to Lady Randolph, 'are not worth considering. Besides I am so conceited I do not believe the Gods would create so potent a being as myself for so prosaic an ending.'

The Malakand Field Force’s successful campaign ended with punitive action against the rebellious tribes. There is little of Churchill’s usual animation in his laconic description of this final action, rather a hint of disapproval: 'We were to stay in the Mamund Valley and lay it waste . . . we lost for every village two or three British officers and fifteen or twenty native soldiers. Whether it was worth it, I cannot tell. At any rate, at the end of a fortnight the valley was a desert, and honour was satisfied.'