Yes, Trump, Mueller's report means the end of your presidency 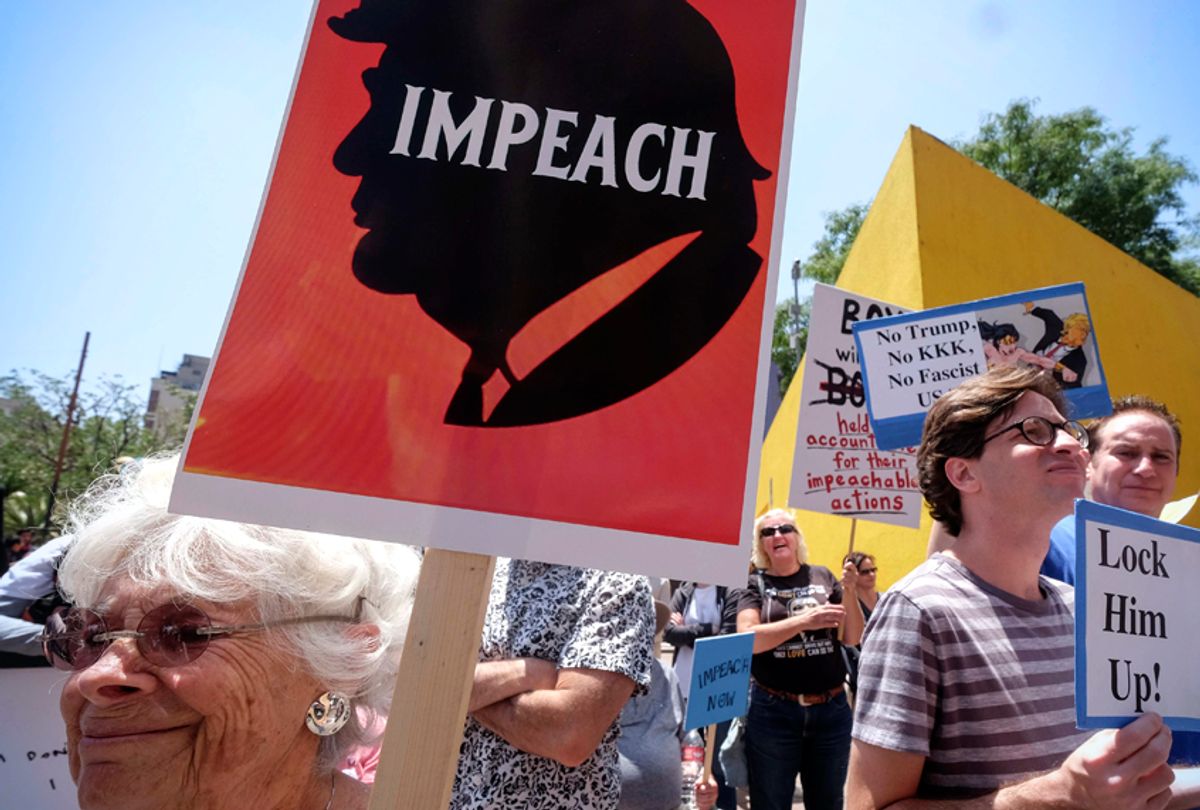 A large portion of the information and the evidence contained in the Mueller Report released last Thursday was not news — it was already part of the public record compiled by countless journalists and news organizations over the past three years. The fact that the special counsel’s team, with all of its subpoena power and vast array of investigative tools and resources, largely confirms prior press reporting on the subject is a testament to the extraordinarily high degree of effectiveness and professionalism of the media, despite a near constant barrage of charges of "fake news" by the White House.

Perhaps the most vivid tidbit of new information provided by the Mueller Report is an accounting of the events in the Oval Office on May 17, 2017, when Trump received word from Jeff Sessions that Deputy Attorney General Rod Rosenstein had just appointed Robert Mueller as special counsel. According to contemporaneous notes taken by Sessions’ top aide, Trump slumped into his chair, candidly confiding to the group surrounding him: “Oh my God. This is terrible. This is the end of my presidency.”

In one fleeting moment of clarity and honesty, Trump's salty epithet underscored his visceral understanding that the Mueller report would reveal how his team welcomed Russia’s massive attack on the foundations of American democracy. And then, instead of alerting U.S. law enforcement or intelligence agencies to these overtures by the Russians, Jared Kushner, Michael Flynn, and other Trump operatives did the following:

In order to gain some unfair political advantage in the 2016 presidential campaign, Trump and his team were willing without hesitation to betray the core interests of the United States in maintaining the integrity of our democratic and electoral systems and to provide aid and comfort to the efforts of a foreign hostile power to attack America and to shake its democratic foundations to its core.

This stark portrait of a presidential candidate and a campaign organization that was willing to seek a short-term political advantage at the risk of jeopardizing fundamental U.S. interests by soliciting and utilizing data that they knew had been hacked and stolen by the Russians amounts to a fundamental betrayal of the U.S. on a scale never before experienced by our country.

The Mueller report’s recitation of Trump’s repeated attempts to obstruct and derail the special counsel’s investigation was clearly intended to provide a detailed road map for impeachment proceedings by Congress. Attorney General Barr’s protestations to the contrary are belied by a simple reading of the text of the report, which makes it clear that Mueller would have asked a federal grand jury to return an indictment against Trump on several counts of obstruction of justice if had not felt constrained by the Justice Department's Office of Legal Counsel’s (OLC) opinion that a sitting president cannot be indicted (a conclusion that is nowhere set forth in the U.S. Constitution itself).

Mueller made it clear that if the evidence had shown that Trump had not obstructed justice, he would have said so, which he did not. Mueller then bit his tongue and refrained from concluding that Trump did, in fact, obstruct justice since he felt that it was unfair for him to explicitly say so when Trump would not have the right to try and rebut that conclusion in a court of law (since no indictment or charges would be made against him as long as he clung to the presidency).

Mueller has now passed the baton to Congress.

Members of Congress now have a Constitutional duty under Article I to investigate and commence impeachment proceedings against an unfit president who has clearly sided with a hostile foreign power against his own country and then used all of the tools of his office to obstruct an investigation of his highly questionable actions. Never before has this country had a president in the White House whose loyalty and patriotism to the country and its democratic ideals have been so compromised. The DOJ is still investigating whether the Russians have so effectively compromised Trump that he can no longer fulfill his oath of office “to preserve, protect and defend the Constitution of the United States."

Democrats may think that it is politically advantageous to spend the next two years merely investigating Trump and hoping the American electorate ousts him from office in 2020. But the crisis in the presidency is real and immediate and requires immediate action. Those in Congress who preach political caution and expediency will be judged harshly by history if their hesitation and political expediency leads America into a genuine national or international crisis over the next two years with a virtual madman at the helm.