Even if you don't plan on voting for him, the contrast between Buttigieg and Trump will only help the Democrats 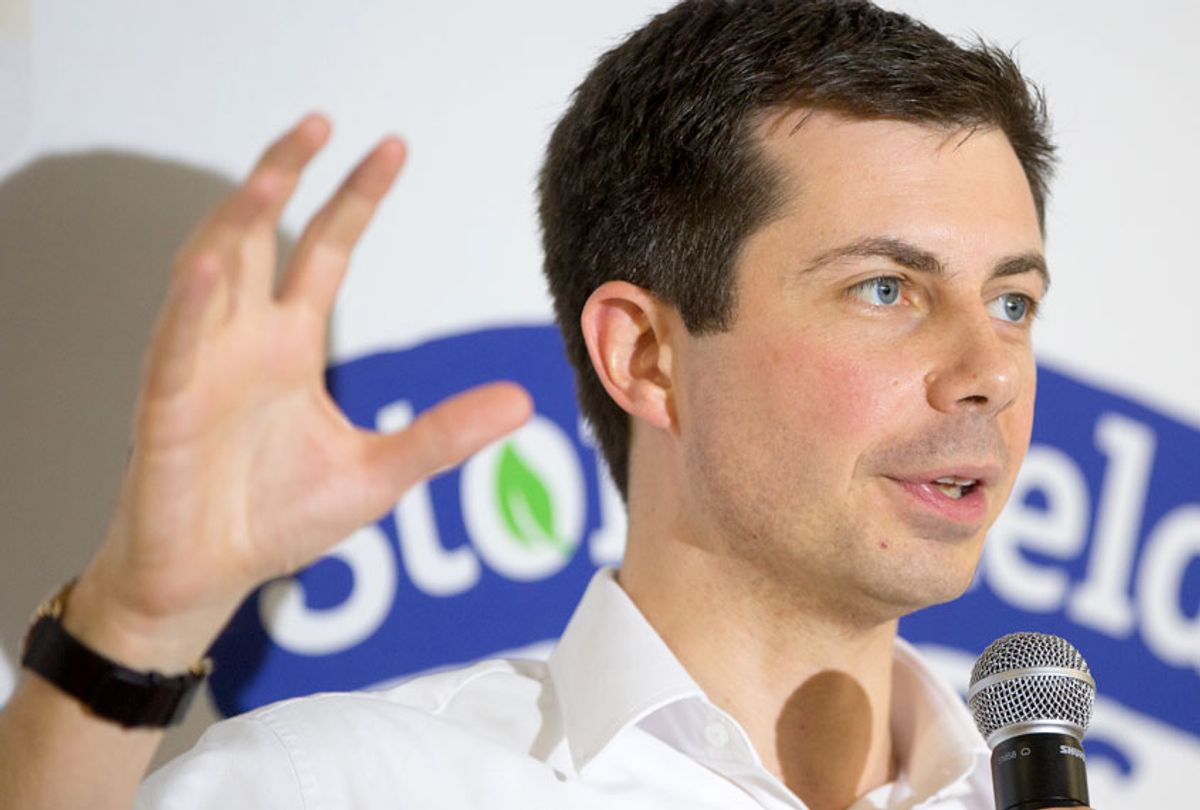 South Bend, Indiana Mayor Pete Buttigieg has drawn criticism for running for president in a crowded field of Democrats that includes many women and candidates of color who have a great deal more political experience than he does. But there's one reason Democratic voters should be glad he's in the primary race, even if they don't plan on voting for him: Every day Buttigieg remains in the national spotlight he exposes the hypocrisy of white evangelicals. In doing so, he's helping to diminish their still-formidable political power.

While the image some may have of white evangelicals is along the lines of illiterate snake-handlers, anyone who has spent time in the community will immediately recognize that Buttigieg is, in nearly every way, their ideal man. He's intelligent and educated, but in a way that reads as traditional and conscientious, instead of challenging or cosmopolitan — he seems like he was more interested in Graham Greene than Michel Foucault in college. He's artistic, but not in an edgy way, with musical skills more appropriate for a chapel pianist than a rock band. He's worked as a naval officer and is a devoted church-goer. He's married to a beloved junior high teacher who tweets about their dogs.

Buttigieg is what most white evangelical couples dream of in a son — except, of course, that he's gay and married to a man. And because of this, Buttigieg is able, both in his rhetoric and identity, to expose on a daily basis how the evangelical talk about "family values" is simply cover for their misogyny and homophobia, and how evangelical "sexual morality" is just a weapon to terrorize anyone who isn't a straight man.

Pence has responded by ignoring his lengthy history of attacks on LGBTQ rights and instead pretending that Buttigieg is attacking him for a privately held belief. But others in the religious right aren't quite ready to fake tolerance for the cameras while working to destroy LGBTQ rights in the shadows.

Evangelical leader and Trump supporter Franklin Graham, for instance, took to Twitter to lambast Buttigieg for his marriage, telling him that homosexuality is something he should be ashamed of, "not something to be flaunted, praised or politicized."

Other conservative pundits and leaders have snatched the bait, attacking Buttigieg as a pervert for his almost comically wholesome marriage, while excusing Trump, a man who literally cruised the Playboy Mansion in searching out women to cheat on his third wife with.

Pastor and GOP politician E.W. Jackson declared that a "normal man is disgusted by the idea of two men kissing" and that Buttigieg is part of a "gay mafia" trying to impose "homocracy" on the country.

Christian right leader Peter LaBarbera declared that Buttigieg "brazenly and openly defies God" and whined that anyone "would be labeled a bigot and a homophobe" for saying such a bigoted and homophobic thing.

A study released by the Public Religion Research Institute (PRRI) in 2017 found that there's been a drastic decline in the number of Americans who identify as Christian, and it's driven largely by young white people abandoning the evangelical churches. One of the main reasons for this exodus is objections to homophobia and the hypocrisy of evangelical leaders.

And young people who do stay within the evangelical community — a majority of whom support same-sex marriage — are starting to speak out about this hypocrisy and bigotry.

Salon reporter Rachel Leah wrote about a compelling example when Indiana evangelical Christian college Taylor University invited Pence to be their commencement speaker this May. In interviews with students, faculty and alumni, Leah found widespread outrage, much of it rooted in fury over Pence's homobigotry. An online petition condemning Pence for rejecting "the Christian ethic of love we hold dear" now has more signatures than there are students in the school.

Buttigieg has garnered some criticism for being what film director John Waters cheekily calls "straight gay people". As Slate writer Christina Cauterucci pointed out, "a gay candidate without such sturdy ties to straight culture" — someone who wasn't "white, male, upper-class, Midwestern, married, Ivy League-educated, and a man of faith" — would probably not find it so easy to be taken seriously as a presidential candidate.

But it's Buttigieg's basicness that makes him absolute kryptonite for the religious right. No amount of screaming about his supposed defiance of God can change the fact that he reads like a nice young Christian man who is kind of boring, and that puts him in direct contrast with the shameless, lying adulterer in the White House.

So Democrats should be glad for Buttigieg's entrance into the race, even if they don't plan on voting for him in the primary. The religious right has, by dint of being well-organized, outsized power in U.S. electoral politics. But the more they're exposed as hypocrites, the more followers they lose, and the harder it is for them to gain and leverage influence. And every day they're flipping out about Buttigieg while they continue to protect Trump,  their demobilization is hastened.