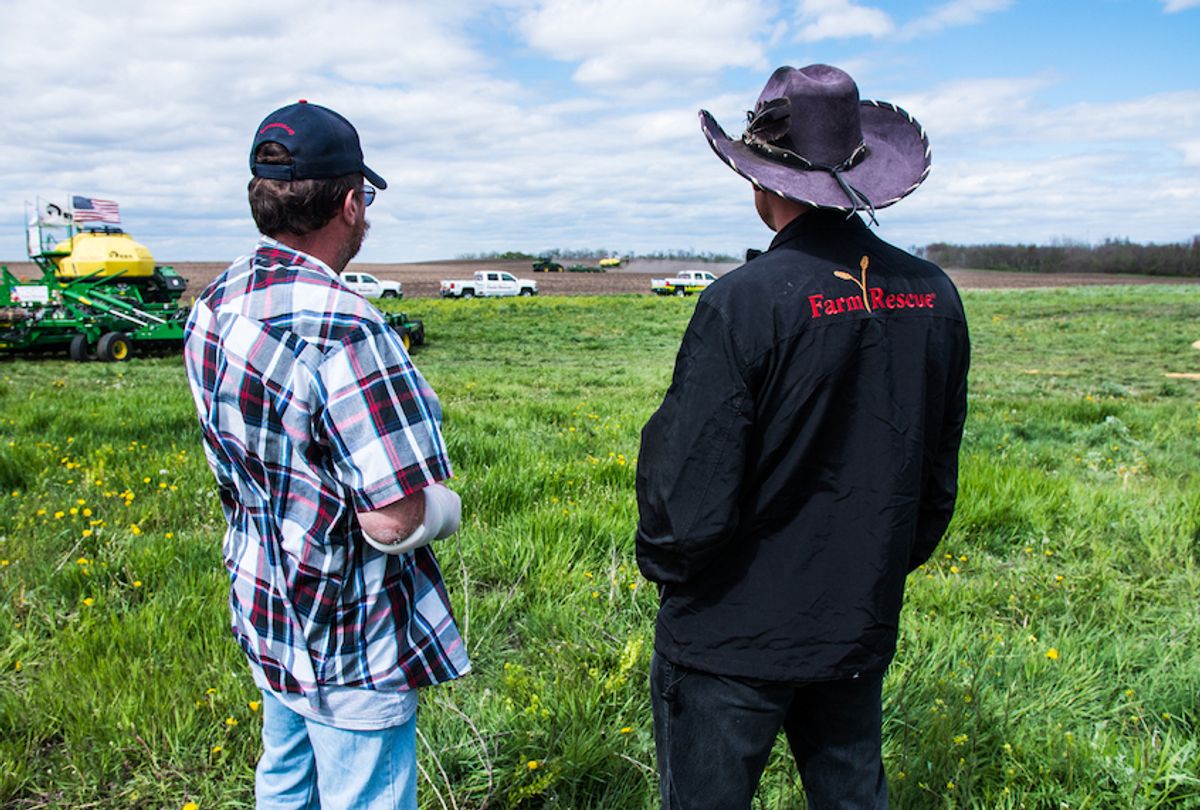 “I’ve never had anything like this in my 40 years,” says Brad Cluck, a beef and hay rancher eight miles east of Omaha, whose hay meadow was completely drowned in the wake of the recent Midwest flooding.

After losing a season’s worth of feed for his animals, Cluck headed to nearby Columbus, Nebraska, where the University of Nebraska’s extension office had organized one of several hay handouts. Once there, he realized there was a five-bale limit — a quantity that would last less than a week on his roughly 600-acre operation. Luckily, he happened to encounter a representative of Farm Rescue, a North Dakota non-profit dedicated to helping farmers in need. The group arranged for Cluck to receive a 30-bale load of hay.

“That will get me far enough down the road and get [my cattle] into the pasture and I’m in the clear at that point,” Cluck says. “My worry went to zero the minute I got a semi-load of hay.” 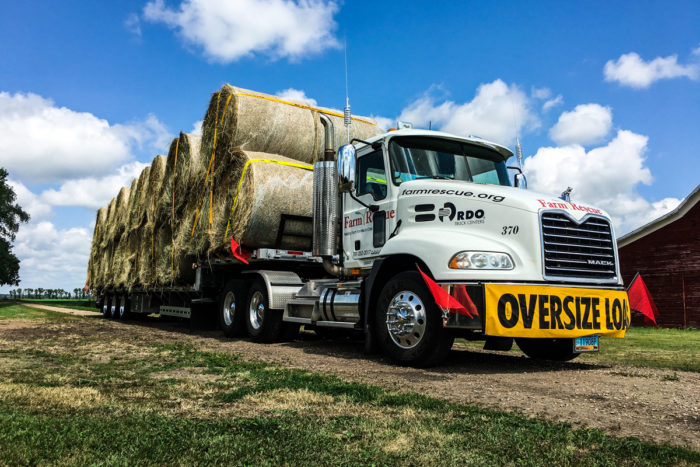 The “bomb cyclone” that caused historic flooding that inundated Cluck’s farm and others across the Midwest in March, followed by a mid-April blizzard, damaged and destroyed everything from roads and levees to homes and farms across Nebraska, Iowa, Missouri, and Kansas and left billions of dollars of destruction in its wake.

Perhaps more devastating than the flooding has been the lack of federal resources available to the farmers whose livelihoods have been literally wiped out as a result.

Bill Northey, the Under Secretary for Agriculture, told Reuters earlier this month that the U.S. Department of Agriculture (USDA) has no mechanism to repay farmers for losses to the estimated 5 to 10 million bushels of corn and soybeans kept in storage bins on farms across the Midwest. Worth between $17.3 and $34.6 million, these largely uninsured crop storages have reached epic proportions in the U.S. in recent years as a result of saturated markets, low prices and trade wars.

Read more Civil Eats: Ag Census: Female Farmers are Coming into Their Own—and Networking is Key to Their Success

While the government has fallen short of helping those whose lives have been upended by the flooding, the community response to the disaster — as shown by Farm Rescue and a number of other groups — illustrates just how much life remains in a region all too often decried as “dying.”

Farm Rescue, which was founded in 2005 by Bill Gross, found Cluck during its second Operation Hay Lift. The operation is part of Farm Rescue’s mission to support family farmers and ranchers enduring crises like major injuries, illnesses, and natural disasters. Funded through donations, fundraisers, and grants from entities including the Englestad Foundation, over the last 14 years, Farm Rescue has helped more than 600 farms with critical donations of equipment, labor, and hay.

So far, the group has organized the delivery of 72 loads of hay ranging in size from a pickup load to a big-rig trailer full—and fencing materials along with a handful of cattle protein supplements. The drops have been made possible by the effort of just a few staff members and 40 or so volunteers from as far away as Michigan. 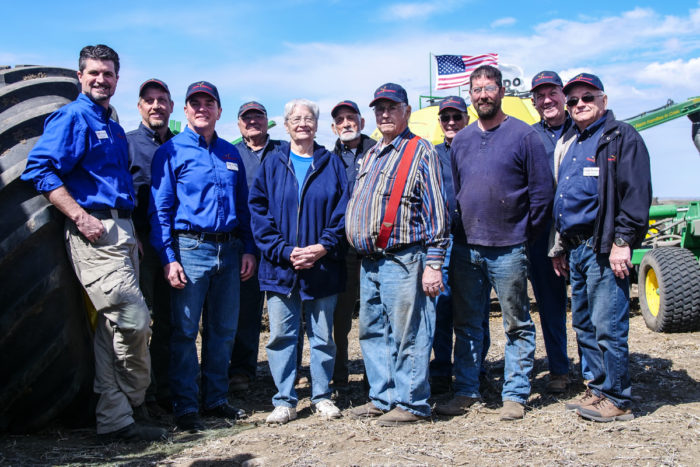 The team of Farm Rescue volunteers and employees.

Gross says the hay drops “will continue to go throughout the summer because pastures have been ruined. These are hard-working people who typically don’t ask for help, but need it.”

After Cluck received help from Farm Rescue, he paid the support forward by helping the organization distribute hay and other supplies with his equipment and connections in the local community.

“Farmers don’t want to sell their cows,” says Cluck, but that’s the likely fate of any farmer who can’t feed their herd for one reason or another. “They love taking care of their cattle, they’re like extended family… there are guys who tear up, they just can’t say enough how much they appreciate it.”

Taking in the rural landscape

Gross, who grew up in Cleveland, North Dakota (population: 83 in 2010), has flown around the world in his work as a Boeing 747 pilot for UPS. Over time, he noticed even from the skies that there were fewer and fewer farms across the States.

“I went to a high school that’s no longer there,” Gross says. “There were too few children to attend to make it viable, and when that [school] closed, the town closed. There’s no gas station, only a post office and a grain elevator. The grocery store and bar closed down at the same time the school did.” 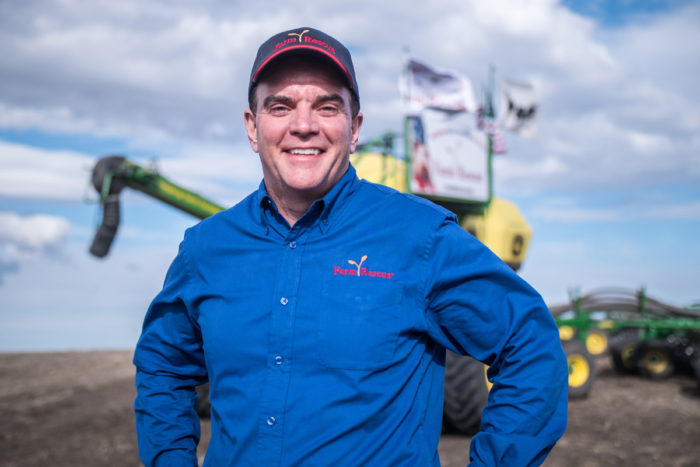 He came of age during the farm crisis of the 1980s and watched the repercussions of farm consolidation ripple across the region. And, like so many farm kids who might want to stay and farm, he was forced to look elsewhere for a viable future.

“My folks couldn’t help with land or equipment or anything, so they told me to go to college and get an education and the farm would be there, hopefully, when I got back,” recalls Gross.

The current farm landscape also makes it difficult, if not impossible, for farmers to help one another other the way they used to because they’re all stretched so thin. In this context, major illnesses, injuries, and natural disasters can often mean certain doom for family farms and ranches.

“In the big cities, there’s all kinds of nonprofits that help people,” adds Gross. He asked himself: “What is [here] to help these hardworking farmers and ranchers, other than each other?”

Originally, Farm Rescue was his retirement dream, but in 2005, Gross shared his vision with a fellow pilot, who then asked, “Why wait until you retire?”

Last month, at the height of the flooding, New York Times columnist Paul Krugman published a piece in which he declared that, like the “backwards” regions of southern Italy, there’s “something the matter” with rural America. “Reviving declining regions is really hard. Many countries have tried, but it’s difficult to find any convincing success stories,” he wrote.

Yet, efforts like Farm Rescue’s fly in the face of Krugman’s logic — and that of other coastal outsiders. In addition to the array of local relief efforts that have popped up in response to the floods’ devastation — just as they have in big cities after events like Hurricanes Sandy and Katrina — many who live in Middle America see evidence of deep-rooted, systemic resources that are creating success stories every day, and have been for at least a century. 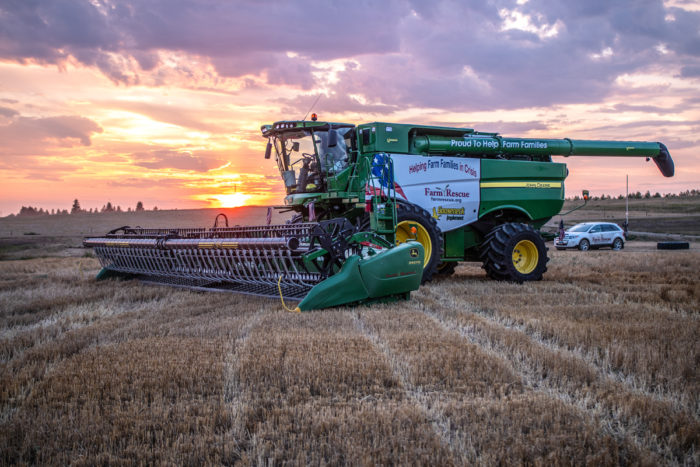 Take the Bank of North Dakota for example. The country’s only public bank, it was created in 1919 explicitly to finance farmers. The institution still operates with a clear directive to support farmers as well as other rural North Dakotans by partnering with small credit unions to give residents banking options, like 30-year mortgages, they wouldn’t otherwise have access to. In recent years the bank has begun to include venture capital under its mission to provide services that promote agriculture, commerce, and industry while explicitly never competing with private business.

Then there’s the University of Minnesota’s Center for Rural Design — the only center in the world that uses design to help rural communities survive by reinventing themselves. [Editor’s note: the Center for Rural Design has closed, but founder Dewey Thorbeck tells Civil Eats that he is now doing the same work at UMN’s Minnesota Design Center.] Nebraska’s Center for Rural Affairs is another “unapologetically rural” organization with a track record of success. It has offices across the Midwest dedicated to engaging the region’s changing communities with its evolving economy and culture.

“In rural Nebraska, we do small business development and 40 percent of our clients are new Americans, mostly Latino,” explains Brian Depew, the Center for Rural Affairs’ executive director. “We’re working in around 12 or 15 small and mid-sized communities that are experiencing high rates of immigrants … there are a lot of small communities out there that are at the beginning of, or are already being transformed by, immigration. These communities are growing as well.”

These are hardly signs of a dying region — but they’re also signs of major change and adaptation that can be a rocky process, as seen in the anti-immigration clashes bubbling up in some parts of the country.

While Gross acknowledges that the tangible side of Farm Rescue’s efforts — the hay drops and labor that often arrives within 24 or 48 hours of need — are the center of attention, it’s the intangible effects of his organization’s work that he values most.

“Helping them out makes it more likely for their children to be able to continue farming or for their children to go onto higher education. If they go out of business or have to take on a lot of debt, they can’t provide those opportunities,” he says. “We’re helping future generations of family farmers.”

All photos courtesy of Farm Rescue.